There are a couple of new videos available featuring Jason Voorhees doing what he does best. The first trailer is a near three minute gameplay look at the upcoming asymmetrical multiplayer game and the progress that’s being made on the crowd-funded title. Check it out below.

The trailer features a collection of gruesome deaths being carried out at the hands of Jason. It starts with a counselor being snatched out of a boat. Another involves a dude getting his eyes gouged out. The next clip sees a guy getting an axe to the gut and then another swing to the neck. The second kill shot is pretty gruesome as Jason has to put in some effort to get the axe dislodged from the counselor’s neck.

We get another clip of Jason curb-stomping the head of a counselor, turning her noggin into a puddle of brain pulp. It’s quick and dirty… a lot like Anthony Weiner’s text messages.

The trailer keeps it rolling, with another counselor biting the dust by getting their head burned off in the fireplace.

We also get a shot of one of my all-time favorite incarnations of Jason… Zombie Jason. Check out that beaut below. 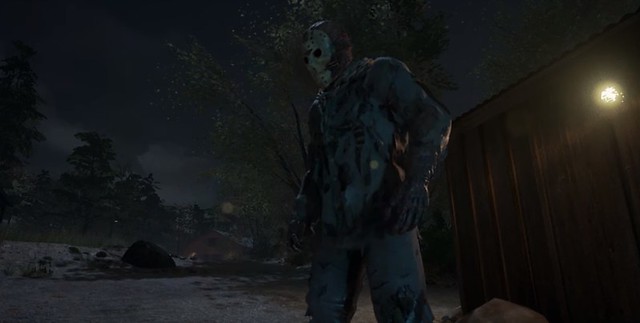 That was the one where he was going against the girl with the psychic powers. It was a crappy movie but Jason looked absolutely frightening in that one.

The rest of the video shows more of the different ways that Jason disposes of his victims, one in particular was enough to make Mortal Kombat X look tame by comparison. Jason sticks a fire poker down the throat of a counselor but the counselor doesn’t die right away… joking on his own blood and struggling to get the thing from out of his throat, the counselor writhes for a while before eventually dying.

The game is due out for the Xbox One, PS4 and PC. You can learn more about Friday The 13th: The Game by visiting the official website.