The Coalition and Microsoft dropped Gears of War 4 onto the gaming public, ushering in the new era of third-person shooting action for PC and Xbox One gamers. The new title stars a trio of new characters with some cameos by a few, older, familiar faces. Some of you might be wondering about the game’s ending and what it all means; thankfully there’s a bit of an explanation for it all.

JD Fenix and his two friends, Del and Kait, try to steal a Fabricator from a COG settlement, which causes them to get chased and attacked by the COG’s drone soldiers. They manage to escape and head back to their village but they get attacked at the village by mysterious monsters. 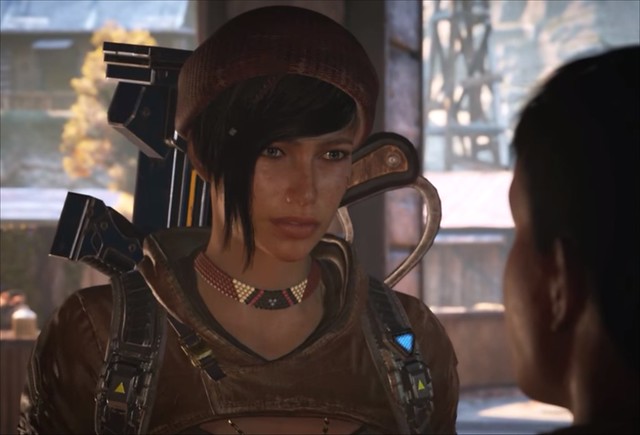 The monsters use Snatchers to snatch up and take all the villagers away. The kids recruit the help of JD’s dad, Marcus Fenix, to help them rescue the villages and get Kait’s mom back. With the help of pops, JD and his wonder friends track the monsters, called The Swarm, to their hideout in some abandoned mines up in the mountains. Marcus ends up getting captured by a Snatcher and the kids end up rescuing Marcus from the Swarm.

While in the Swarm’s lair they discover that the Swarm is actually just an evolved version of the Locust Horde. After the COG defeated the Locust many of them cocooned up in crystal shells, and the COG buried the Locusts in the mine shafts and other burial sites.

The Locusts are attempting to rebuild their army but they’re short on forces, so they use the Swarm to capture humans and put them in the cocoons, which eventually turn them into Drones. The kids find out that everyone from the village have been killed and turned into Drones, except for the leader of the village, Kait’s mother.

When Marcus was captured by the Swarm, he was tapped into their neural network briefly and he discovered that Kait’s mother was being held at a separate Locust burial site. This leads the kids and Marcus toward the burial site, which is near a decommissioned dam.

The kids end up getting help from Baird, Sam and Cole “Train”, who help them get into the main lair of the Swarm using giant mechs. The kids end up defeating a giant Swarm tentacle monster using the mechs, and then they find Kait’s mother hooked up to the Swarm’s neural network inside the burial site cave, where she’s slowly being assimilated into their group as their new queen. Kait ends up cutting her mother down, which kills her.

Kait is given a pendant at the end by her mother before she died, saying it belonged to her “grandmother” but she never knew her. The ominous music hints at Kait’s relation to the Locust queen from the previous trilogy, who was killed in the previous games by Delta Squad. It also hints at what’s to come in the next game.