It’s very interesting seeing Mafia III make the rounds. There’s a lot of talk about the game and a lot of chatter from within the inner circles of the hardcore gaming community. Mafia III is a follow-up to the 2010 2K Games outing of Mafia II, but despite being six years the elder and the developers having way more high-end tech at their disposal, it turns out that the game has far fewer realistic gameplay mechanics and features than Mafia II.

YouTuber Eduard Makarchev put the video series together to showcase that the two games may be years apart but 2K Czech actually invested a lot of time into smaller details and features that helped bring Mafia II to life. For instance, in the video below you can see that fatal crashes cause Vito to die in Mafia II, where-as they just bruise up Lincoln a bit in Mafia III.

The video also shows that weather change is obviously missing from Mafia III. This actually made a surprising difference in Mafia II, including changing the way the vehicles behaved on the road and their handling physics, as well as things like NPCs slipping and falling on the icy roads, and visibility during driving.

Small but noticeable graphical effects like the built-up snow on the rooftops of cars slowly blowing away in the wind while driving really helped bring the immersive elements of the game to life.

One of the things I also really liked about Mafia II was the small interactive segments where you could talk to people, help them or engage in a small cinematic just by walking around town. The random events are partly what helped give Empire Bay a feeling of life and emergence.

But some of the more damning comparisons happen later in the video, where we see that shooting hubcaps has no effect in Mafia III, where-as shooting them in Mafia II causes them to pop off and roll to the ground. Driving aggressively also caused the same thing to happen. 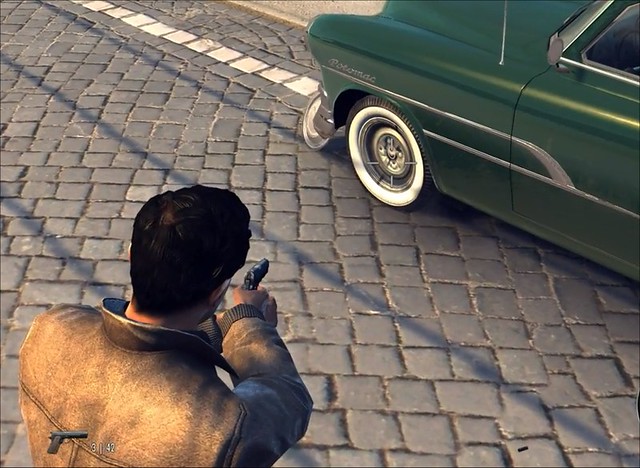 Another thing they changed in Mafia III is that the police and NPC interactions aren’t quite as realistic in the third game. The police in Mafia II would patrol on foot, would break-up fights and even issue citations. One of the really cool things you could do is beat someone up and then stop fighting and wait for the cops to show up and if the person you were fighting kept throwing punches they would cart them off to jail.

Robbing from stores also saw the store owners calling the cops. This would result in a patrol car parking outside, going inside and talking with the shop owner. If the owner gave them your description and you were still around, they might give chase. In Mafia III that doesn’t quite happen.

They also removed the ability to repair engines when the cars break down. 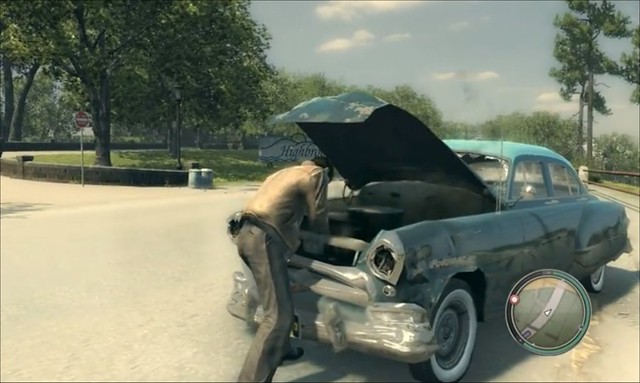 It was pretty intense in a chase if your car broke down but you managed to pull off to the side of the road. You could actually hop out, pop open the hood, do a little bit of fixing and get it going again. This was due to Vito being a mechanic and having magic hands. It was a neat little feature in Mafia II that made it pretty exciting to play.

Customizing cars at the local mechanic is also no longer present, removing one of the key aspects from Mafia II that allowed players to dodge the law by getting the plates changed or altering the color of the car.

In the second video they also show that Mafia III suffers from the arcade-physics disease. The cars that flip over in the third game just flip right back over to keep players in the action. In Mafia II the cars stay flipped over for good.

Other small features, such as full service from gas station attendees is no longer present in Mafia III, something that added a tinge of realism to Mafia II.

The car wash has also been made absent in Mafia III along with not being able to flush toilets, turn on or turn off lights, and interacting with sinks and refrigerators. You could also open and close windows in Mafia II as well as put certain objects in the trunks of some cars.

Bloody footprints are also missing in Mafia III along with procedural animations such as characters standing on protuberant objects such as steps, bodies and curbs.

The fighting system in Mafia III has also been removed, including the combo system, the counter-attacks and the blocking. Fighting in the third game is now like Saints Row 3 and Saints Row 4, where there are automatic takedowns, which is a real bummer.

Picklocking cars and getting your shoes shined or buying hot dogs is also no longer present in Mafia III, along with a lack of PhysX-based smoke effects.

Bribing the police is no longer possible, and they no longer interact with you before trying to kill you in Mafia III.

Ultimately, there are huge downgrades and backward steps in Mafia III compared to Mafia II in terms of interacting with the world, interacting with the NPCs, and a feeling of immersion. Sad times when a game that’s six years old has more immersive features than a newer, next-gen title.