$60 for three games that are supposedly remastered for the Xbox One and PS4. That’s what Ubisoft promised with Assassin’s Creed: The Ezio Collection, which consists of Assassin’s Creed 2, Assassin’s Creed: Brotherhood and Assassin’s Creed: Revelations. However, the final product isn’t even an upgrade over the Xbox 360 and PS3 versions of the game, just higher saturation with high brightness and slightly higher anisotropic filtering.

Various video comparisons were released showcasing the differences between the games, one of which came from YouTuber Cycu1 that had a number of people running to Ubisoft’s defense regarding what could be perceived as downgrades. You can check out the video below.

A lot of Ubisoft fanboys were quick to defend the company, pointing to a blog post they made back on September 13th, 2016 where Mikel Reparaz, an editor at Ubisoft, mentioned that the comparison footage from back then was from two different PC versions of Assassin’s Creed II, writing…

“The following videos were captured using the original PC releases at high settings. They are illustrative only of the games’ content and do not necessarily represent the final quality of Assassin’s Creed The Ezio Collection”

However, there’s no excuse for the most recent comparisons that Polygon and IGN did where we see that the Xbox One version of Assassin’s Creed: The Ezio Collection doesn’t look much better than the Xbox 360 version of the game.

While the frame-rate has been increased, and you can see an obvious resolution bump, the rest of the game looks practically the same other than the aforementioned anisotropic filtering increase. The brightened image and high saturation actually makes everything look worse than the more faded, darkened look from the Xbox 360 and PS3 version of the game. 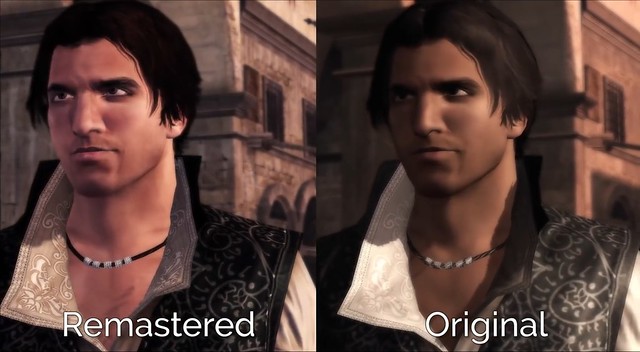 This was also apparent in other comparisons as well. The comparisons that IGN did show that during some of the cinematics the shaders and lighting weren’t present at all. We see that Lucy is a bright glowing blob in the remastered version of Assassin’s Creed II. 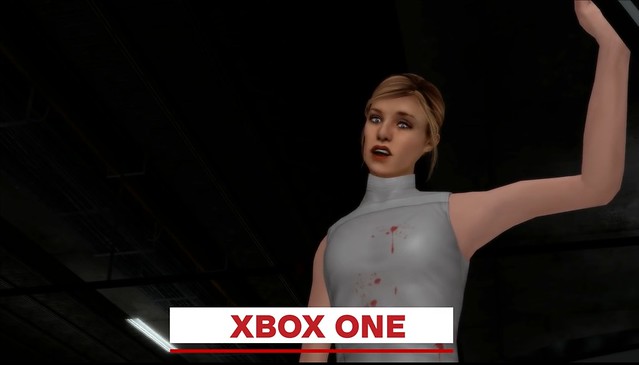 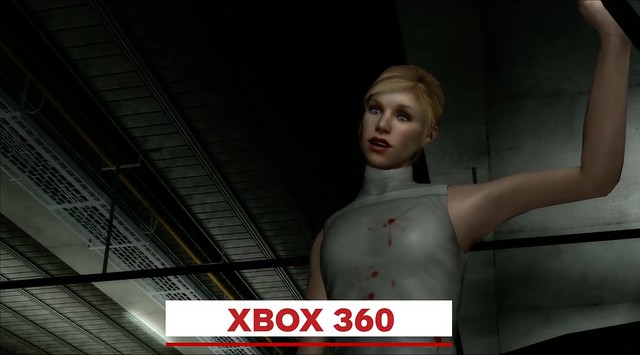 And even worse than that, the Xbox One version uses crushed blacks on the background to completely obscure and mask the lack of lighting. The Xbox 360 at least uses prebaked shadow rendering and keeps the lights on in the background so that you can at least make out what you’re looking at.

It’s almost as if the game was downgraded to run on lower-tier hardware, not remastered for a new generation of hardware. In fact, other than the 1080p resolution, there’s practically just a lot of downgrading going on, which you can see in effect in the video below.

Another huge thing that people noticed was that some of the NPCs look worse for wear on the Xbox One compared to the Xbox 360.

In the final comparison you can see that one of the NPCs on the Xbox One version has no rendering pass for the model shaders since they lack normal mapping. So he’s a flat looking prop as a background object. 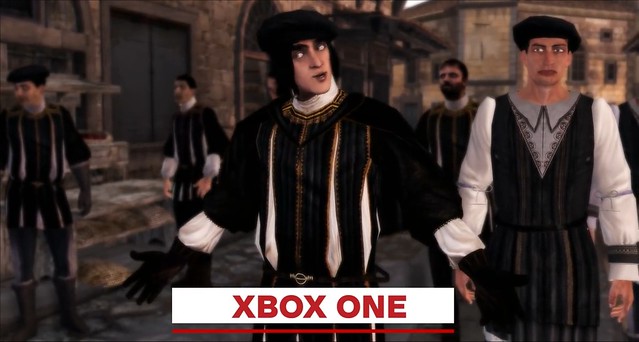 Usually per-pixel or per-object shading is turned off to ease up on the processing power required to render a scene. In this case, the NPC standing in the background has his self-shadowing and lighting shaders turned off. Compare that to the Xbox 360 version where not only is there per-pixel shading but also self-shadowing for the character models, and they avoid using crushed blacks so that you can actually see the depth and range of the colors. 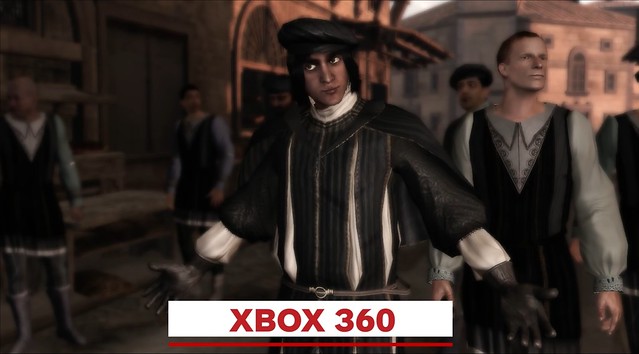 It’s an embarrassing display, no doubt. The fact that these newer remasters are coming out downgraded or side-graded compared to their original release on hardware almost a decade ago should leave people shaking their heads. The proper course to go is to get the game on PC if you really haven’t played Assassin’s Creed II, Brotherhood or Revelations. You’re literally ripping yourself off if you pay $60 for games that have higher resolution on the PS4 and Xbox One but objectively look worse by having turned off so many different graphics filters.