GamesIndustry.biz is reporting that despite the massive dip in retail sales, the game’s actual revenue didn’t get sliced half as much as the actual sell-through of units. According to the article, Call of Duty: Infinite Warfare‘s revenue only dropped by 25% compared to Black Ops 3. You’re probably scratching your head how a game can almost sell less than half of what the previous game did but still make just a quarter less of the revenue.

But despite the shortcomings, GI.biz captured a quote from Activision who was quick to gloat, saying…

“According to GFK, Call of Duty: Infinite Warfare is the No.1 shooter/action game week one launch of 2016 in the UK. Our fans are loving the great campaign, deep multiplayer and ’80s inspired zombies, not to mention the incredible bonus content of Modern Warfare Remastered. We look forward to a great holiday season and beyond”

It’s true that Call of Duty: Infinite Warfare was number one during its first week on the market. The GFK top 10 charts shows that it’s competing neck to neck with Battlefield 1. 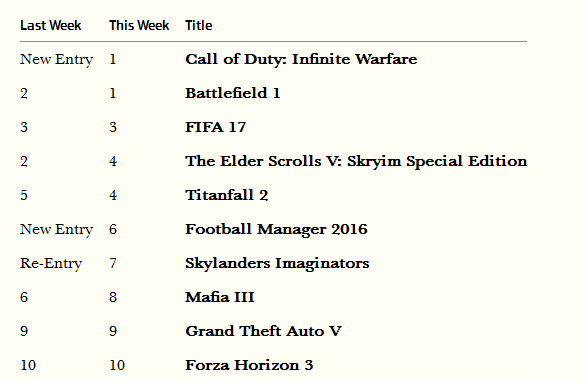 Further down the chart is Titanfall 2, but the interesting thing about it is that I get this sinking feeling as if Titanfall 2 might have a long tail-end if the word of mouth continues to stay as positive as it has been. Most people agree that between Titanfall 2 and Infinite Warfare the former has a far more fun and entertaining campaign. And between Infinite Warfare and Battlefield 1, there’s definitely a lot more variety and a very interesting take on the depiction of war.

While Call of Duty has stormed onto the market with front-loaded prowess, I wonder how well they’ll be able to maintain sales pace beyond the first quarter?