The near 10 minute video has highlights how the developers utilized the different sounds and 3D audio scape to help bring Senua’s psychosis to life.

You can check out the developer diary below.

Ninja Theory stepped outside the boundaries of standard gaming research to bring the voices to life in Hellblade. They reached out to professors working in the field of psychology to better understand how the voices should be portrayed in the game. They used binaural sound capture devices to implement audio that feels as if it’s coming from all different directions.

They obviously put a lot of time and research into the aesthetics and the depiction of psychosis, both thematically and visually, but it’s hard to tell if Hellblade will be a game worth investing in as a gamer. If you’re more-so into story-oriented content dabbling in experimental depictions of psychosis, I think the game works well. But as a game… it’s hard to see where it fits. 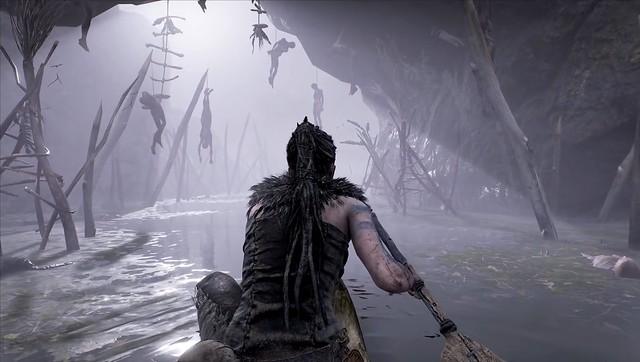 A few comments on YouTube mirrored my own reservations about Hellblade… while we’ve been hearing and seeing more about the technical elements that go into the recreation of a bygone era as well as the time and effort put into bringing mental illness to the awareness of gamers, as a game I’m not seeing much. It’s hard to get invested into the project when – as one commenter brought out – it looks more like a really well done CGI movie. There’s nothing wrong with it being a CGI movie, but if that’s all it is then I know to temper and restrict expectations.

I was really interested in the combat mechanics and a lot of the lo-fi workflows they created for the game to achieve high-fidelity output. It’s been a while since we’ve seen some actual progress on the gameplay front and I really hope they haven’t put the combat and gameplay mechanics on the back burner to focus more on the other stuff.

Right now I still haven’t seen enough of Hellblade to tell if there’s actually more to the game beyond a few hack-and-slash moments and a lot of walking. Hopefully it’s not a glorified walking sim, but even if it is, hopefully we’re made aware of it well before its release on Steam and PS4.