Playsport Games and Sega’s Motorsport Manager is already filling up the libraries of people who were deep desire of a racing simulation manager where they could get control of their own team, their own car and their own staff, battling to make it to the top spot of the season. If you aren’t instantly resolved to cheating using the trainers out there, but need a bit of help in learning the basics of the gameplay and how to manage your way through the career mode, there are is a walkthrough guide available.

YouTuber AlexZafro started a multi-part career mode through Motorsport Manager, covering the lengthy career mode and how to weave your way through the politics of the Indy racing scene. You can check out the starting points of the career mode below.

The game starts players at the bottom of the ranks and they’ll work their way up the rankings, from the regional to the international to the worldwide competitive leagues.

According to the video, you’ll get to participate in the tutorial mode and learn how the game works if you haven’t already. There are three different options for how the session lengths play out, with short, medium and long – each one determines how long the races will be when simulating. Short is between 12 and 20 laps, while medium is between 30 and 40 laps, and long is between 50 and 60 laps.

Alex suggests that the most optimal is the “Medium” option, which will give you 30 to 40 laps to race through. The reason the medium option is suggested is because the short length is so short that you may not get a lot of options or time to flex your strategic muscles before the race is over with. Nevertheless, you can switch between the lengths during the career mode, so you’re not stuck with just one option or the other.

You can create your own character to manage the team, including choosing the gender, the first and last name, the date of birth, the continent you start in and the country you hail from, a backstory, glasses, facial hair, a hair style and a skin tone. It’s surprisingly deep to be a management sim where your character really doesn’t play much more of a visual role than being a representative head during meetings, e-mails and communications.

Having a Politico background trait gives you several bonus points in influencing voting during meetings.

Being an Ex-Driver will give you 30 extra points for driver morale, which will help your driver ease into the racing habits a bit more.

Ex-Engineer will give you a bonus of knocking off a day of designing parts, which is extremely useful when you have to design all new parts in quick succession and you need them before the next race weekend.

The Financial trait will knock off 5% for any financial expenditures, which is extremely helpful when it comes to bringing on lots of staff, ordering lots of parts or having to make a lot of financial decisions that could otherwise quickly drain your bank account.

There are different series available in Motorsport Manager that determine where you start, what kind of races you’ll be involved in and the kind of competition you’ll face. The top tier is the Tier 1 World Motorsport Championship. It has specific rules and regulations before you can compete.

The third and final cup is the Tier 3 European Racing Series. It’s the lowest of the tiers and the easiest to get into. The total price fund is $125 million, which is absolutely nothing to scoff at, and the quality of the championship has a below-average team requirement and specs on the car, so competition isn’t as fierce. There are 10 events in the European Racing Series taking place across six locations spread across most of Western Europe. 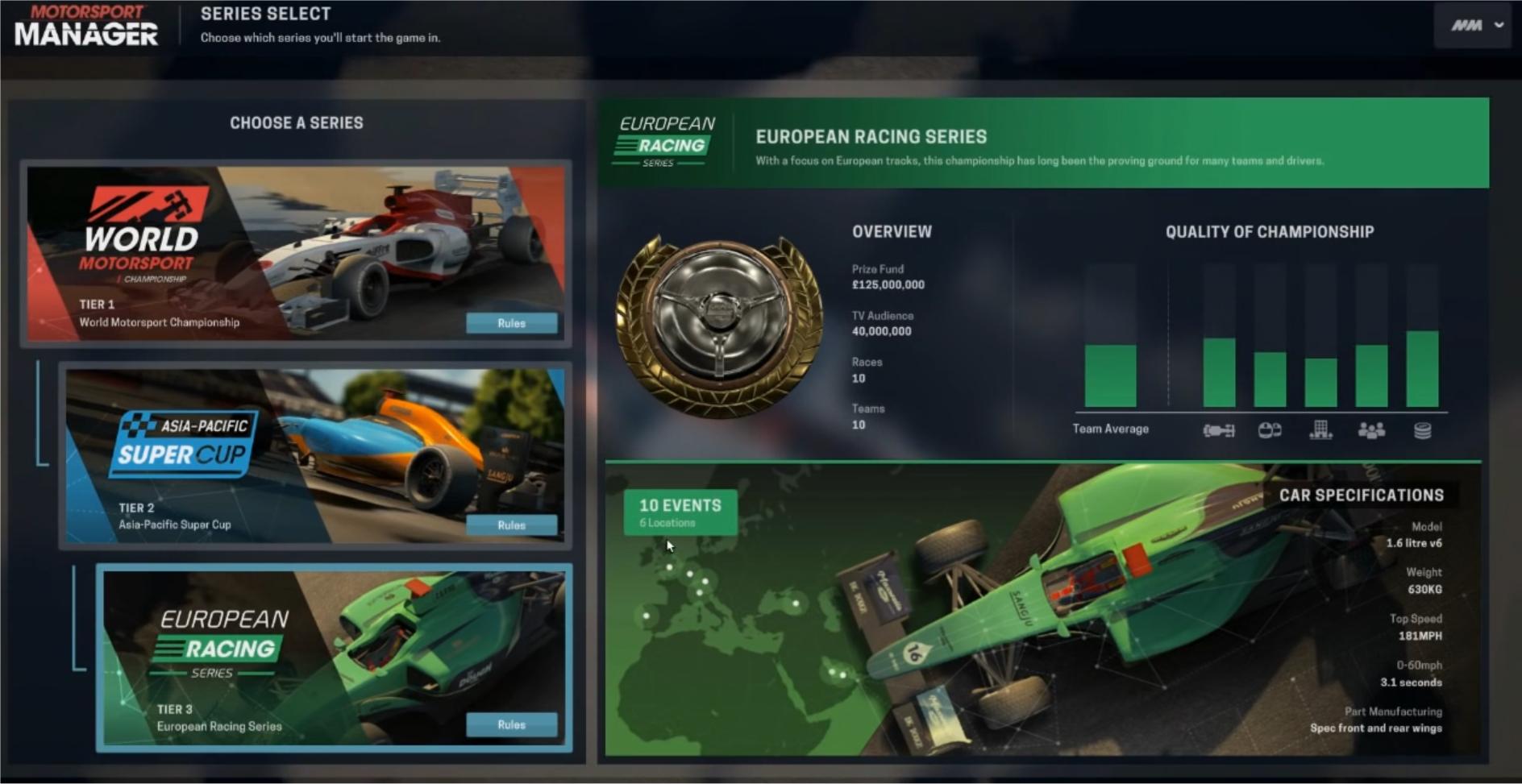 From there, you can choose your team, which includes their budget, their facilities, their driver and their abilities.

One of the first things you can do (or you should do) is get as many sponsors as possible. The sponsors is how you can pay your team, pay your driver(s) and upgrade your car.

Different sponsors will offer different requisites. Keep in mind that if they offer you high payment they usually expect strong finishes, and if you don’t have a driver who you are confident can finish on the pole position then avoid burning bridges by taking sponsorships requiring you to finish first or second place. 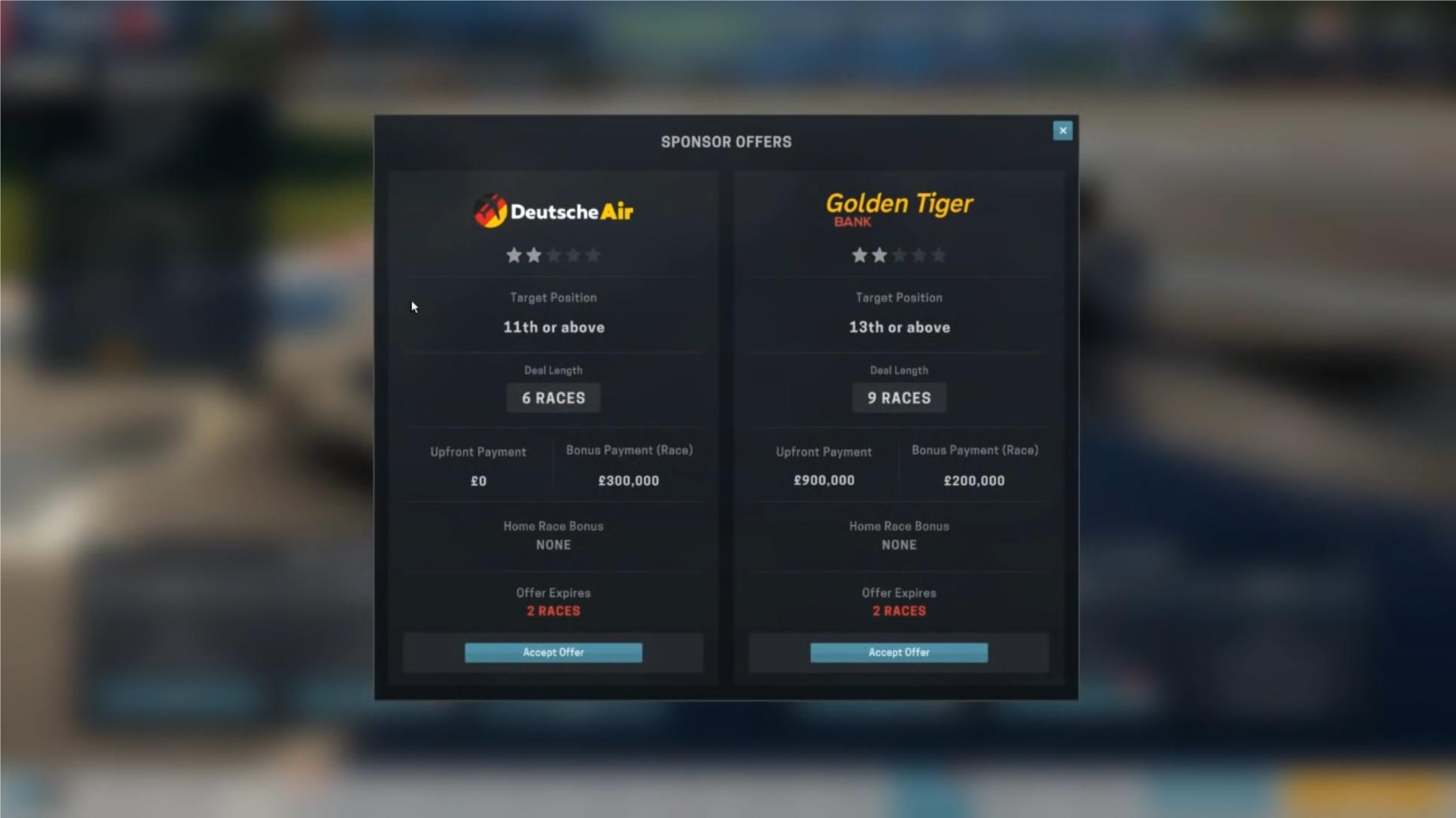 Different race drivers will have different stats, and you can train them up or attempt to try to find a driver who already has solid stats. 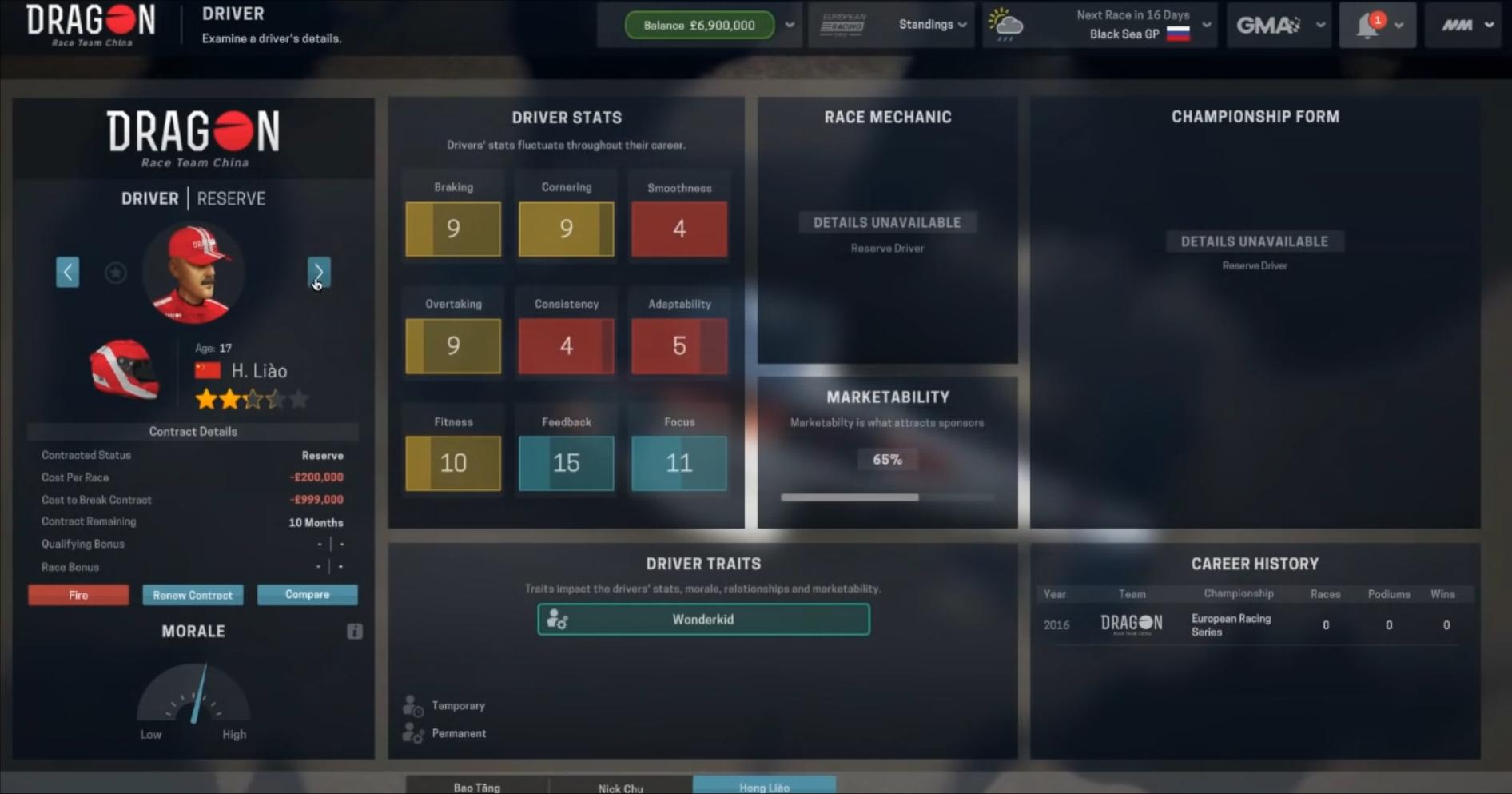 One of the core aspects of the game is building parts for your car and building up the car by designing new parts using your mechanics. The parts can be very expensive so you’ll need to pick and choose what you want to build based on what you need on the track and what kind of racer you want to be.

You can also assign the available parts to the different drivers and their cars so you can get an idea of how they perform on the tracks.

When outfitting your car with the parts, you’ll be able to add new parts, improve old parts or build new parts. It can take anywhere between a few days and several weeks to build parts. It’s best to start building parts at the start of the week and get as much time as possible into building the parts before the races as possible.

In the car setup screen you can alter the livery, alter the parts, or build new ones. You’ll get a look at how the car performs overall and what each of the individual stats look like.

Before you head into the actual race weekend, you’ll be able to tweak your car in just about every way, from modifying the gearbox differentials to changing the downforce to modifying the the tire pressure. 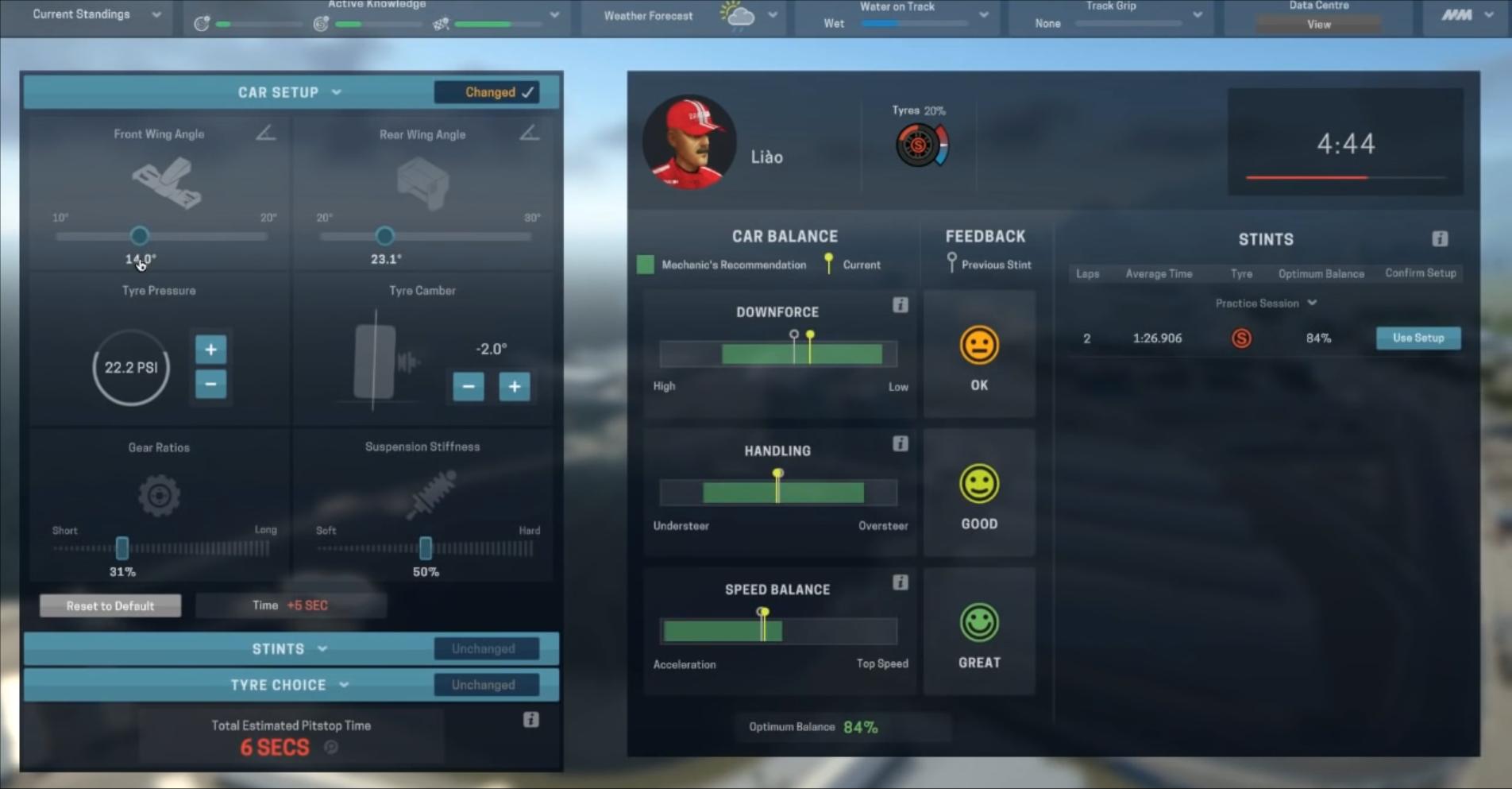 Part of the core of the game is not just in winning races, but also keeping the team happy. Depending on how you outfit your driver’s car determines how happy they’ll be with being on the team, and how well you portray yourself during interviews and media events will determine how happy the chairman and other management staff will be.

While doing interviews can be risky, they can also give your team some visibility and help make the chairman happy, which in turn can pay off big if you can nab some good positions on the grid.

One of the core things to keep in mind is that you will burn through money quickly if you try to go to fast too soon with building up a team, expanding your parts, and trying to craft a super car. It’s best to take things slow and inch by inch, upgrade your car, find drivers that fit the philosophy of your racing ecosystem, and only spend money when you absolutely need to.

Unless you end up getting lucky with a top tier driver on the team with a fast car, you’ll want to focus on getting established first instead of relying simply on throwing money at the wall in hopes of getting ahead. In this particular case, with Motorsport Manager playing it slow and steady will win the race… or rather, the championship.

As showcased in the video below, you’ll need to take weather conditions into account when racing. Rain will require you to utilize different set of tires, which can alter how fast your drivers can go, just the same as a sunny track will require dry-condition tires.

During the actual races you’ll have the ability to pause the race and make strategic changes, as well as monitor feedback from the drivers.

Different settings will alter the drivers’ happiness or dissatisfaction with the way the car handles, so you’ll have to not only tweak the settings based on how well the car handles and how fast it is but also how comfortable each driver is with those settings. 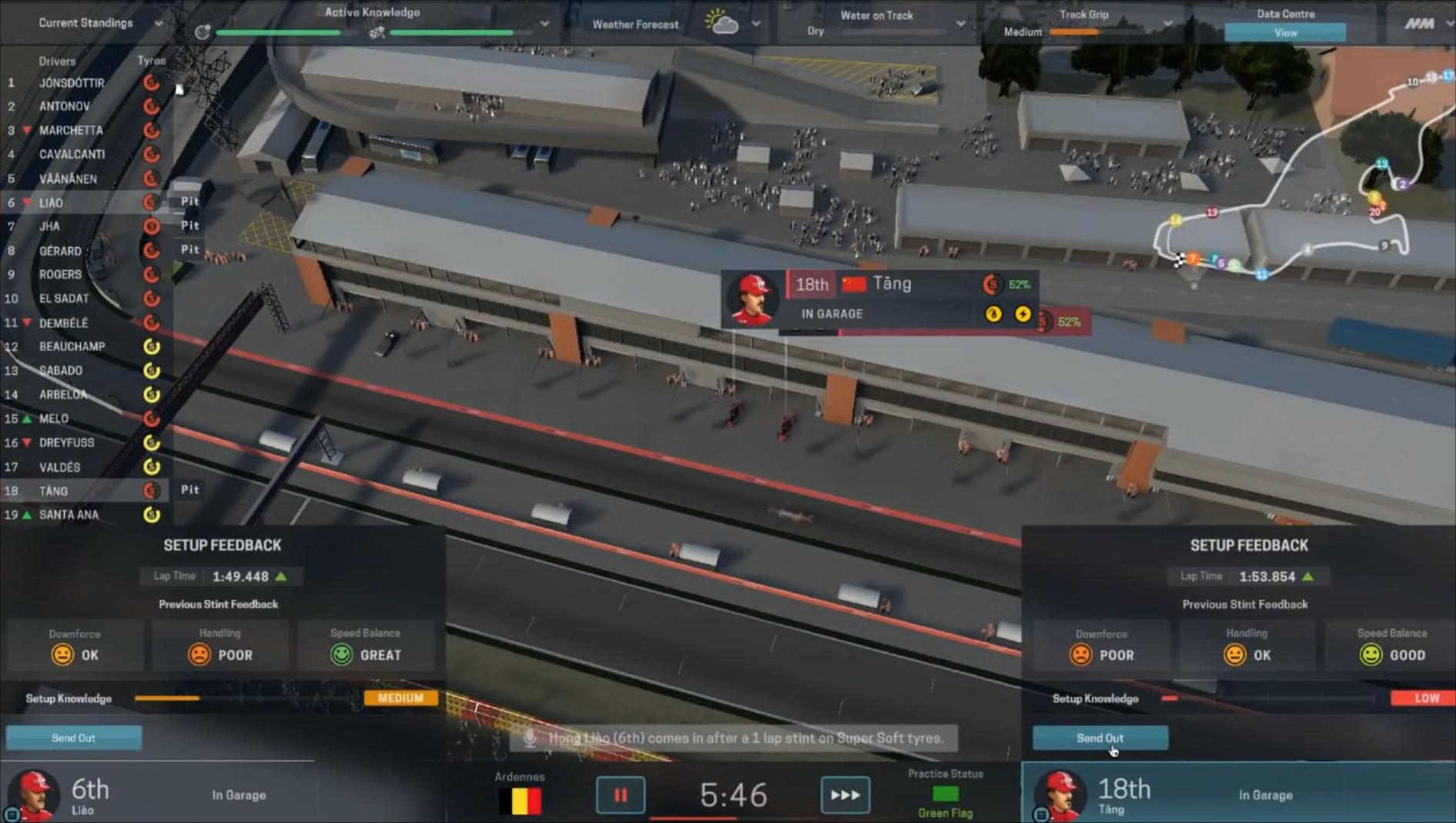 Use the practice rounds to get an idea of what your drivers want and how to best configure the car to their needs. If you do it right the driver will be comfortable enough to push the car to the limit and hopefully bring home a win.