German-born Melina Juergens is the face of Senua in Ninja Theory’s upcoming Hellblade: Senua’s Sacrifice. She’s also Ninja Theory’s video editor, responsible for the development diaries on the game as well as previously having worked on the trailers for DMC: Devil May Cry.

Melina was originally just supposed to be the stand-in model for Senua until they found another professional actress to play the character. Eventually she went from testing makeup and 3D scanning tech, to acting out and emoting for the 3D thespian of Senua.

Melina chronicles her journey from documenting the design process on video at Ninja Theory to eventually becoming the lead actress on Hellblade: Senua’s Sacrifice. She also explains how embarrassed she felt with the acting and how uncomfortable it made her feel.

Melina goes through the process of how she became Senua, first getting her face scanned by 3Lateral, a middleware company specializing in facial capture and animation technology.

They then wanted to scan her body (and there’s no better way for guys to get to see a pretty woman in her tighty-whities if you aren’t dating than to have her strip down for 3D scanning). But first, they needed her to get into a certain kind of shape for the role, so they had her get toned by a personal trainer.

She only had six weeks to get into shape, which required her to eat only certain kinds of foods, lose as much body fat as possible, and pack on as much muscle as possible. She took up boxing, Brazilian Jiu-Jitsu, and weight-training even after going through the 3D body scanning process, just to stay fit and maintain her shape for method acting purposes. 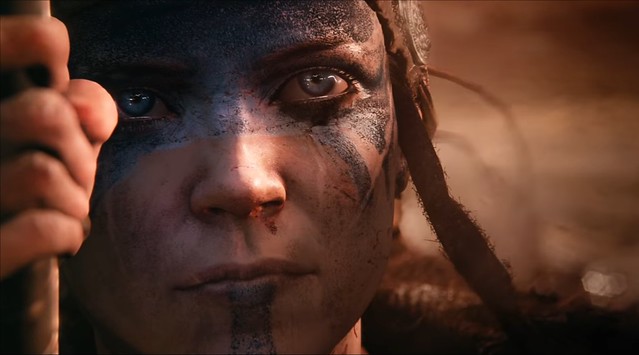 But taking on the role wasn’t just about the physicality and fitness requirements, they also needed Melina to be emotionally adept for diving into a character suffering from mental illness, so she had to spend a lot of time with people who do hear voices, suffer from schizophrenia and have other traits of mental illness.

What was pretty cool was that the GDC presentation for Hellblade was a real-time demonstration of Ninja Theory using their makeshift plugin to capture performances with CG quality render outputs coming directly through the Unreal Engine 4. Melina had to act out the performance in real-time.

Hellblade: Senua’s Sacrifice was recently delayed into 2017 for PC and PS4. You can keep track of the game by looking for new developer diaries posted up on the Ninja Theory YouTube channel by Melina… who is still working full-time as Ninja Theory’s video editor.