A new video has been uploaded by YouTuber and FGC veteran Maximilian Dood. He spends six minutes talking about Injustice 2 and how NetherRealm hasn’t spent much time actually talking about the game in recent months, but he also talks about something just as important: the overhaul of the female faces.

In the video he compares Wonder Woman and Supergirl from the previous announcement builds of Injustice 2 to the most recent build that some outlets managed to get their hands on, and it definitely looks as if some of the characters did go under the digital knife. Check out the video below.

It is pretty obvious that a couple of things have changed with some of the characters. In the case of super girl they tweaked her normals and her mesh.

You can see that they shrunk the vertical height of her eyes, removed some of the underlid skin to give her a tighter look around the orbital bone. They shrunk the fat in her cheeks by the jaw bone so that her cheek bones are more defined. The shader on the face model was also overhauled, with specular highlights accenting those aforementioned check bones, which further gives her face a more chiseled and refined look.

They also modified the self-shadowing, brightening the contrast of the shadow casting so – as Maximillian said – the characters look a little less “creepy”.

Supergirl actually looks a little older now compared to how she appeared in the announcement build, but she does look better. There’s a more hewn and statuesque gait about her face.

Wonder woman also appears to have undergone some surgical refinement in the mesh lab for Injustice 2. 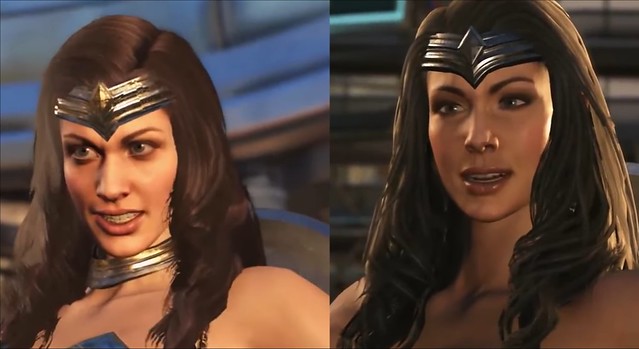 It doesn’t look like much has changed on Wonder Woman but they did appear to thin the bridge of her nose, and shrink the length of her eye height. The lower eyelid bulge has been removed, just like with Supergirl, and the self-shadowing under the eyes have been condensed, instead with a softer shadow shader lining the interior orbital structure. There’s less contrast between the self-shadows and the standard lighting across the face.

They also seemed to square off Wonder Woman’s temple area, where you can see that the eyebrow structure on the right image stops on a more acute surface compared to the eyebrows in the left image where they curve around her temple.

Overall, there’s still a lot more time before Injustice 2 hits store shelves, so we’ll see how they further refine the characters leading up to release on PS4 and Xbox One. For more info be sure to visit the official website.