For the first time in a live television setting, Reggie Fils-Aime from Nintendo of America – along with Nintendo’s creative executive Shigeru Miyamoto sitting in the audience – demonstrated the Nintendo Switch and its gameplay on the Tonight Show with Jimmy Fallon.

Fallon literally couldn’t contain himself during the segment when Reggie unveiled the Nintendo Switch and showed playable gameplay of The Legend of Zelda: Breath of the Wild for the very first time. The demonstration looked smooth as butter, and appeared to be running at 60fps when the Switch was docked. The frame-rate was a little less smooth after it was undocked, but it was still smooth enough.

The Nintendo Switch gameplay was showcased at the five minute mark in the video below.

Jimmy ends up fanboying out because his body wasn’t ready.

Nevertheless, Jimmy talks about all the stuff he likely read on Kotaku. He talks about how Miyamoto came up with the original Legend of Zelda based on his childhood fascinating with adventuring and going into caves, and he stammers through talking about features and content in Legend of Zelda: Breath of the Wild that even I didn’t know existed.

For instance, one of the things I didn’t even know was in the game was being able to shield-surf down hillsides. Like a pro, Jimmy slashes and hacks down some bad guys and then shield surfs down the hill after asking Reggie about it.

Jimmy really did his homework.

He also mentioned that he re-watched the Nintendo Switch ad “a million times” and seemed to actually know his way around the console even though it was his first time getting hands on. He showed off the kickstand on the back of the device and actually managed to beat Reggie to the punch in discussing all the features of the Nintendo Switch. 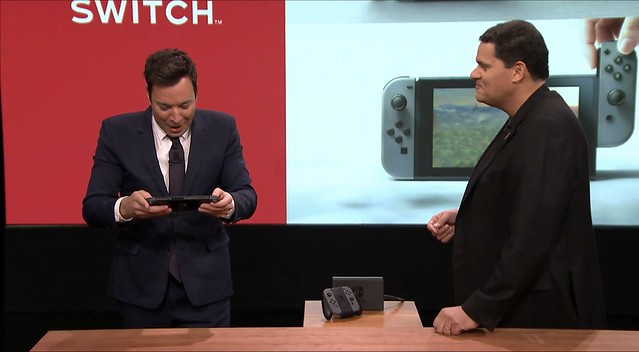 It’s crazy, but Nintendo’s best marketing to date came from a late night TV show host who showcased how much of a Nintendo fanboy he is.

It’s not a knock against Fallon, though. I’m right there with him. I’ve hated most of eighth gen because it sucks, but the ninth gen is looking really good with the introduction of the Nintendo Switch. It’s shaping up to be a day-one buy for me.

We’ll get to learn more about the Nintendo Switch come January 12th, 2017, when Nintendo hosts another Nintendo Direct and gives gamers something to really look forward to at the start of the year.

Pricing hasn’t been revealed yet but rumors put the console at a $250 price point. You can expect to get your hands on the Nintendo Switch starting March in 2017.