Avorion recently released into Early Access for Steam. The game is a sci-fi space sim where players can build their own ships, craft their own space stations and venture throughout the galaxy in order to discover the mysteries sitting at the center of the universe. Well, for gamers who are just getting started and need a bit of help getting their bearings and some tips on crafting a ship, we’ve got you covered.

YouTuber Kane Hart has put together a playlist of videos for Avorion covering all of the game’s basics, as well as some of the more complex elements of the game. You can check out the video below.

The game is described as being like a cross between Freelancer and Empyrion. Now if you want to start constructing you’ll need some resources first. So mine some chunks of ore from any nearby asteroids.

Once you have enough resources, click on the “Found Ship” icon on the top right hand corner of the screen. It’ll require about 500 iron just to get started.

Press ‘B’ on the keyboard to open the build menu so you can begin constructing your ship.

Kane explains that the right hand panel with the various colored text indicates what’s “bad” about the ship, where-as the yellow indicates a “warning”. If all the text on the right is white, then you’re good to go.

You can click on the expansion button by pressing the plus block at the bottom of the screen on the far right side of the block menu.

You can shrink and expand the block size by holding ‘W’. You can use ‘S’ for vertical expansion or shrinkage. You can also use ‘A’ for horizontal expansion or reduction.

You’ll need a crew quarters so you can recruit and put people in your ship. You can also use the merge option to connect blocks.

The advantage of merging blocks is that they increase the overall HP of the block section as opposed to using individual blocks. So a giant merged block of crew quarters will give you more HP than individually using 8 small blocks for the crew quarters.

You can also merge blocks such as thrusts, which can sometimes alter the performance depending on whether you merge the thruster blocks or not.

Depending on how much power your ship generators depends on how many weapons you can add. If you add too many weapons you won’t be able to craft your ship, so check to make sure you have enough slots for what you intend to use the ship for. You have armed and unarmed weapons; unarmed weapons are things such as laser mines used for mining asteroids and ore.

You can also use drones on a ship to survey and recon an area without using your main ship. You can re-enter your ship by selecting your ship and pressing ‘F’. Press ‘Enter’ to return the drone back into the ship.

You can also hire crew members from nearby space stations. The amount of crew you can have on your ship is dependent on how many crew unit blocks you added to your ship. 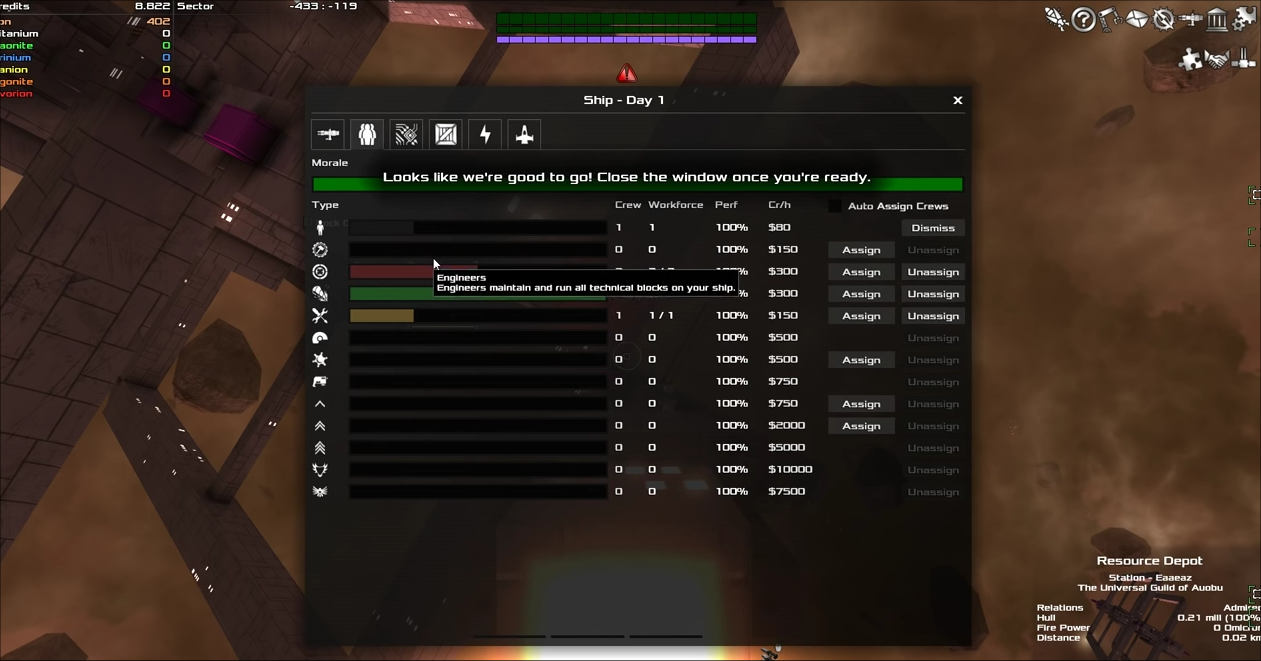 Once you hire a crew, you can assign them to different tasks to operate your ship.

Later into the game you can also add upgrade modules and hyperjump to new sectors with an advanced hyperdrive system. When you pull up your node map you can see where you can warp to based on the size of the blue square grid on the map – anything within the grid you can hyperjump to.

Select a sector from the map within the blue radius. You’ll have to wait until your nav computer makes the calculation complete and then tap the Spacebar to hyperjump.

You’ll need to manage your battery and keep the engines cool, which will heat up after every hyperjump.

From there, you can explore the galaxy, mine ore, complete missions and build new ships.

You can check out Avorion over on the Steam store, which is currently in Early Access for $17.99.