The Brotherhood released the free standalone story for Stasis called Cayne. The standalone game centers around Hadley, a pregnant woman trapped in a bad situation. For gamers in need of a walkthrough of the isometric horror game, this gameplay walkthrough guide for Cayne might help.

The first task involves getting off the extraction table, so grab the scalpel from the nearby table and use it on the figure in the suit. Hadley will kill the figure and avoid being cut up by the machine. If you need to see how to perform the task you can check out the gameplay walkthrough playlist from YouTuber Nokzen.

When the computer attempts to scan for Hadley, step into the green scanning phase and it will recognize Hadley. Activating the extraction arm will grab the dead body instead of Hadley, resulting in a fiery explosion. You’ll be able to escape from the room and head through one of the service tunnels after falling through the floor.

A twisted version of the scalpel is on the floor. Take it.

Head through the tunnel into the next room.

To progress, you’ll need to head back up to the destroyed surgical room using the overhang. Grab the PDA to read up on Hank, the man that Hadley killed with the scalpel.

Grab the sealed protein powder and use the mangled scalpel on it. Power the powder on the ARM control console to reveal the fingerprints for the terminal security commands.

It’ll reveal the PDT printer lab password, which is a health sign, lightning sign, a play button and another health symbol, as indicated in the image below. 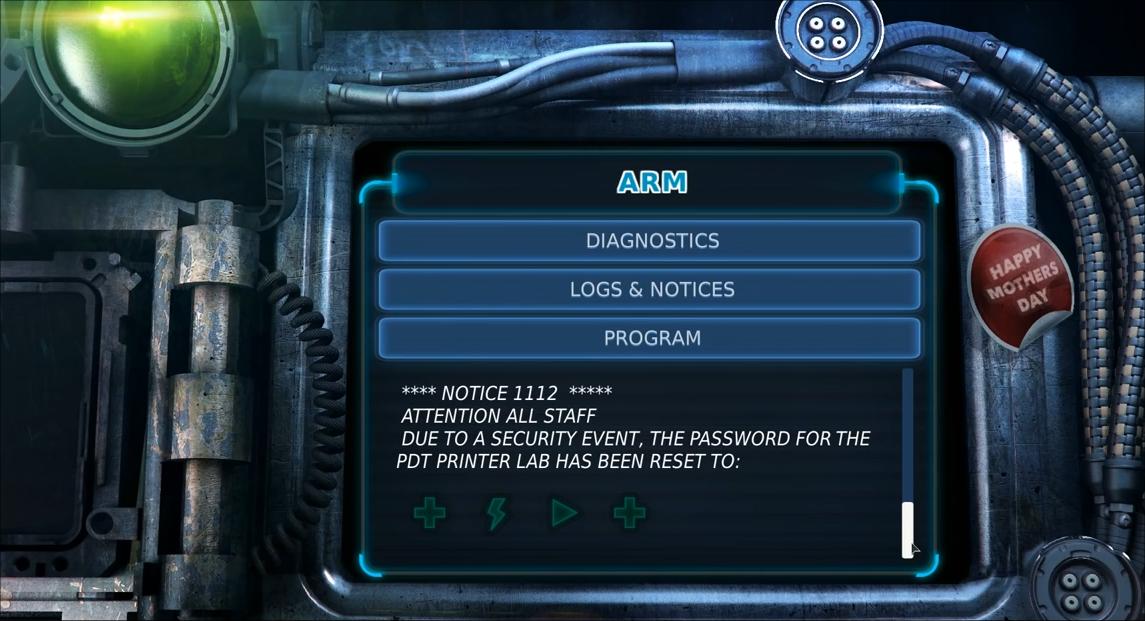 You’ll need to click on the servos calibration, which will dislodge the sharp bladed pincer. Climb back down and grab the blade. Use the blade on the exposed insulation to open up a hole in the access tunel.

Use the control panel and eject the power core. Search through the severed legs to get the ID card.

Climb back up the service tunnel and use Danie Boland’s ID card on the locked Omni-Tek service panel in the room with the mutilated body hanging over the table.

The panel will grant you access to the Omni-Tool.

Head back down the service tunnel and use the Omni-Tool on the service platform. At the four minute mark it’ll show you how to overload the server platform and blow up the power generator. 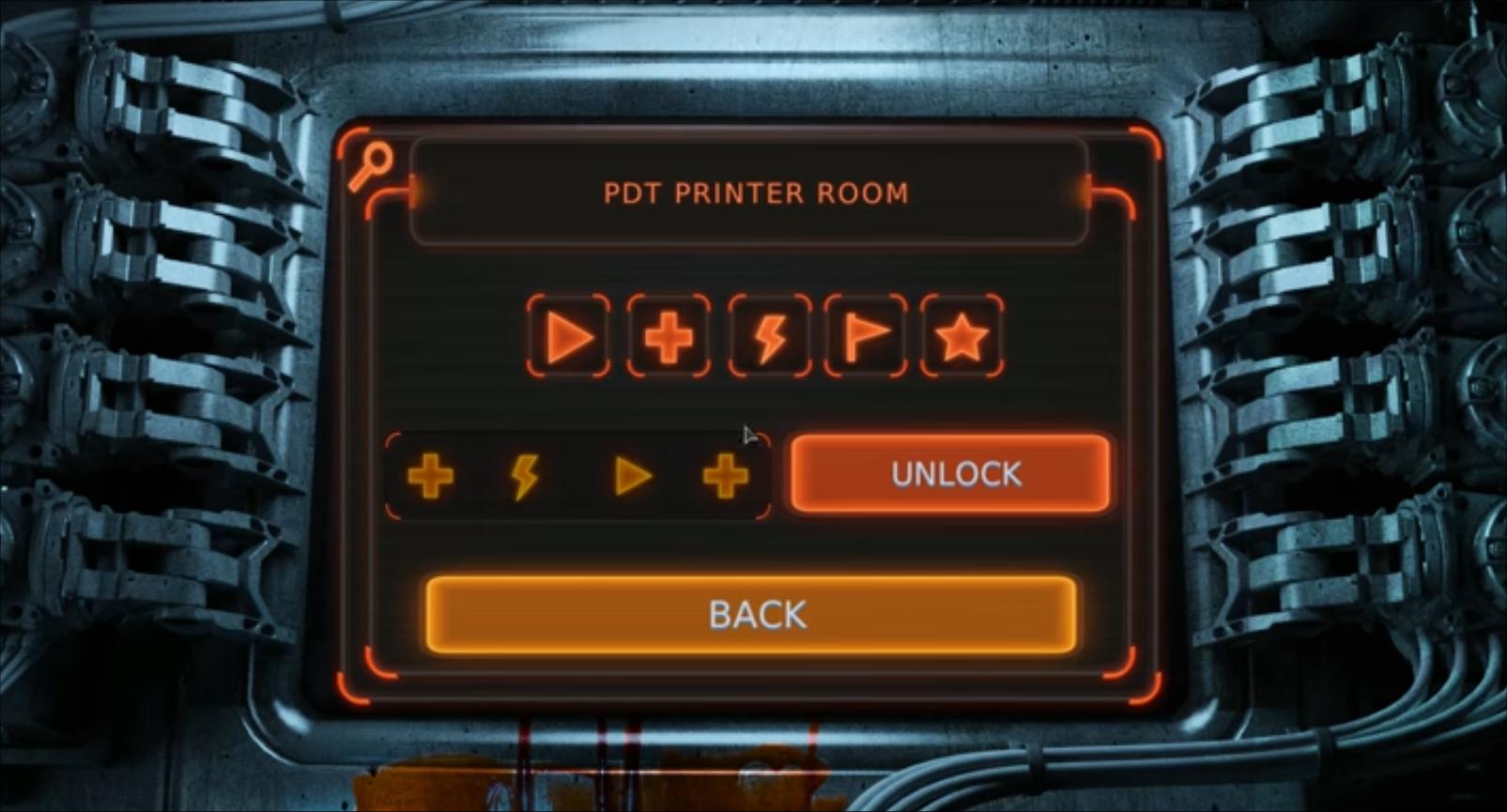 Combine the powder with the ID card. Click the ID card onto the broken fuse. Exit the screen and then go back into your inventory and use the pincer blade on the powdered ID card and shape it into the fuse. Use the fuse ID card on the fuse box to open the door.

You’ll need to use the Personal Data Tag Printer to print a new PDT. 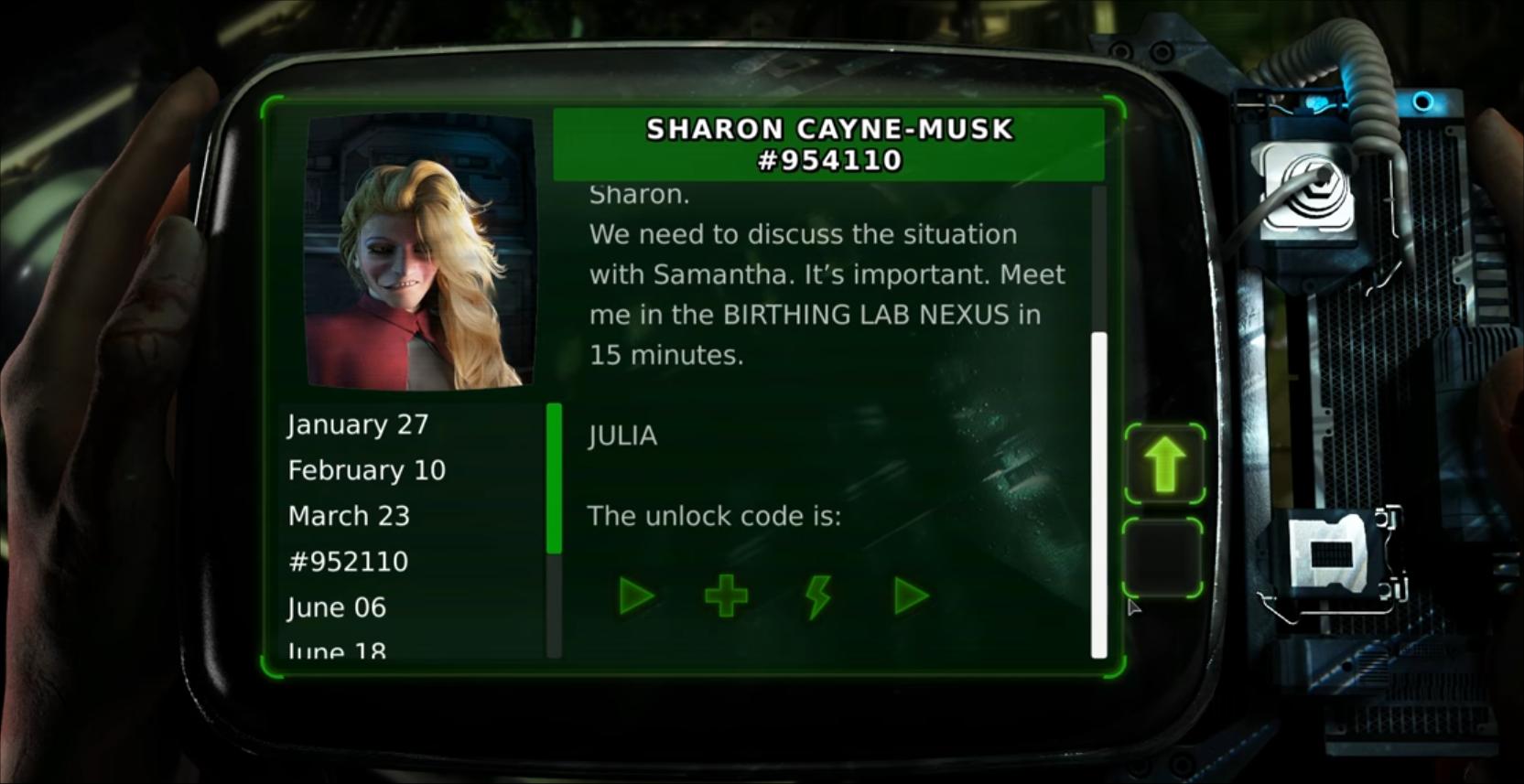 If you head into the Birthing Lab Nexus and access the terminal to read the Grub Habitat manifest. It will contain the code to the Crew Facilities.

You can use the following code to gain access to the Crew Facilities: 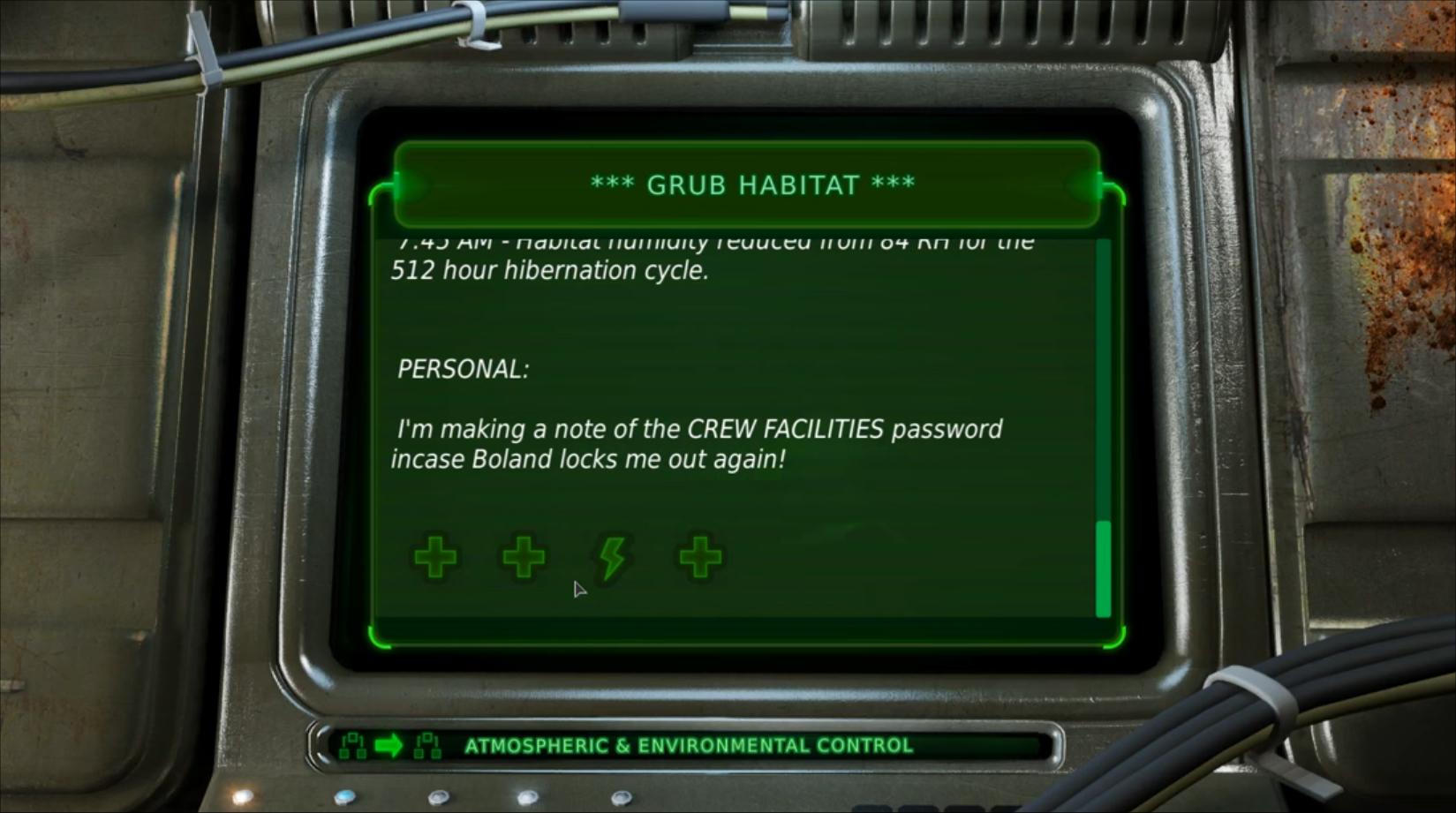 Inside the Birthing Lab where the vat of blood is, there’s a whip hanging in the ceiling next to the PDA of John Kearn. Take it. Take the voice recorder as well.

Use the Security Access in the main vestibule to open the Crew Facilities.

Use the Voice recorder on the boom box.

Head through the corridors to the room filled with blood. There’s a safe on the wall with a picture of Joseph on it; take the picture.

There’s a blank PDT on the floor by the bloody bed, be sure to grab it.

Combine the stripper pole with the blade and head back to the Birthing Lab and use the makeshift lever on the floor panel where the giant disembodied womb is.

The vat of blood will fill up and raise the body up high enough so you can grab the broken PDT from it. Hadley will be pulled down into the vat and end up in the stasis room with Cayne.

Head over to the cryo controls and take the cryo unit.

Use the broken PDT and blank PDT on the PDT printer in the PDT Printer Room. Use the cryo-regulator as well to print the new PDT.

When you get back to the main hall where the security barrier has been broken. Don’t go near the elevator. Head into the other room on the top floor and take the fire suppression cylinder.

Head back to the crew quarters and proceed into the main access and use the fire suppression on the smoldering wreck. Walk over the melted metal and head into Joseph’s room.

You’ll need a DNA sample of Joseph to access the personal safe. Use the photo from your inventory. You’ll also need a voice sample; use the voice recording from the voice playback you get from the boom box.

Inside the secret chamber there’s an empty incubation canister. Use the whip on the grub monster to make it lactate milk. Pick up the milk and place it inside the empty canister.

Head back to the “The Hobo”’s room and access the Atmospheric & Environmental Control module. Change the humidity to 84 degrees and the temperature to 95 degrees.

Proceed to the Birthing Lab and use the milky canister on the Grub Habitat retrieving platform.

When you get the grub in the canister head back into the power room and place the canister in Danie’s blood. Samantha will step into the force field and Hadley will split her in half.

Head back to the vestibule and make your way to the elevator.