The 2017 EVO championship series line-up has been revealed. The main eight games have been determined and the ninth game will be a player-choice title, selected from a number of classic and upcoming games.

Event Hubs rolled out the details on the list, with the following games making the cut for this year’s EVO 2017 tournament, set to take place in Las Vegas, Nevada.

I don’t care about getting hyped about anything else on that list except for King of Fighters XIV. Glad to see the king is back, baby!

SNK missed out on last year’s EVO due to King of Fighters XIV being set to release after the tournament in August. They were a whole month off. However, they pulled it in tight, got their act together and released a noteworthy fighter for the PS4. Hopefully at EVO 2017 they announce a Steam version because that would be legit!

Anyway, a bunch of people got salty because two Smash Bros., games will be at EVO. I do agree that there should only be one Smash Bros. I have no idea why Mortal Kombat XL isn’t a shoo-in, but that’s just the way the dice fall.

However, you can vote for Mortal Kombat XL to make an appearance as the ninth game by donating to the charity drive. Mortal Kombat XL is joined by Windjammers, Street Fighter II Turbo, Killer Instinct, Ultimate Marvel vs Capcom 3, Skullgirls and the Nintendo Switch exclusive, ARMS. 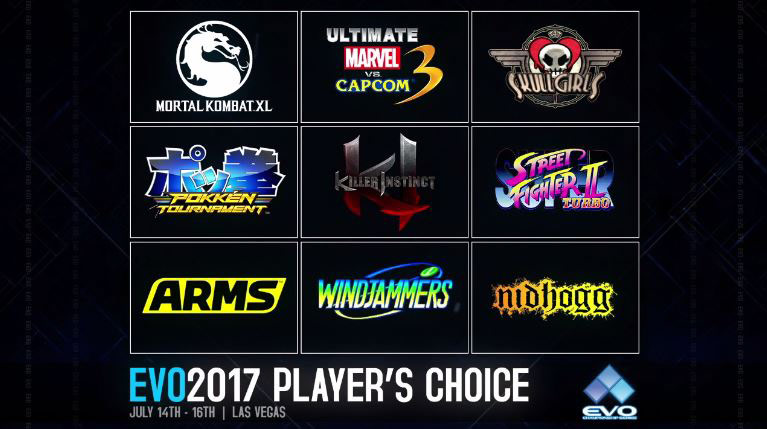 The inclusion of the completely unknown ARMS sent the Twitter-verse into tizzy. A lot of people are now both excited and trolling to raise awareness of the Nintendo Switch exclusive. However, donations will determine what makes it in, not just troll tweets to make a game trend. 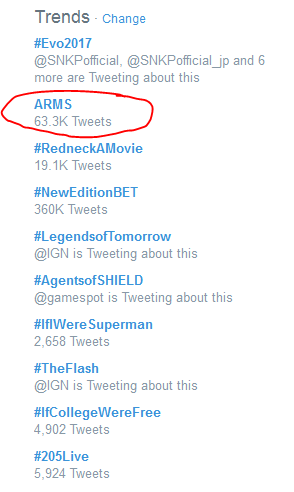 Realistically, expect the Ultimate Marvel vs Capcom 3 fans to pull through and make the final Player’s Choice selection. No other game on the list has the same level of clout or fanboys gunning for it. Killer Instinct is barely a shadow of its former self; Windjammers is kill; and Capcom has milked Street Fighter II more than the udders of cows on a dairy farm being milked by Tulsan’s electric milkers. There’s no way people would pay to see that old busted up game played at EVO 2017.

After the Skullgirls censorship the audience just doesn’t seem to talk about it much anymore, and Pokken Tournament is way too low-tier to warrant a large amount of support.

The only games I could see rivaling Ultimate Marvel vs Capcom 3 is Mortal Kombat XL and maybe the combined arms of Nintendonites supporting ARMS just so Nintendo’s new console gets to grab the spotlight on the biggest FGC e-sports tournament of the year.

We’ll find out what the final game is when the Player’s Choice charity drive concludes on February 8th. You can contribute to the game you want to see at the finals via Generosity.com.