You can’t always go by YouTube comments and ratings… and then sometimes you can. The ratings and comments for media properties like Call of Duty: Infinite Warfare and the 2016 reboot of Ghostbusters actually did seem to reflect sales trends. The excitement exhibited by the ratings and comments for movies like Deadpool also seemed to translate well into sales. So what happens when a beloved franchise is revived by a lesser known developer, a smaller publisher and with no concrete PC release date in sight? Well, you get the Flatout 4: Total Insanity trailer from PQube.

The trailer recently went live over on YouTube, featuring gameplay for the upcoming carnage-based racing series, which is scheduled to arrive on PS4 and Xbox One this upcoming March.

You can see what the teaser trailer looks like with the 45 second clip below.

To be fair, Kylotonn Racing Games, the developer behind this latest iteration in the decade-old series, appears to have managed to capture the speed and destructive elements present in the older Flatout games, but I can’t help but feel as if there’s a strong sense of Twisted Metal lodged in there.

There will be 27 different customizable vehicles in different tiers, just like the previous games, 20 different tracks, and the return of the Stunt Mode, where players throw their driver through a number of different obstacles across various mini-games.

New to Flatout 4 is the Assault Mode, which is what reminded me of Twisted Metal. The Assault Mode allows you to pick up and use weapons to slow down or destroy your opponents.

The YouTube audience wasn’t too thrilled after they saw the teaser trailer, though.

The comments are definitely a lot meaner than the video rating. 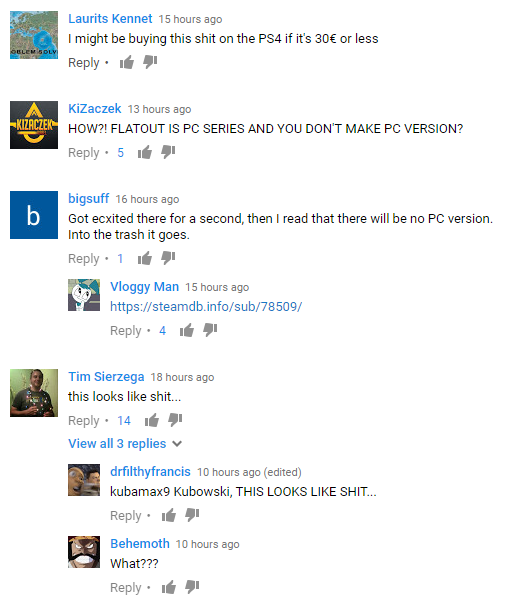 One thing worth noting is that a lot of the downvotes are actually coming from people who are angry that it’s not listed for PC. However, that isn’t entirely true. Flatout 4 is listed for PC in the press releases as well as over on the SteamDB page.

The game might be delayed on PC for whatever reason, but it still seems to be coming to PC at some point.

As for the actual gameplay… it looks like an adequate sequel to Flatout. I kind of wish they had more of the simulation driving and skill requirements from the original Flatout as opposed to the more arcade-route they went with the latter games, but beggars can’t be choosers. I suppose a lot of people were expecting something more akin to Wreckfest but bigger and actually finished, but this may have to do… for now.

You can look for Flatout 4 to launch this March on PS4 and Xbox One. Hopefully the PC version isn’t too far behind.