One of the big worries I’ve had about Ubisoft’s upcoming Ghost Recon Wildlands is whether or not the vehicles blow up when hit a few times by gunfire. Well, that question was finally answered thanks to a lot of the gameplay footage being uploaded on YouTube by YouTubers.

Outlet OutsideXbox has been posting up a ton of footage of Ghost Recon Wildlands, featuring lots of different kinds of scenarios and options and gameplay mechanics on display. While Jane spent a lot of time goofing off in various videos, it also helped to showcase some of the variety and spice of life offered within Wildlands, ranging from farms with animals and operable tractors, to rebel bases, silver mines and salt flats where cars have crashed into ditches.

The most notable thing about the 16 minute playthrough for me was finding out that cars don’t instantly blow up.

One of the most annoying features in GTA V is how quickly vehicles catch fire and explode. A few shots from the assault rifle and a vehicle is flaming and smoking and completely unusable. In games like Just Cause it only takes a few well placed shots to either drive a car off the road or turn it into a moving heap of destructive explosives.

In Ghost Recon Wildlands the damage to vehicles is a heck of a lot more proportionate to weapons being used. It takes a bevy of grenades to blow up larger vehicles, and a hail of gunfire to disable smaller vehicles. Instead of just shooting any part of the car and watching it explode, you can shoot out the windows, shoot out the tires, shoot the doors and even take out the driver and passengers. It’s a lot closer to the likes of GTA IV or the older Ghost Recon titles before Ghost Recon: Future Warfare.

Another thing we get to see is the support wheel. You can call in rebels to drop off vehicles, offer their services during a battle, use mortars against enemies, or create diversions. 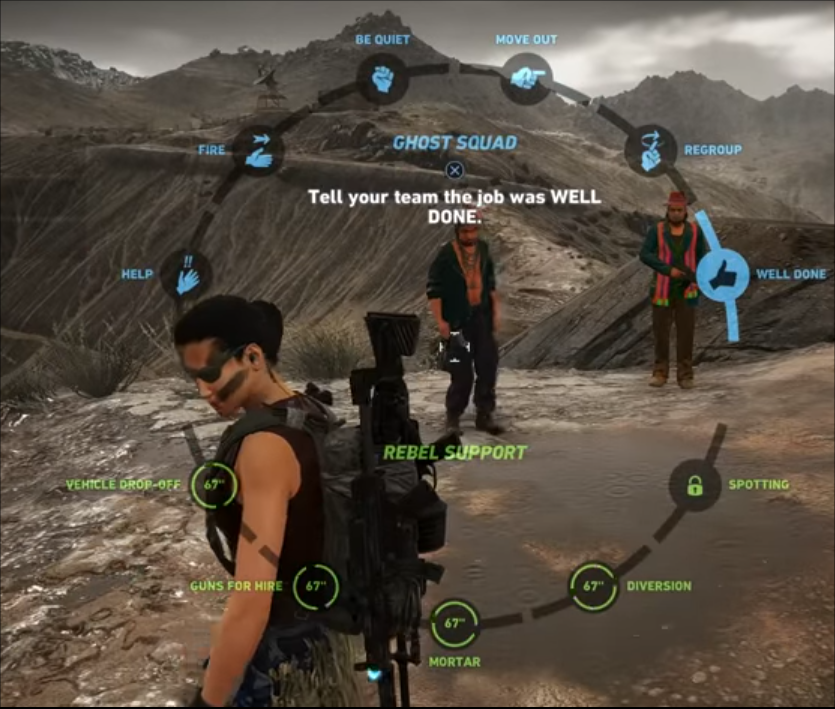 The rebel support is whatever… but I’m definitely excited that the cars/vehicles don’t just blow up with a little bit of traded gunfire. This means you can have some lengthy, cool, movie-style vehicular chase sequences and even exercise a bit of evasive driving maneuvers to avoid being completely blasted off the road.

I don’t know why cool chase sequences are such a rarity in video games despite having so many open-world titles, but Ghost Recon Wildlands is a huge breath of fresh air for taking a decidedly different approach to the matter.

I’m also assuming that they don’t let the cars blow up too quickly because if you get trapped out in the middle of nowhere you’re likely going to need some kind of transportation to get back to your target destination.

Ghost Recon Wildlands is due for release on March 7th, 2017 for the PS4, PC and Xbox One.