Flatout 4 Interview: Bringing A Dash Of Twisted Metal Back To Combat Racing

Flatout is making a comeback… or rather, it has made a comeback. Strategy First, with the help of Tiny Rebel Games, and in conjunction with BigBen Interactive, they’ve managed to revive the Flatout series and bring the action-racing title back to home consoles and PC. The new game sports 27 different cars that can be raced across 20 different tracks in three categories of races, along with multiple game modes.

I had an opportunity to get in some talk time with Susan and Lee Cummings from Tiny Rebel Games, who have been working closely with developers Kylotonn Games and publisher Strategy First in order to help polish up and get Flatout 4 up and out to the public. Kylotonn Games producer Alexandre Assir also joined in on the interview, offering insight into the development of the game.

It was explained that after Flatout 3 failed to win over critics and consumers alike, the series went dormant for a while. Strategy First held on to the license while searching out a developer who could take on the project. They eventually brought Kylotonn into the fold, a studio who began work on Flatout 4: Total Insanity a year and a half ago.

Susan explained that Strategy First isn’t known for dealing with action titles or hardcore racing games, but they’ve wanted to branch out and decided to try their hand at publishing another Flatout title. They also decided for the first time to dip their toes into the console waters. It was about reintroducing gamers to one of the hardcore, arcade racers from the yesteryears of gaming, while also attempting to grow the Strategy First brand.

For the new game it wasn’t just about reinventing the wheel, it was also about going back to the roots of the series.

“If you’re going to start again you sort of have to pay respect to what came before it.” Susan says “That was kind of our attitude toward Flatout. Okay let’s start by going back to what was really cool about those games and what did people really like about them, and how can we recapture some of that so that we can start fresh.”

Alexandre also chimed in to explain that those working on the game were big fans of Flatout 2 and they were designing the newest game to hearken back to the first two Flatout titles.

Kylotonn also decided to build the fourth game on top of their own in-house game engine, moving away from the established engine that Bugbear had previously used to build the first two games.

Of course, one of the key components of the original series was the damage models. They weren’t quite soft-body physics but Bugbear managed to accomplish something fairly close to that.

Alexandre and Susan also explain that the damage models for Flatout 4 will see vehicles losing parts throughout the race, as well as seeing various aspects of the vehicles getting dented and dinged up along the way. It’s not like Beam.NG, but they’re hoping to capture the attention of people who like to ram, crash and shunt cars at high speeds. 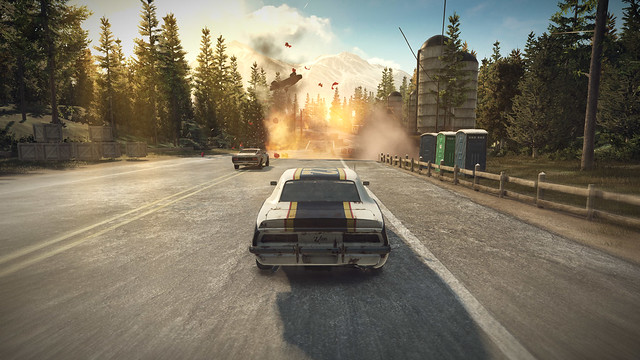 But in Flatout 4 it’s not just about ramming and attacking people by crashing into them. New to the series is the Assault Mode, a game mode where you can pickup power-ups and attack opponents using a variety of different weapons and gadgets to damage opponents. Many gamers have compared this mode to the 3D combat racing games from the 1990s, such as Twisted Metal or Vigilante 8.

In regards to Assault Mode… “We wanted to bring a new kind of gameplay to Flatout,” explained Alexandre, “And [since] we already had the campaign, we wanted to bring something new and interesting for the player to do.”

Susan complimented the comment by going a bit more in depth about what Assault Mode offers for Flatout 4 players, saying “It really feels like a natural fit, like something that should have always been there. For me another big part of Flatout that’s important is the physics of the stuff in the world – just the debris that’s constantly flying around – and what’s neat about Assault Mode is that it really shows that off when you have explosions going around and tires flying everywhere and stuff like that. You get that sort of frenzied environment that was part of Flatout.”

In addition to the Campaign Mode, the Assault Mode, and the destruction derby style Arena Mode, there’s also the Stunt Mode. The Stunt Mode, featuring the 12 mini-games where you tactically attempt to score points by ejecting the driver through the windshield in a variety of different tasks, they have six new mini-games and six returning modes from the previous Fallouts, including a golf mini-game, a baseball mini-game, a soccer-style mini-game, a stone-skipping mini-game, a rings of fire and a bowling mini-game to name but a few. They decided to remaster many of the older mini-games in order to bring them up to par for today’s generation of gaming.

“I have to say that […] at GDC Stunt Mode was absolutely the most popular mode for everyone who played it.” exclaimed Susan. “Everyone was laughing and having a blast playing it”.

Each of the modes are spread across three different racing campaigns: Derby, Classic and All-Stars.

The different campaigns feature different car classes that can be upgraded, modified and customized. According to Susan and Alexandre, the cars can be fully upgraded so that they can be used from start to finish in their respective disciplines, if you so choose.

Alexandre describes each of the racing disciplines, noting that the Derby is for the down-and-dirty jalopies that are good for the off-road races. The Classic cars are more street model production vehicles that you will race across dirt tracks and asphalt, and the All-Star class is all about tricked out, highly customized vehicles with special attributes.

They also confirm that Derby, Classic and All-Star can also be played online for up to 10 players in the multiplayer mode. The Stunt Mode won’t have th e online multiplayer mode but you can play it in local hotseat mode with a friend, just like in the older Flatout games.

Each of these modes are available on home consoles and will be available on PC. For those who didn’t follow the news, there was a lot of anger from the PC gaming crowd when they originally saw the announcement trailer from BigBen Interactive, which didn’t include the PC logo. I brought how angry some of the PC gamers were at the whole thing, and Susan laughed and exclaimed… “I know! People assumed that it wasn’t coming out on PC, saying ‘How the hell do you do Flatout and not put it on PC?’ Of course it’s coming out on PC!” 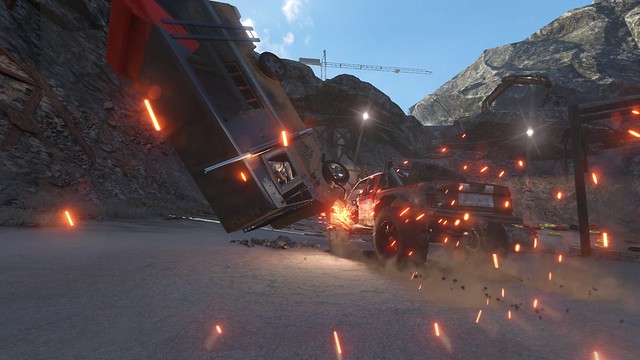 It was explained that since BigBen was handling the console version they only showed the console version in the trailer, but Susan was quick to rectify the problem by getting an e-mail out to Strategy First to let them know that they needed to assuage the community by announcing that the game was coming to PC as well. Eventually things panned out and the rage in the community subsided.

According to Alexandre, whether you play on PC or home console, they’ve designed Flatout 4: Total Insanity to have a low level of entry for driving skills, but as you progress through the campaigns and get good, the game’s difficulty is designed to scale up, requiring more finesse and driving precision, which is how it was in the first two Flatout games.

Now that the game has launched in Europe for PS4 and Xbox One, we’re starting to see some early impressions and reviews popping up for the game in Europe, but it won’t be long before we see reviews for the PC version as well.

You can pick up a digital or physical copy of Flatout 4: Total Insanity for Xbox One or PS4 in Europe, or you can wait and get the game on PC starting April 4th on PC. You can also expect to see a physical and digital release in North America starting in mid-April for the Xbox One and PS4.

And assuming everything goes over well with the Nintendo Switch and its sales, Susan mentioned that Strategy First would consider porting the game over to Nintendo’s console as well, saying “It’s certainly possible. It’s definitely something Strategy First have been watching with interest – the early success of the Switch. I wouldn’t say anything is out of the question.”

For more information on Flatout 4: Total Insanity be sure to visit the official website.