Many of the same websites that claimed #GamerGate was a harassment campaign back in 2014 (even though the FBI investigated and found no actionable evidence that it was a harassment campaign), are now claiming that an alleged former BioWare employee is being harassed for her work on Mass Effect: Andromeda. It turns out that some of the evidence they’re using to claim that harassment is taking place, actually includes non-harassing criticism from other women.

Mashable originally published an article on March 20th, 2017 entitled “The disgusting witch hunt over ‘Mass Effect’ game’s terrible animations”. They claimed that the following tweet from Twitter user Margaret, was harassment aimed at one of the employees of BioWare who allegedly did not work on the game’s animations but was associated with the development in some way.

@MargaretsBelly Maybe she got the job because she’s lovely to work with, because the work history is pretty weak.

This came after reports surfaced that the woman in question was allegedly in charge of working on the face animations for Mass Effect: Andromeda. Media websites like Mashable claimed that a harassment campaign was targeting the woman, and used tweets like the ones Margaret posted as proof of harassment.

Over on Kotaku in Action, some users pointed out that Margaret was none too pleased about the incident, and called out the Mashable writer – who previously worked for Kotaku – for having altered the headline and misrepresented the tweet in order to paint the criticism as harassment.

Hey @TinaAmini way to change the title on your piece & misrepresent my “I’m sure she’s a nice lady” tweet as HARASSAMENT. pic.twitter.com/iVsNa5F1hw

Your whole article is to focus on harassment… and you choose to highlight a benign comment by me, a disabled woman. https://t.co/2RBYjdBrP7

The Mashable writer in question responded saying that she didn’t intend for Margaret’s tweets to be construed as harassment.

@MargaretsBelly I didn’t say it was!

The exact wording in the modified article states…

“Screenshots from Allie Rose-Marie Leost’s social media and resume, which listed her as the lead facial animator at EA working on Mass Effect: Andromeda, was all it took for people to launch a hate campaign against her” 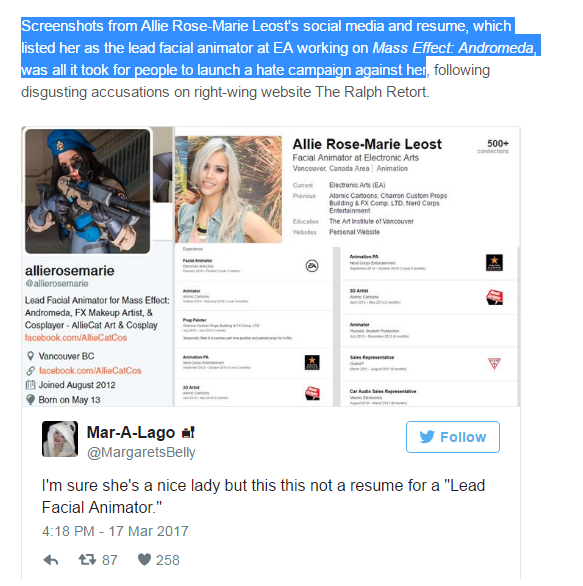 It’s not explicitly stated that the tweet represented harassment, it’s certainly implied, though.

Various individuals across the internet seeing articles about harassment have instantly jumped to the belief that this is some sort of campaign of misogyny. In reality, if you read the tweets cherry picked in all of the articles, a lot of it is actual criticism. However, criticism is being misconstrued as harassment, like the one below.

>literally no exp
>from a nobody to lead animator
>years in production
>results: unnatural, inhuman, frigid, horrifying@allierosemarie https://t.co/t4qJHM51Vn

Some of the tweets are harsh with the criticism, though. And obviously given the scope of the issue and the fanbase of Mass Effect, there are a lot of people (male and female) expressing disappointment with the issues about the game. One thing the media has completely ignored is all of the harsh criticisms and anguish expressed by the fans toward former BioWare developer Manveer Heir for his blatant racism that was directed at a large demographic of the Mass Effect: Andromeda fanbase.

Nevertheless, Kotaku in Action features a list of articles claiming that a harassment campaign is underway against the allegedly former BioWare staff.

However, mislabeling constructive criticism as harassment surely underplays and undercuts the importance of real cyber-bullying and cyber-harassment.