BioWare general manager Aaryn Flynn responded to a comment on Twitter about Heir’s employment at BioWare, stating the following…

@Synthovine @manveerheir No, but Manveer is no longer with BioWare (see his Twitter bio)

If you check Manveer Heir’s Twitter profile you can see that he does indeed mention that he “previously” worked on Mass Effect: Andromeda.

The significance of this news is that a lot of gamers had mentioned that they wouldn’t be purchasing Mass Effect: Andromeda due to Manveer’s tweets, as he made it blatantly known that he did not like white people. His Twitter feed is filled with many crude, insensitive and racist remarks about Caucasians.

Heir’s persistently racist tweets ended up spawning a petition, with some gamers asking for BioWare to fire him for racism.

Things continually escalated as the release of Mass Effect: Andromeda drew near, with the 10-hour free trial and the revelation of the game’s poor quality and the fact that fair-skinned whites couldn’t made in the character creator also made people quite angry. The lead game designer, Ian Soon Frazier, commented on Twitter that they would investigate possibly patching in the ability to make fair-skinned whites and light-skinned Asians in Mass Effect: Andromeda, leading many people to believe that Manveer Heir may have had something to do with it.

At the same time, there were also reports that BioWare may have been filling their ranks with “diversity hires”, which is why the quality of the animation, character models and facial rigging was so low compared to previous games, as revealed by Nick Monroe on Twitter. 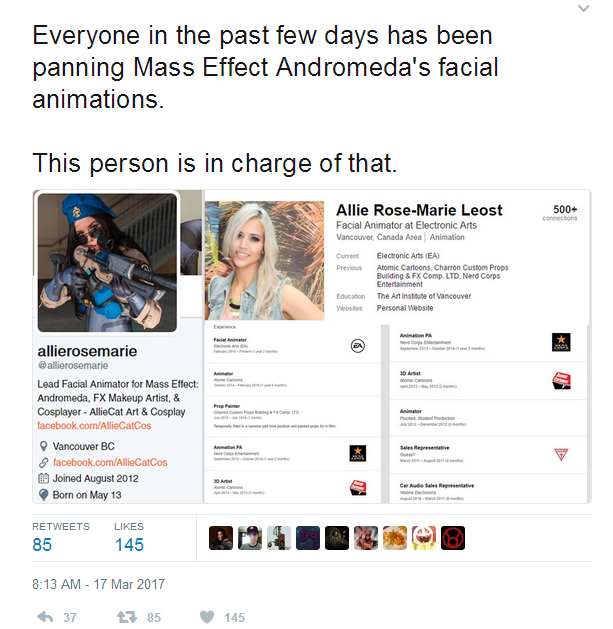 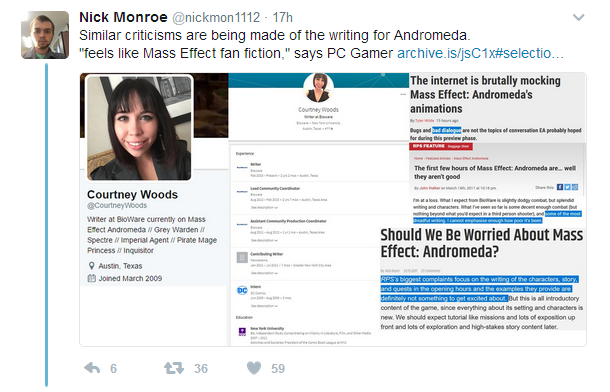 This spawned additional reports from some other websites, as well as enthusiast games media, attacking gamers for allegedly attacking the developers at BioWare via social media. According to the Twitter search and archive of Allie Rose Marie’s profile, the claims of mass harassment don’t appear to be present.

This back and forth vitriol came about after BioWare’s Aaryn Flynn released a statement on Twitter, stating…

“Recently, a former EA employee was misidentified as a lead member of the Mass Effect: Andromeda development team. These reports are false.

“We respect the opinions of our players and community, and welcome feedback on our games. But attacking individuals, regardless of their involvement in the project, is never acceptable.”

Some people questioned if this was in relation to Manveer Heir, Courtney Woods, or Allie Rose Marie. BioWare didn’t clarify, but some websites jumped to the conclusion that it was about Allie Rose Marie, one of the individuals who claimed on her Twitter profile that she was the lead facial animator for Mass Effect: Andromeda.

Regardless, it appears many of the people responsible for the game (the good and the bad) were only working on a contractual basis and are no longer on the BioWare team.

Mass Effect: Andromeda releases on March 21st for the Xbox One, PS4 and PC.