NetherRealm Studios released a new trailer for Injustice 2, this time unveiling the return of The Joker.

The trailer clocks in at just under two minutes, giving us a glimpse at a reimagined clown prince of crime.

The design seems to a mixture of different interpretations of the Joker. He has the coat from Suicide Squad, the disheveled hair like Heath Ledger’s Joker, but a manic, wild design all his own. He actually looks pretty cool. You can check him out in the trailer below.

Some people are a bit torn on his look. Some like the anarchistic design obviously inspired by Jared Leto’s portrayal, while others are a bit reserved on NetherRealm using the influence. In the case of Harley, NetherRealm based a large part of her design on Margot Robbie’s portrayal of the character and the Batman: Arkham games. Most people really like the influences that helped make up Harley’s look and appearance in Injustice 2.

For the Joker… I think the fact that they went close to the edge but didn’t quite step over the line into full Jared-Leto-Joker is what saved this design. The tattoos and piercings would have been a bit too much.

As for his fighting moves… Joker has a lot of gag moves and unorthodox combos. Fighting wise, his moves really do match what you would expect from The Joker. 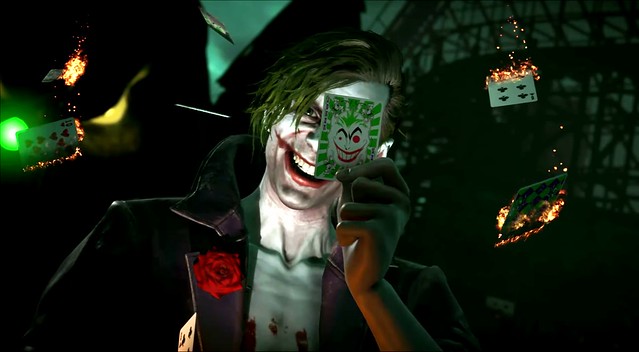 His super special is also one for the ages. It was about one notch below heading into ‘M’ rated territory. That nod to Jason Todd’s death is something real special.

I am curious how they’re going to fit the Joker into the story of Injustice 2 given that in that Earth the Joker died to Superman. So either it’ll be another Joker from a different universe or maybe he’ll be used in flashback sequences? Not sure but we’ll find out when the game launches on May 16th for the Xbox One and PS4.

A lot of people are also excited to see what gear and skin options will be available for the Joker, because quite naturally there are people who want to recreate Heath Ledger’s Joker.