Phew. Tank Warfare: Tunisia 1943 is quite a complex game, so let’s start with some of the simple stuff. Broadly speaking, I love tanks and games that relate to tank warfare, because if nothing else, tanks are just such fun toys to play with in a virtual setting. Tunisia is primarily a tactical RTS, but the pace of each battle is slow and strategic, with infantry, armor and artillery units spread very broadly across each huge map. I’d say that the gameplay is even slower than that of the Total War series. For example, in Tunisia, you can never expect an infantry or artillery unit to charge across the battlefield to reinforce a weaker flank.

This level of realism (for lack of a better word) in Tunisia is fairly unusual in mainstream games, but Graviteam has some history here, having previously released the rather good Graviteam Tactics: Mius Front among other, less well known titles. As a result,  the game feels quite good to me, even as someone who would not usually dabble with such a detailed and complicated tactical combat simulator. That’s not to say that it isn’t complex if that’s what you want, just that I managed to get by with a layman’s understanding of some of the more detailed features.

Tunisia is a single player only experience, which is kind of a shame, but even so the AI competition is tough. There are three main campaigns, a couple of quick battles and a handful of tutorial levels which can be quite challenging in themselves. On that note, the tutorials are a bit lacking in a game of this complexity, and after the first couple, the layers and layers of detail and information were beginning to get quite lost on me. There is a PDF manual that I would recommend you print and keep close to hand, should you plan to go deep with Tunisia over a long period of time.

Despite these slight limitations in understanding during the opening hours of play, I did find the game easy enough to pick up at a basic level. Combat controls are not hugely dissimilar to those of other, similar games, with only really the control wheel that determines how a unit moves being a deviation from the norm.

In Tunisia, units can approach locations in various ways, including via roads only, directly across any terrain, in an assault formation or in a kind of normal state of awareness but with a view to attacking the enemy should they come across them. The wheel system is simple enough to use, but understanding the nuances of each kind of movement were something that I needed to refer to the manual for.

When it comes to graphics and terrain, I found Tunisia to be incredibly satisfying for the most part, with only a few minor issues. Panning and zooming around the detailed map is as smooth and as simple as you might expect, and the attention to detail given to units – from the tracks on each tank to the rifle of each infantryman – is high. If you don’t take some satisfaction from following your tanks into action using the locked-on chase camera, then you’re playing the wrong game in my opinion! When you do zoom in on a unit, the locational sound works very well too, enabling good aural awareness across the battlefield.

Overall, maps are detailed enough to be acceptable, but despite the desert setting, I found them a bit flat overall, with gullies and other minor terrain nuances being quite hard to spot. I also spotted some pine trees on one map, which I imagine were uncommon in North Africa during the 1940’s, but I could be wrong about that.

The GUI is really important in games like this, and one thing I will say about Tunisia is that it really does provide players with a good insight into what is happening at all times, which is good considering that battles can include tens and tens of individual units. The left side of the screen features a ton of icons from top to bottom that detail the current unit status, whilst on the right there is a ticker indicating the high level status of other units on both sides – for example by showing hits, kills, damage and so on. The icons in the middle of the screen (top and bottom) control aspects of the camera and overall battle control (such as pause, or fast forward time) and the currently selected unit respectively. There are lots of options to fine tune unit behavior, but almost all require some reference to the manual, with only the basics covered in tutorials. 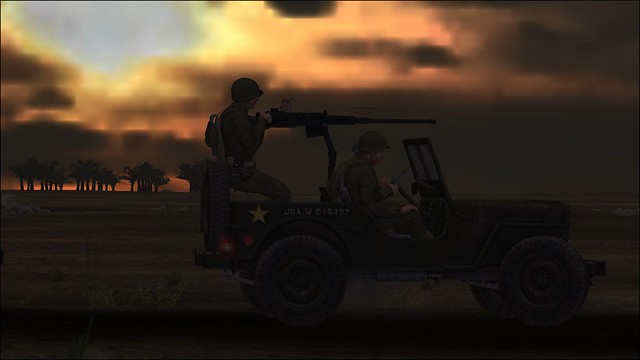 So far, I’ve largely described the real time strategy component of the game that focuses on individual battles, from small skirmishes to large actions with lots of mixed units. There is also an operational mode that brings the action up to a strategic level, allowing players to direct forces en-masse using a square grid and a turn based system. When two opposing groups of units meet on this map, the player has the option to either fight the battle themselves, or to allow the AI to resolve the battle. The campaigns operate at this level and provide players with the opportunity to feint in some sectors, to reinforce where they lose ground and to generally manage tank warfare on a much grander scale, which I did enjoy.

The game does feature an editor that I dabbled with for the purpose of this review, and I suspect that there will be a community of players that create some superb campaigns that move players out of Africa and into other theatres of war. I found the editor to be fairly easy to use, with perhaps the main benefit being that it allows players to simply place units where they want, and to affect parameters within the scenario that they have created.

I feel like Tunisia has a lot to offer the discerning fan of tactical strategy games, or for anyone who has a penchant for tank warfare (and really any deep WWII warfare, since the game also features infantry, artillery and various other vehicles.) It is complex and a little unforgiving, so I don’t think Tunisia will appeal to people seeking a strategy-lite game that has been optimized for action-focused, mainstream audiences. A satisfying, well made and detailed game that looks and sounds good, but won’t appeal to everyone.