Following up on last year’s massive Counter-Strike: Global Offensive gambling ring bust, which managed to gain the attention of various gambling commissions, lawyers, and even Valve, there appears to be a new gambling-style scam involving opening up cases in Counter-Strike: Global Offensive. They’re known as case opening sites, and one of the coders who has worked on multiple sites claims that most of the ones he’s worked on are pureposefully rigged against the average user.

It’s not just that they’re rigged, it’s also that they’re designed to be deceptive by making claims that aren’t true. In an interview with Richard Lewis over on Rlewisreports.com, there’s an extensive look inside the way the backend of the case opening sites operate, complete with screenshots of the item hashes and the roll chances that users face off against in an attempt to win goods from these case opening sites.

Going by the pseudonym David, the coder explained to Lewis…

“[Rape mode] Yeah… That was when I decided to stop working because it’s like ‘what the fuck are you even talking about?’ He literally called this setting ‘rape mode’ and he could turn it on and off. When it was on you could only land the cheapest two skins from any case. Always.”

Images of the weight of winning percentages was shared, along with images of the averages and frequencies of certain other weapons being available in the cases. 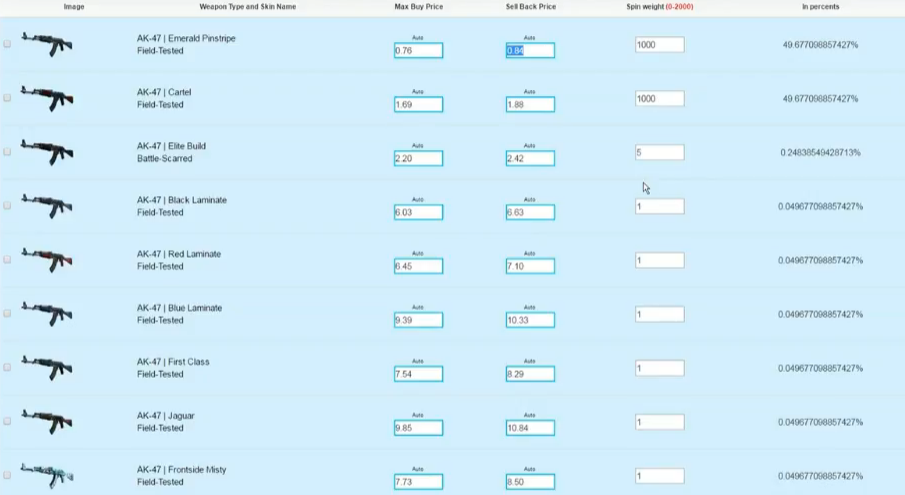 According to David, he claims all of the case opening sites are copied and pasted after one another and are basically the same. The only way to know for sure is to check each of the sites, but the top advertised sites on Google are practically identical in design. 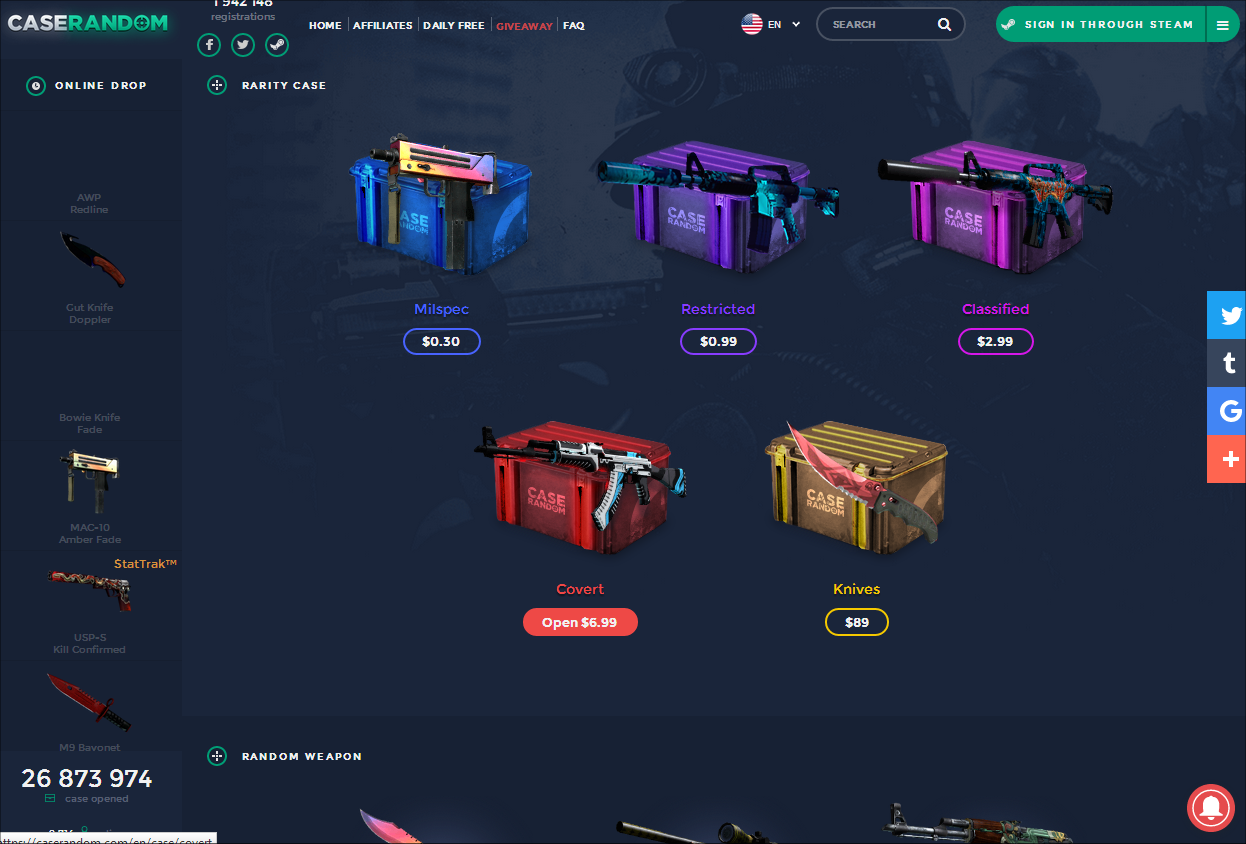 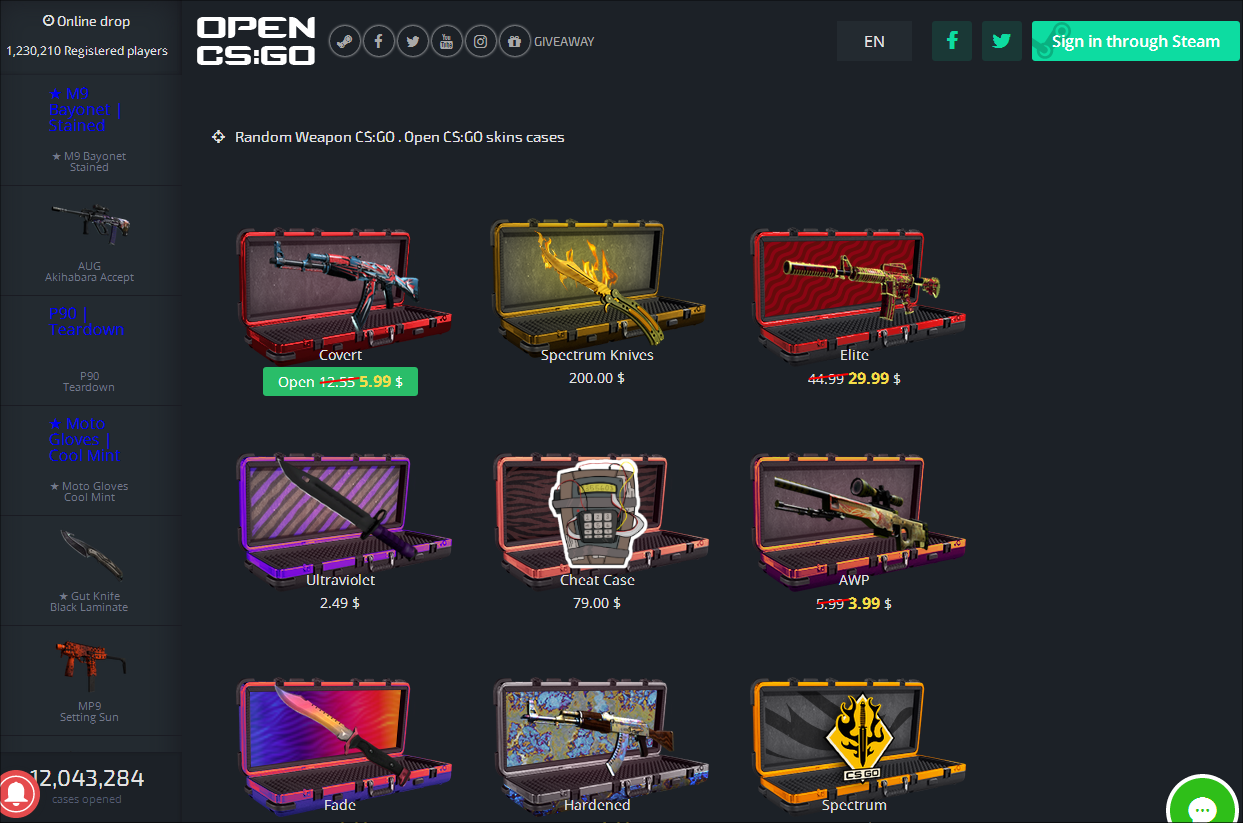 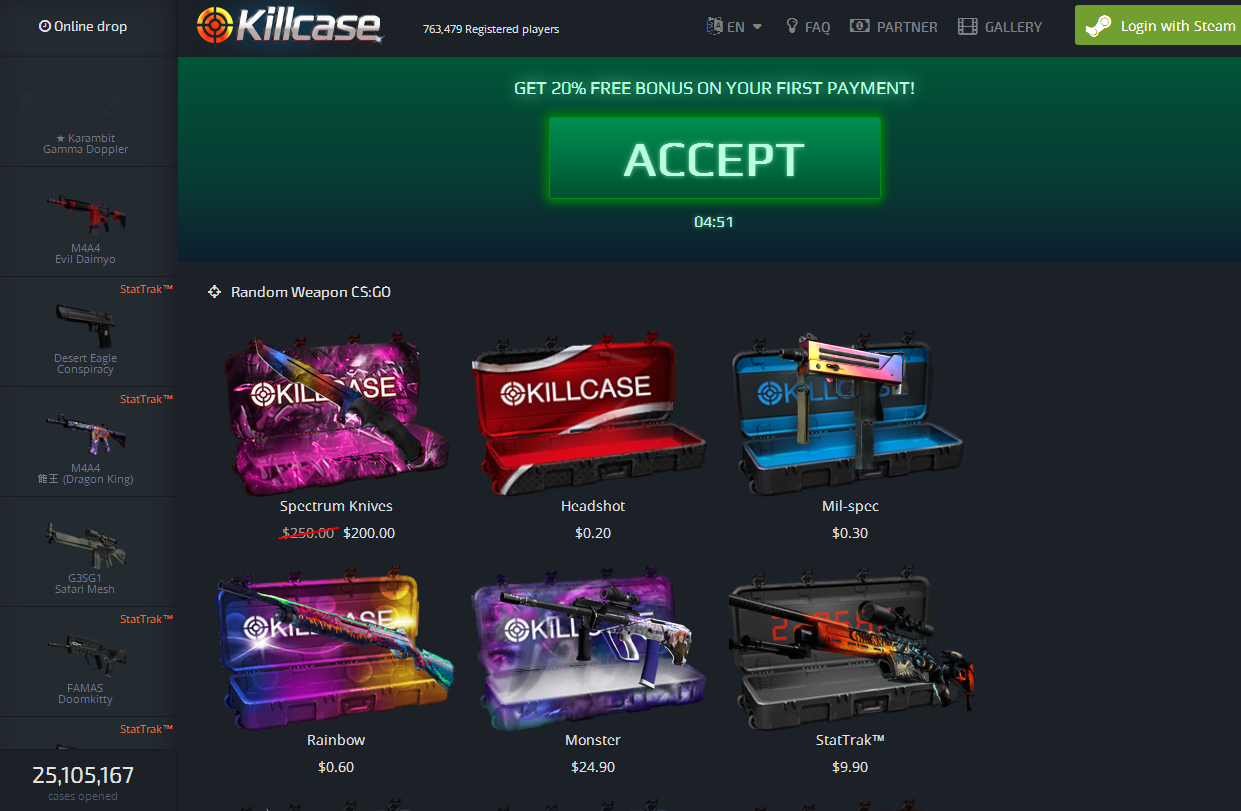 Those are five completely different websites, but each of them have nearly indistinguishable designs.

Each of the sites offer the ability to randomly open cases on the site, but there’s no real indication on what the percentage of the rate of winning the item you want is. The items advertised on the site, as indicated by David, may or may not end up in your inventory when attempting to open the case. If you check the FAQ page on a site like Hellcase.com, you won’t find anything about rate percentages regarding items.

Both Valve and Blizzard, along with other companies wishing to do business in China, had to change how case drops and loot boxes were displayed to the general public. They were forced to give users a rough percentage rate of the loot they might attain from the cash shop boxes. This was part of a new law that China implemented to curb unfair gambling practices from various sites and operations attempting to rig the game, as reported by PCGamesN.

According to David, he mentions that the sites are all setup to be rigged, so even if they did display the winning chance on the frontend, it would be moot since most of the values of the case opening sites are set so that the house always wins…

“On the front of the site it says you can win a knife, or an expensive item… Meanwhile the site has it set to zero so you literally can’t. Every site I’ve worked on does it this way and requests these features.”

Much like with the skin gambling sites, there are also various YouTubers involved with these case opening sites. Last year when the gambling scandal broke, there were large YouTubers like TMartn and PsiSyndicate involved with the gambling sites, or they actually turned out to be the owners of the sites. It was also revealed that skin betting sites were rigged so that the YouTubers could earn some high profile skins to lure in users, some of whom were underage kids. Speaking of which, none of the sites pictured above seem to have any disclaimers about age restrictions or standards in order to use the sites, even though they require the use of real money from Steam wallets in order to open the cases.

David mentions that other YouTubers are jumping in using the partnership programs to make bank on the rigged case opening system, which allows YouTubers and streamers to win big items during live-streams or YouTube videos in order to increase referrals and make some extra money on the side.

“When a Youtuber or some other personality signs up to promote the site, they make a note of their email address linked to their account and assign two special settings to it. The first is the number of times they win out of every ten openings. The second is a total value of skins they can win in this manner, up to any limit.[…]”

“[…] For heavy users, people who would stream for hours at a time just spinning, there is even a setting to incrementally increase the total soak value every ten spins to ensure they keep winning premium items over long settings.”

“If they know what time the person is streaming or making the video they can just hit the button and have them win big. If they’re not that smart they just raise the weights of big wins site wide for the duration of the streamer making the promotional video and this is probably why so many people who use these sites complain about them claiming to have ‘lost’ their inventory when they go to cash out”

David also claims that many of the sites he worked on also teamed with G2A in order to take advantage of fast payouts. If you check the bottom page for each of the sites they list using G2A Pay as the cash-out service.

“G2A Pay is one of these essential components” […] “because they deal directly in skins, which is something no other financial service does… Not banks, not Paypal, none of the companies like Paypal. They offer a unique service when it comes to offloading skins quickly for money.”

Unfortunately David doesn’t name and shame the websites he did coding for, but says that if anything happened with G2A Pay or if Valve stepped in and made it where these case opening sites can no longer use the Steam API then they would shut down.