Peer pressure can be tough to overcome. We all remember it, right? School mates encouraging us to smoke behind the bike shed or to pinch a box of Mr. Kiplings Apple Pies whilst the shopkeeper is distracted. Reviewing games like Dawn of War 3 is a bit like that. Marketing tells me I should rate it highly. Seasoned geeks assure me that it is exceptional beyond all reason. Thankfully, the internet has already spoken – and I agree.

Dawn of War 3 is good. Decent. Above average. It is a highly accomplished real time strategy game that looks bloody fantastic and does everything that you would expect from a game with this kind of heritage and this kind of budget. Not only does it look good, it plays well too – the user interface is laid out to perfection (once you get past the reintroduction of arrow keys for camera control and A-S and D as other hot keys) – and the heads up display contains exactly the information you need, but nothing more. 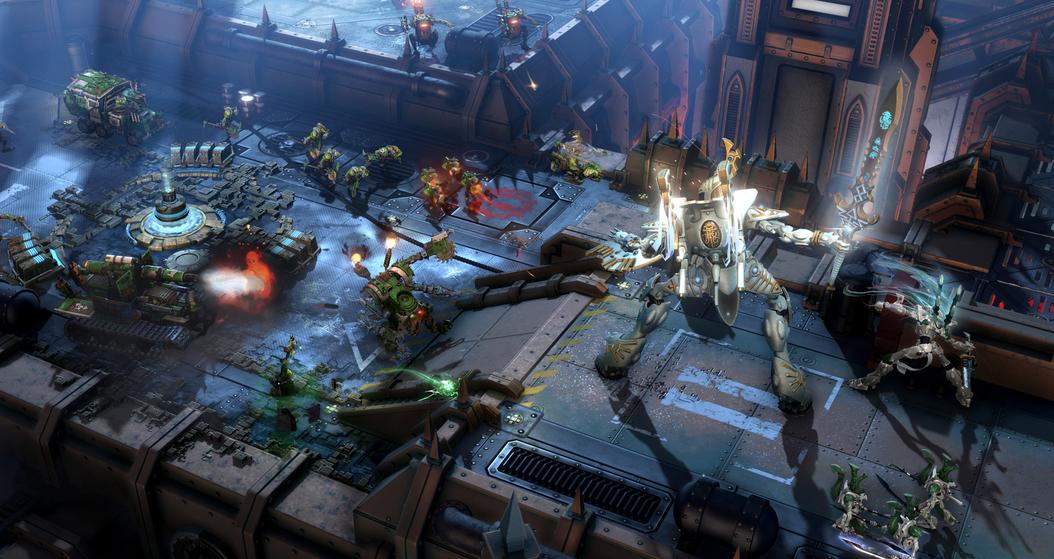 Controversially though, Command and Conquer had all that in 1995 – even use of the arrow keys. Come with me on a journey here – a journey into the past. In EA’s classic RTS, the special weapon of the Global Defence Initiative (the GDI) was an orbital cannon that obliterated enemies from space. In Dawn of War 3, there’s a very similar weapon that can put even the best laid enemy plan to bed in a single key stroke. There are also Elite units in Dawn of War 3, a feature that is equally common in the genre, dating back to 1996’s Command and Conquer: Red Alert. You can see where I’m going here, right?

It’s true. There is nothing new under the sun, and certainly, there is nothing new about Dawn of War 3,. What it does do though, it does well. I’ve always liked RTS games that invested in their story, and Dawn of War 3 does so with the full Warhammer 40,000 license behind it. Gigantic, frowning men debate about the righteousness of their cause, attractive alien ladies observe battlefields sombrely whilst wearing boob armour, and comical orks vie for control by punching each other and, umm, eating their friends. Or something like that. Everyone is looking for a mythical doodad that will either grant unlimited power/allow unprecedented research or become the ultimate wall-mounted trinket. You know how this goes, we’ve all been here before.

I’m now five paragraphs in and I haven’t said anything nice. You’ve probably switched off, or moved on to a more complimentary and informative review that tells you all about the features and benefits of Dawn of War 3 in elaborate ways, but I’ll be honest, I can’t be arsed with all that. 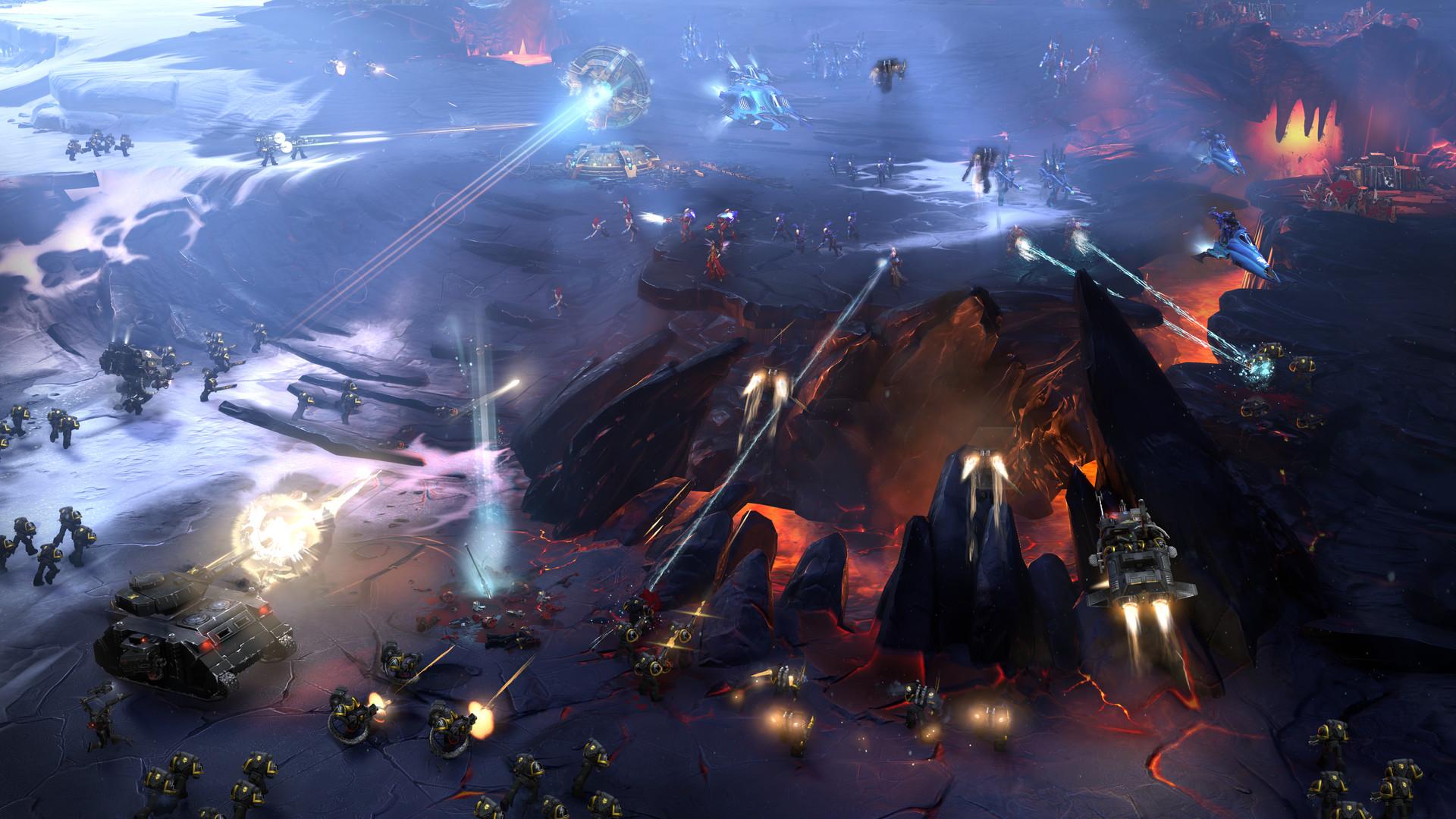 Dawn of War 3 is a very competent real time strategy game, and it clearly endeavours to replicate the best of not only both its predecessors, but of every similar, popular game that came before it. The campaign mode provides players with access to the Space Marines, the Orcs and the Eldar, and instead of providing a separate campaign for each, the combatants share one, with the player jumping from one side to another as the story progresses.

Once in battle, I’d be stretching myself to say that there is anything unusually exciting going on, but at the very least, the three races are as varied as they are in any other game, including StarCraft, for example. The Space Marines are the “simple” option, with weapons and tactics that are intended to be familiar, whilst the orcs occupy the “oddball” slot, with their ability to increase their strength through the accumulation of scrap metal. The Eldar are the “expert” choice, with fragile but powerful units that require a lot of micromanagement, and structures that can teleport around the battlefield.

Dawn of War 3 does get the missions right, and here, there is lots of variety. Whilst I don’t like the fact that there is just one campaign, I did enjoy the variety of switching from one race to another throughout, and the way the game introduces new units, buildings and skills is handled well. The Warhammer 40,000 license, and the uniqueness of each race only adds to the fun, and whether you’re doing something daft like blasting a gigantic scrap gun across a fortress , or fighting a desperate last stand, it’s all very interesting.

In Dawn of War 2, Relic took the decision to withdraw the basebuilding mechanic that is so common among games of this kind for the fashionable (at the time) squad-based approach. Thankfully, Dawn of War 3 reverts this decision, and the game is better as a result. I loved the first Dawn of War, and almost ten years on, Dawn of War 3 delivers the same, polished experience, albeit with a considerable lick of paint. 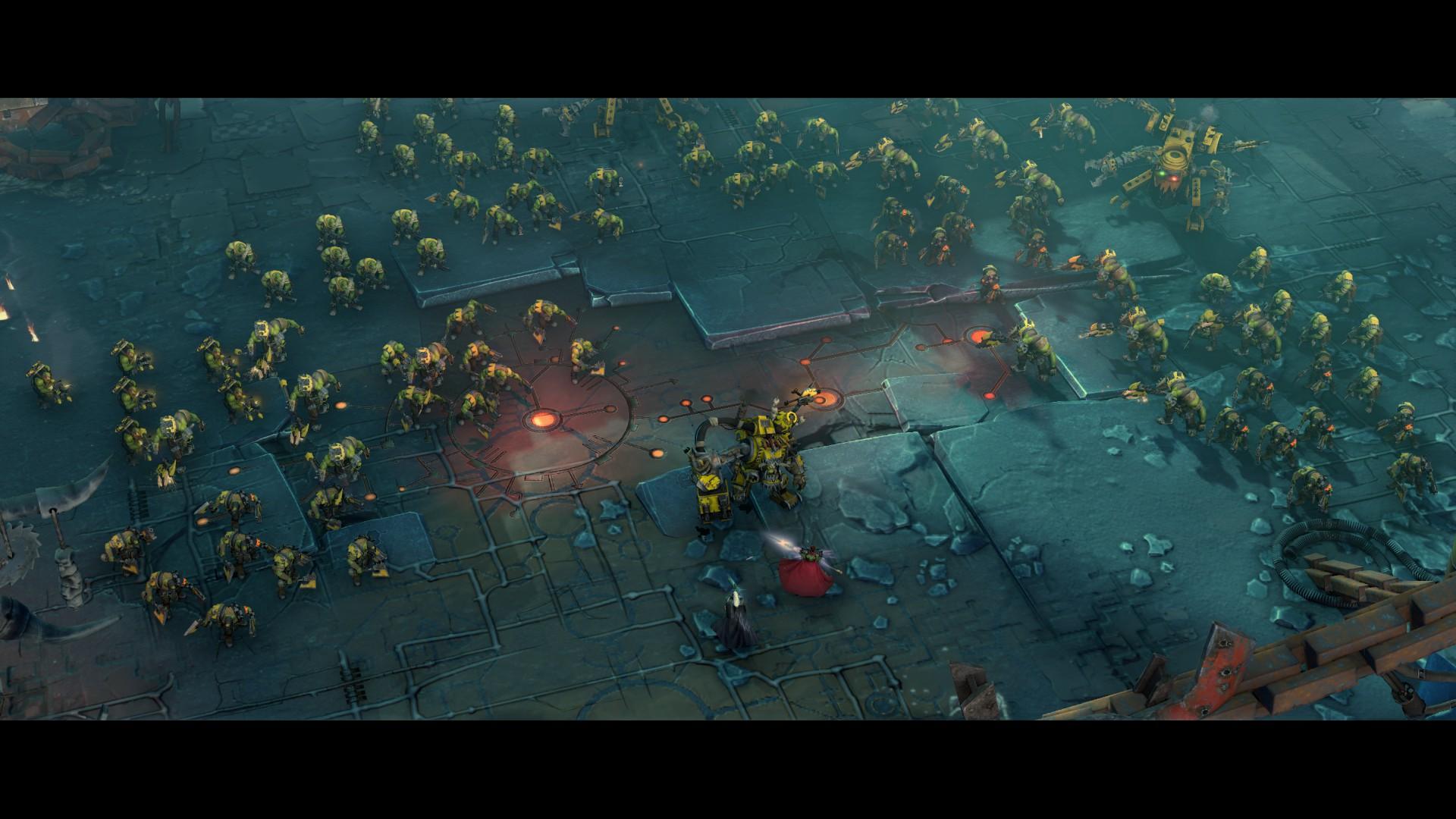 Of course, the campaign is all just preparation and window dressing for the competitive multiplayer mode that will be the long-standing, central focus. Strangely, there is only one mode (effectively annihilation, with up to three players on each side, for a maximum of six) in the game, and a small number of maps, admittedly, with a broad range of features.

I’ve read lots and lots about MOBA influences in the multiplayer mode, what with the Elite units and the fact that turrets can only be built on top of resource points, but in all honesty I don’t see it. Dawn of War 3 doesn’t do anything that another RTS didn’t do, long before the MOBA genre was even a twinkle in someone’s eye.

That doesn’t matter anyway, because the solid fundamentals of Dawn of War 3 make it an excellent prospect for long term online play. The graphics are bang up to date, even though the game runs as smoothly as silk. The GUI and HUD (as I said earlier) provide rapid access to key information, and almost every feature is automatically keybound, so advanced players need not click around their different units and information panels to get the job done. As you would expect, combat tends to focus initially on central resource points, but beyond that there is genuine opportunity for tactical play, either by using the maps to flank, or through the rich and flavoursome range of available units.

In conclusion, one mustn’t get too distracted by just how similar Dawn of War 3 is to basically every other RTS game you’ve ever played. Firstly, it looks exceptional and it has a campaign that is much better than average. It’s also better executed than the majority of its peers, so you can be assured that if you want the pure joy of finely balanced RTS pleasure, than you can only really do worse. Sure, the Warhammer 40k universe is much more far fetched than say, a World War II setting, but at the same time games that are this polished are quite rare, whatever the lore that surrounds them. Unless you are absolutely dead against real time strategy, or you crave something that breaks tradition, you should: