After initially unveiling Beyond Good and Evil 2 at E3 this year, Ubisoft’s Michel Ancel decided to showcases some of the progress that they’ve made on the game and what some of the gameplay is like running on the Voyager game engine.

The 14 minute demo that Ancel walks gamers through is extremely impressive from a technical standpoint.

One of the things that they’re focusing on with the Voyager engine is that it’s based a lot on scale. There are a lot of large objects, large planets, and large ships. You can check out the video below that PS360HD posted up from the Ubisoft live-stream.

Ancel explains that they have a variety of different ships, and the larger ships can hold smaller ships. They consider this to be the “Russian Doll” effect, where players who continue to purchase larger and larger ships can store them in the big freighters. You can also enter into the ships and walk around inside of them. It’s interesting because Cloud Imperium Games has a similar design in the works for the ships in Star Citizen.

Additionally, Ancel reveals that players can create their own character, whether it be a human or a hybrid. This likely means that the story will sort of oscillate around your character rather than include your character in the actual drama and plot points that unfold.

After you create your character you’re thrown into the game world where you’ll have nothing but the clothes on your back and a tuktuk. The starting points of the game will require you to make some dosh and level up your character; Ancel compares it to the starting segments of the original Beyond Good and Evil. 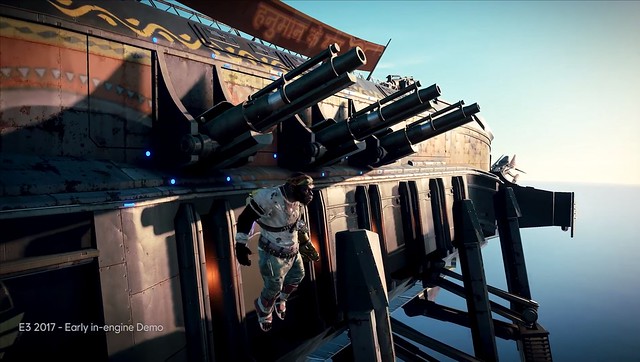 As you take on missions and complete side-quests, you’ll eventually be able to stockpile some credits and buy a new vehicle, upgrade your current vehicle, or set your sights on a ship that will allow you to partake in interstellar travel.

Some missions may require you to take photos of certain things, or alternatively you can simply take photos just because you want to. Ubisoft is also making it where there will be a photo sharing mechanic so you can share your snapshots with other players.

Once you’re able to unlock a ship that will allow you to venture the galaxy, the far reaches of space are the limit. One interesting thing about it is that the Voyager engine allowed the lighting artists to take a break. Instead of using artists to create spatial light from the ground up to the far edges of the stratosphere, Ancel and the crew at Ubisoft have used a physically based macroscopic light renderer based on time laps, so that there’s organic global illumination based on the time and position of the planet.

Let me just say that such a feat in software engineering is purely remarkable. 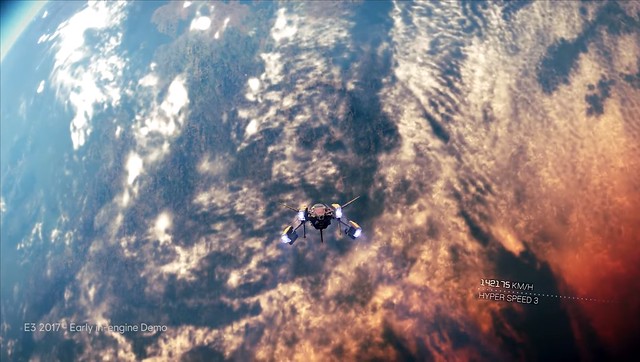 Not only that but each planet will have its own series of biomes to explore, from deserted deserts to bustling cities off the coast; from snowy mountain caps to deep valleys off the mountain range. There are a vast array of different regions and areas within those regions to explore on each planet.

Additionally, some planets will be susceptible to atmospheric hazards, such as asteroid attacks. Not only that but the asteroids can supposedly affect the geometrical properties of the planet. Ancel demonstrated the planet’s surface altering where he was able to create a smaller or larger crater where an asteroid would hit.

Another thing he mentioned was that beyond exploring, traveling and questing, there will also be dogfighting. He briefly demonstrates the smaller ship flying fast, performing evasive maneuvers and reaching extreme speeds while heading into space. So it appears as if there’s going to be a little bit of something for everyone.

The one thing that stood out most to me was the exotic tapestry of instruments and sounds you could briefly hear in the background during the demonstration. Hopefully it’s reflective of the game’s final soundtrack when it eventually launches at some point in the semi-distant future.