Rockstar and Take-Two probably just filed a death sentence for their games on PC. After sending a cease and desist letter to the Russian developers who made the OpenIV tool, effectively killing the modding scene for GTA V, gamers decided to fight back the best way they knew how: down-rating the game.

Out of the 227,054 user reviews on the Steam database, 37,506 of the more recent ones have been changed to negative, all in protest of Take-Two’s efforts to completely kill off the modding scene for GTA V. 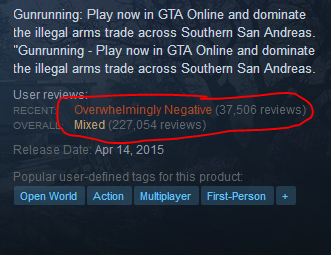 The user reviews are now short and sweet, filled with expletives and ire directed toward Take-Two Interactive and Rockstar for allowing Grand Theft Auto V’s modding scene to essentially come to a close. 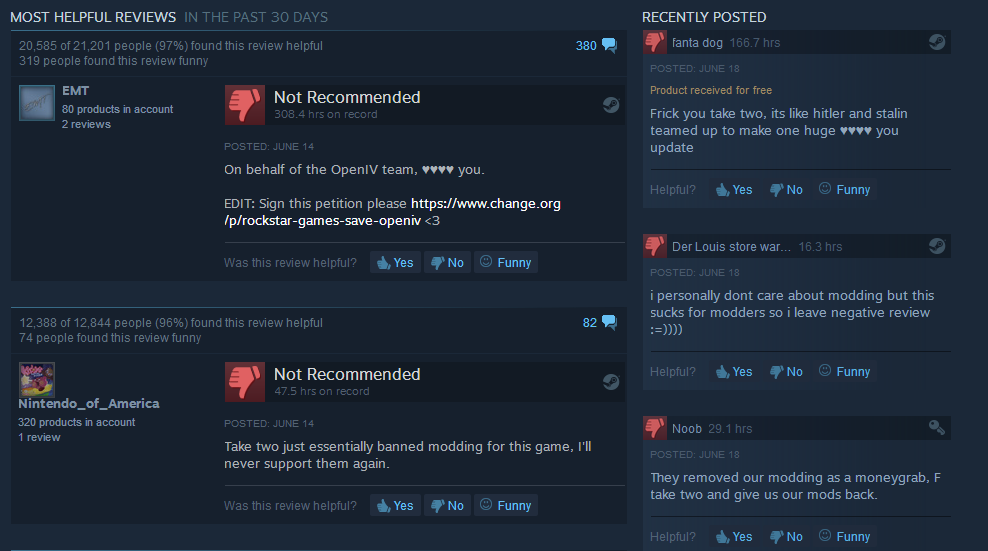 Gamers are organizing on the forums and working towards bringing the overall rating for Grand Theft Auto V on Steam down to “Overwhelmingly Negative”. For now they’ve managed to bring the game’s rating down from “Overwhelmingly Positive” to “Mixed”.

There are some pro-corporate detractors attempting to dissuade PC gamers from fighting for the right to use mods in GTA V, making arguments that mods are against the EULA and that it’s Take-Two’s game and they have every right to make modding illegal in GTA V. However, many of those arguments are moot when you consider that Rockstar openly made public statements claiming that they supported mods.

In fact, Rockstar made an actual newswire post acknowledging the PC modding community and fondly giving props to some mod creators…

“We have always appreciated the creative efforts of the PC modding community and we still fondly remember the awesome zombie invasion mod and original GTA map mod for GTAIV PC among many other classics. To be clear, the modding policy in our license has not changed and is the same as for GTAIV. “

Rockstar recently tried to change their tune, claiming that OpenIV made it possible for hackers and cheaters to “harass” GTA Online players. This is actually patently false given that OpenIV restricts online use, and can only mod the single-player portion of GTA V.

Steam user Wilbur Cobb made a post explaining how even if OpenIV is shutdown, hacks will still exist given that they don’t use, rely on, or require OpenIV to hack and cheat in GTA Online…

“When hacking first started, they used a modified hook that didn’t close the game when going online. This wasn’t done by the original creator of the hook, it was done by programmers that did HEX edits or made their own version. .ASI hacker menus were starting to be made for Online.

“This got stopped when Rockstar put their foot down, and started to increase their security methods. This didn’t help much since the bypasses were easy, and still work till this day to some degree! .ASI type menus and hooks went obsolete though since Rockstar started to ban anyone who used a hook, and to this day, still happens.

“Hackers went a more premitive and general route to hacking, their menus werent .ASI files anymore. The menus became memory modifiers, like cheat engine, and are still used till this day.”

This isn’t fan-theory or empty postulating. You can go onto YouTube right now and see the latest cheat engines in play, even running on GTA Online’s latest Gunrunning update.

SubVersion 2.1.1 allows users to cheat while playing GTA Online, even with the latest update. So this means that banning the use of OpenIV and making modding practically illegal for GTA V, even for single-player content, has had zero effect on actual hackers and cheaters, and they will continue to grief and disrupt GTA Online, indefinitely.

A petition on Change.org is also currently taking signatures, where more than 44,000 people have signed in order to help “Save OpenIV”. So far Rockstar and Take-Two have made no announcements about the actual future of the GTA V modding community outside of claiming that they were investigating ways to work with the modding community.