If you were hoping to be able to pay to get an advantage over your opponents in DICE’s upcoming Star Wars: Battlefront 2, you’re in luck because the new microtransaction Crate system will afford you the perfect opportunity to increase your opportunities to outperform your opponents by paying to unlock higher tier equipment, character classes and even buffs and bonuses that will give you an edge on the battlefield.

It requires credits to purchase Crates, so the more you play the more you earn, and the more opportunities you have to upgrade your deck with high-quality abilities, weapons, and character classes.

In one example we see an uncommon Star Card for Boba Fett that increases his rate of fire by 40%, allowing him to rapidly fire his rockets at an increased speed.

This will surely help take down groups of opponents or snipers entrenched in hard-to-reach places. Simply buy a Crate and hope to unlock the Intense Barrage and your Boba Fett will be able to take down any foe with little skill at hand.

He mentions in the video that the Star Cards for the characters was cranked up for that build and that epic and very rare Star Cards that give characters immense boosts will be rare or hard to come by, such as the Epic Saber Defense card for Dath Maul that reduces his damage received during his spin attack by 60%, thus allowing him to tank shots like a beast. 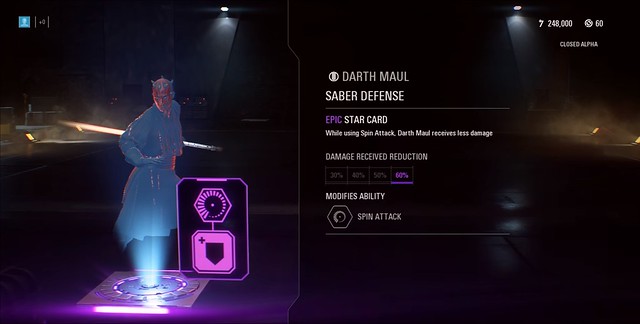 According to the video, there are Common, Uncommon, Rare, Epic and Legendary cards. The crazy part about the Legendary cards is that they have special bonus bonus stats, as indicated in the Legendary Star Card for the Clone Heavy Sentry, who received a 5% general damage reduction bonus and with an additional time buff for its activation.

So if you pay enough money, you can effectively tank more shots, deal more damage, and run roughshod over your opponents with some bonus boosts.

It’s also mentioned that duplicate cards are also automatically converted into crafting parts, so this way you’re always earning something new, such as a Strong Mind Star Card for Rey, which can increase the area of effect for Mind Trick by up to 100%. 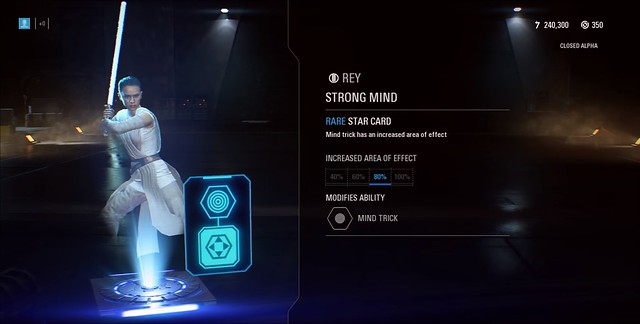 You get a brief demonstration of the differences between the cards and how they can affect the gameplay, especially since Heroes can use up to two cards at a time and soldiers get to use four during battle.

That specialist stealth card that boosts melee damage by 150% and allows you to not show up on scanners while sprinting is really going to wreck havoc during some matches.

The microtransactions in this game really will give paying customers an advantage if they spend enough to get the cards they need in order to enact a serious advantage over opponents.

So how do you feel about this? Does this change whether or not you’re going to spend $60 on Star Wars: Battlefront 2 when it launches for the PC, PS4 and Xbox One this November?