Daniel Bill is a developer from Frankfurt, Germany, working on a game called Demiurgos: Path of the Leviathan. It’s an intense, highly-charged, alternate history role-playing game set in a future on the brink of collapse.

The game centers around the rising political tensions between totalitarian regimes, pluralist uprisings, socialist establishments and imperial warlords, clashing in an alternate take on a world where Persia is a superpower, the Third Reich is bent on world domination, and Greece is a trade capital trapped between great thinkers and great mad men.

Players take on the role of a Achos Polikron, a commissioner in Politeia, and an ardent upholder of the law and the virtues of Sparta.

You get a small glimpse of the game world and some of the semi-historical underpinnings that create the infrastructure for Demiurgos‘ story.

It’s hard, of course, to get a grasp on what the game is about based on that two minute trailer, alone, but thankfully the Kickstarter page rolls out tons of details on the game, along with some hints about the gameplay and combat.

Like most other traditional RPGs, there will be turn-based combat, featuring a lot of alt-history weaponry, mostly influenced by Tesla. The grid-based system will make X-Com and Final Fantasy Tactics fans feel right at home.

Combat will be influenced by your surroundings, by your equipment and by your position on the battlefield, ensuring that different battles will play out based on a variety of variables.

There’s also a 21 minute preview video showcasing more of the game’s muted art-style, Soviet-inspired architecture. You can check it out below.

You can talk to the NPCs in the area, talk to them, give them items or investigate them.

The game also heavily centers around the political compass that moves and mutates based on the decisions that players make throughout the game. Your decisions and the way you interact with certain characters will determine whether you end up with nine different varying outcomes and three distinctly different endings. 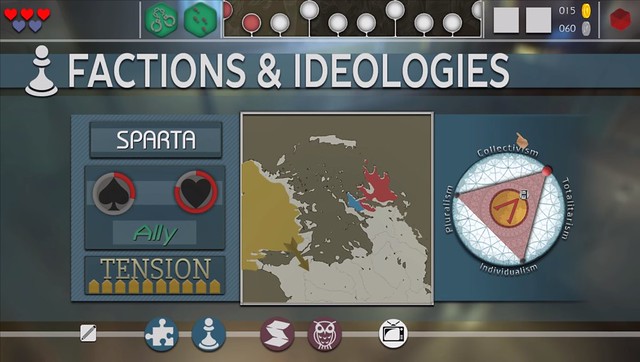 There’s a functionally utilitarian design to the city and environments, but the lights and atmosphere are contrasted with neon lights and glowing billboards.

It does seem a little odd, though, that the Hellenic culture has such a perfunctory aesthetic, especially when one would have expected something a bit more geometrically pleasing; a sort of excess in bourgeois design.

Nevertheless, the game still has some neat features under the hood, such as physics-based puzzle solving, dynamic lighting, and interactive environments.

The game’s seedy, pulp-detective look and industrial themed cityscapes gives it its own identity among the flood of other medieval-fantasy RPGs out there, so if you’re interested in a game that takes real history and applies it to an alternate-history utilizing real life political philosophies and social structures , you might want to keep an eye on Demiurgos.

The game is currently seeking funds over on Kickstarter, with a goal of just $9,503. They’re already at $3,864. However, they only have three days to go.