Asymmetric’s West of Loathing is making waves on Steam thanks to its unique visual design and ridiculous over-the-top storytelling structure. The comedy RPG is available right now for $9.99, but for those who need a little bit of help with West of Loathing, there’s a walkthrough guide available.

YouTuber 2 Left Thumbs has a multi-video playlist for the game that helps give you a general idea of what the gameplay is like and how to gain a little bit of experience points and how to play the game. You can check out the playlist below.

When you start the game you can choose your name and then select your character class, which consists of: Cow Puncher, Bean Slinger, and Snake Oiler.

Snake Oilers are able to capture snakes, extract potions and sell the potions. Bean Slingers are the equivalent of mages that allow you throw projectiles, and Cow Punchers are melee-based characters.

You can examine a lot of the objects within your home to gain a few experience points, along with grabbing a puzzle cube from your brothers room, and acquire a lock picking book from your mom just outside.

You’ll end up in a town of Boring Springs after the opening credits. You can grab the turnip on the ground. You’ll need a horse before you can head to the next town. 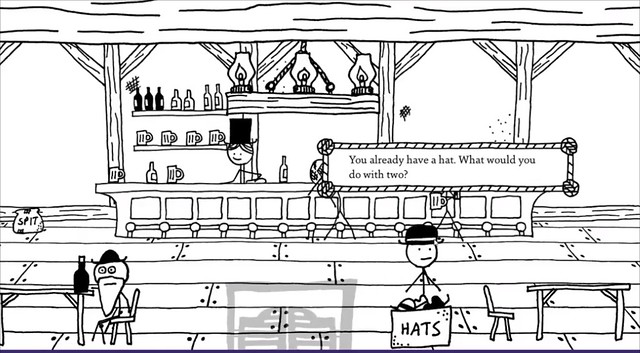 If you go into the saloon and talk to the old man, you’ll be able to grab a hat.

Look into the spittoon and keep look closer, and “never surrender”, you’ll end up getting a “nasty ring” that adds +1 muscle, +1 mysticality, and +1 moxie.

Talk to the hostler and he will tell you to meet him at the stable in order to get a horse.

If you have the needle and lockpicking skill you can open the door at the back of the saloon and head down into the basement. You can grab the “Nurse” brand whiskey. There’s also a newspaper from a pile you can take.

You can also fight a goblin in the basement… even though you don’t have a gun.

You can utilize a few skills against the goblin, however, and he’s low enough in level where you can use the default skills to kill the goblin. Outside you can talk to a trader and also don’t forget to talk to the guy in the cactus outfit on the far right side of the town. He’ll ask you about sticking a newspaper on him – the one you got from the basement – and it will level up your glamor rating.

Head into the horsery and talk to the hostler. He’ll send you on a quest to retrieve some horses using homing oats. Taking on the quest will allow you to retrieve the horses from the designated locations.

You can also pick up a side-quest from the “Sherf” by going into the Sherf’s office. He’ll send you after the Fricker Gang and you’ll get your first gun from the Sherf.

If you head to Orehole Mine you can rummage through the area to get some meat and a shovel.

If you bring up the elevator from level 3 there’s a locked box with a crowbar inside. You’ll need to expend a needle in order to picklock the crate and take the crowbar.

Bring up the plunger from level 2, and then get a blasting cap out of the crate from level 1 by using the crowbar.

Use the plunger and blasting cap on the rocks to blast a hole in the cave.

Head inside and you’ll find one of the missing horses.

Go back into town and use the shovel on the dirt pile on the far right side of the screen to uncover the mug. Take the mug and return it to the bartender.

Ask the bartender about errands and he’ll give you some meat for killing the goblin and for returning his missing mugs.

Talk to the holster about the horse you’ve returned and he’ll give you some more meat.

You can also gain XP and level up your glamor by shoveling up the poop on the ground.

Head to the graveyard and you’ll need to fight an agitated skeleton or you can dig up a pirate skeleton and fight him as well. You’ll gain an old cavalry saber, and a gold tooth.

The third horse is located at the Thousands Snake Gulch.

If you keep running into the cacti you’ll eventually unlock a perk that will make it where you’ll have your HP increased by 5.

Kill the snakes in the area and you’ll find the horse at the end of the area. Pat the crazy horse’s nose and then feed him the oats.

Head back to the hostler and talk to him and he’ll give you the rest of the money so you can buy a horse for 1,000 meat.

Once you finish the quest you can then name your horse and unlock a new map.