2K Games released the very first gameplay footage for WWE 2K18, and the video compares the graphical evolutions from WWE 2K17 to WWE 2K18. The video is only two minutes long but it showcases some of the improvements that the team has made for this year’s outing.

We first get a glimpse of the new and improved crowd, along with a look at the steel steps, ringside area, the entrance ramp and the titantron.

Our first look at a full rotation of an in-game character asset features none other than the franchise himself, John Cena. You can check out the video below.

They also show a comparison between WWE 2K17 and WWE 2K18‘s Brock Lesnar, and boy oh boy is there a huge difference.

First of all, we get to see how the directional lighting is a lot more pronounced in WWE 2K18. Physically based rendering is applied to the models for directional light casting, which is reflected in the image to the right where the arena lights are casting down on Brock from different angles, and they’re reflected across the surface normals as if the light is actually there. It’s a lot more natural and refrained from the overt use of specular maps and highlighting from the previous year’s outing. Check it out below.

They also have a comparison between last year’s Seth Rollins and this year’s Seth Rollins. The differences aren’t quite as apparent as they are with Brock Lesnar, where the self-shadowing, dynamic shadow occlusion, and the higher resolution of anisotropic filtering are readily apparent. You can see that the new shaders definitely play a part in the way that they cast shadows across Seth’s body, along with helping to highlight the natural light casting across his body. 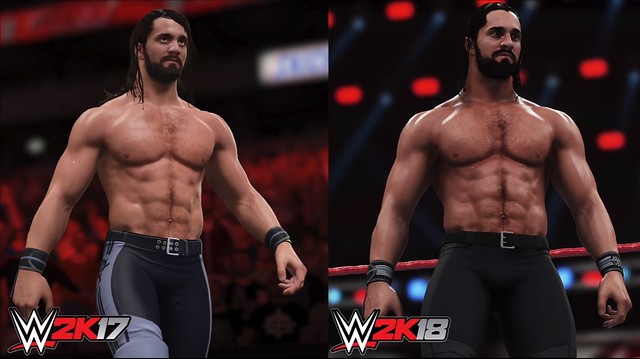 In one of the still shots before they do a side-by-side comparison of Randy Orton’s entrance, we get to see how the older scanned 3D model looked compared to the newer one. It’s pretty easy to see how much of an improvement the new scan is over the old one, and it looks even better under the new natural PBR lighting and shader system. 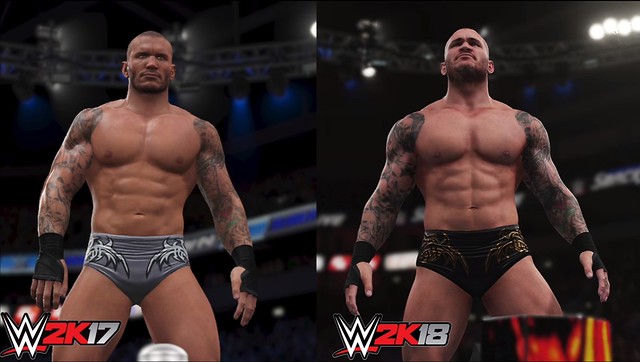 That image to the right could almost… almost pass for real-life. That’s some scary good scanning and artwork from the art department working at Visual Concepts and Yukes.

WWE 2K18 is due out this October for PS4, Xbox One and Nintendo Switch.