Now that Capcom’s marketing friendly and Disney-approved cross-over fighting game has made its way onto the Xbox One, PS4 and PC, gamers interested in the story mode for Marvel Vs Capcom: Infinite and how it plays out can find a gameplay walkthrough available right here. Keep in mind that the whole thing is extremely cringe-worthy, so make sure that you don’t have your hopes set very high for a quality story mode otherwise you will be disappointed.

YouTube outlet MKIceandFire offers up the two and a half hour playthrough of the story mode, which you can check out below.

Chun-Li and Captain Marvel then have to fight some more drones. The tutorial will walk you through the basics of the gameplay while teaching you how to perform some basic moves.

You’ll also get to play as Thor and Arthur against more drones during the tutorial phase.

Up next is Rocket Raccoon and Deformed Dante; the duo focuses mostly on projectile-oriented attacks.

The next challenge involves playing as X and Thor again, this time against the brainwashed Asgardians. It’s a handicap match but they aren’t very difficult.

You’ll need to play as Chris and Rocket again and fight off the drones and Xgardians.

Play as Thor and Spencer against Ultron Sigma and some more Xgardians.

You won’t be able to beat Sigma, just let it happen. 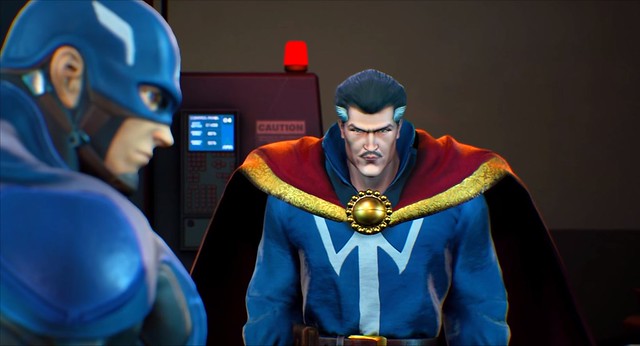 After Doctor Strange removes the helmet from Thanos, Thanos reveals that Thor is infected and has been mind-raped by Ultron Sigma.

You’ll need to play as Hawkeye and Arthur in a two-on-one against Thor.

After whipping some sense into Thor, it doesn’t matter because he will teleport back to Ultron Sigma.

The game will switch over to Valkanda where Ryu will have to fight Hulk.

Keep in mind that this is not an easy fight. Hulk will try to blast you down fast. Use combos to whittle down the Hulk’s life. 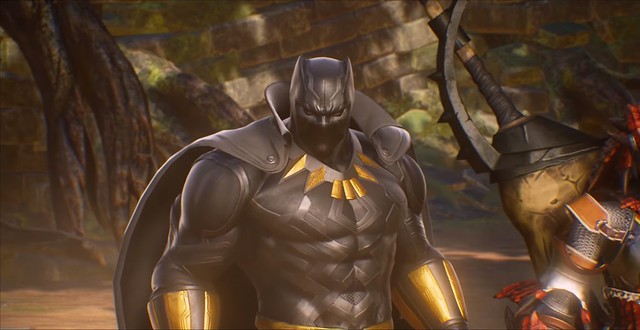 The next fight involves Captain America and Chun-Li fighting off five Ultron drones. Switch between the two in order to take out the drones.

Ryu and Hulk will then have to fight 12 drones. They aren’t hard, especially if you just use Hulk’s grabs and zoning; once you charge up the special meter, burn it with a Gamma Crush to take out the drones.

The trick here is that you’ll have to fight both drones at the exact same time, so try to keep them either on the left or right of you, but never get in between them. 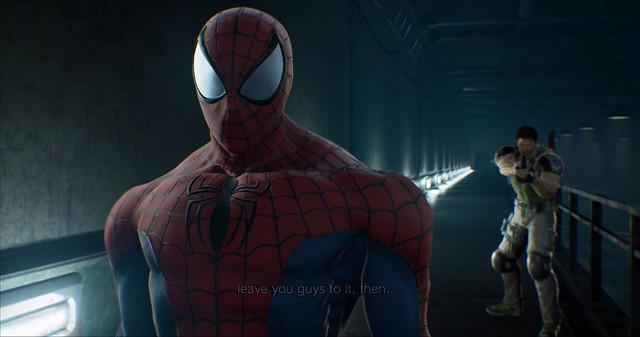 Chris and Spider-Man will have to fight some B.O.W., zombies.

Fight off the two zombies; they’re pretty easy. Another cinematic will feature Frank West being introduced.

Frank will uncover Mike Haggar in one of the tubes. He’ll burst out of the tube, all burly, wet, and hard…. up for justice.

Use Frank and Chris to fight Haggar. Keep your distance and use zoning to take him out, especially with Chris’ arsenal of weapons.

Another cinematic will play and then Spider-Man and Frank will have to fight a few more B.O.Ws. Don’t let them create space, otherwise they will use their machine guns to spam you via zoning. Stay close and pummel them with neutrals and air-juggles.

The next fight is against both a B.O.W., and Nemesis. When the B.O.W., is tagged in kill them quick but focus your specials on Nemesis not the B.O.W., because they’ll just keep respawning so long as Nemesis is alive, so kill him as quickly as possible. 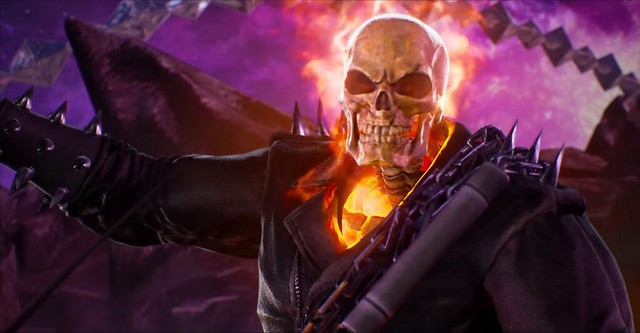 Doctor Strange and Arthur will team up to fight Firebrand and Dormammu. If you get Dormammu in the corner and keep him pressured, he’s pretty easy due to his size and stiff mobility making him an easy target.

Following the next cinematic both Iron Man and Spencer have to defend the tower from the drones while the meter builds up. The objective here is to just survive until the meter gets full. The drones will just keep coming, so watch your life and conserve your HP.

The next fight involves Thanos versus Ultron Sigma. His life will be low, so you can beat the crap out of him pretty easily. 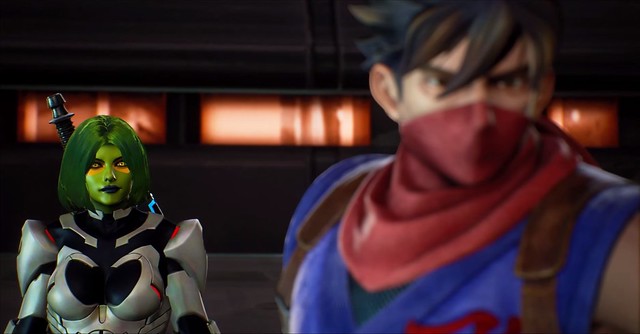 Strider and Gamora will have to fight two Ultron drones, but you’ll only have a limited number of time to do so.

Mega Man X and Rocket will have to team up in a two-on-one against Zero. He’s no where near as difficult or overpowered as he is from Ultimate Marvel vs Capcom 3, so you can just fight like Justin Wong whenever he gets to top 8 and basically go on cruise control.

You’ll then have to play as Captain Marvel and Nova, fighting against half a dozen drones.

The trick is to stay out of the way of the Grandmaster in the background because he’ll shoot at you from the background, so keep out of his range.

Haggar and West will have to fight Symbiote Spider-Man. It’s a pretty easy fight, just spank him worse than James Spader spanking Maggie Gyllenhaal in The Secretary.

Once you get done pimp-slapping Spider-Man around, you’ll have to fight Jedah as Ghost Rider and Morrigan. It’s a fairly easy fight, just zone him using Ghost Rider.

Ryu and Captain America will then have to two-on-one Jedah.

It’s extremely easy fighting Jedah since you’ll have both the time stone and the the advantage of it being a two-on-one fight.

Jedah still won’t be defeated, and it will require Thanos to defeat Jedah finally. 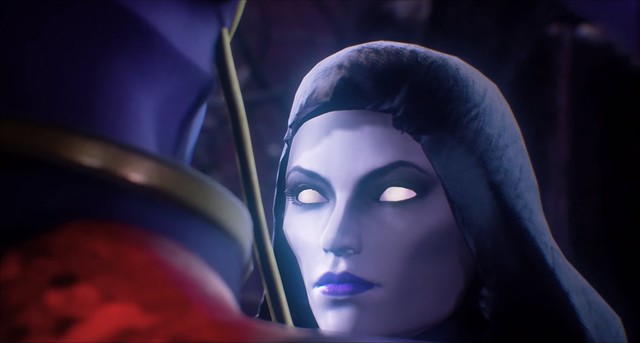 In the most well-written and interesting segment of the entire story, there’s a backstory segment showing how the convergence got underway, featuring Mistress Death, Thanos and Ultron.

Ultron ends up betraying Thanos and joining with Sigma, who perfects Ultron’s code. The two combine and then attack Thanos. You’ll have to fight Thanos but it won’t be easy.

The next fight involves playing as Nova and Chun-Li against drones. Just keep spamming your specials and you can take them out rather easily. You’ll switch over to Rocket and Mega Man X next; rinse and repeat defeating the Ultron drones.

The next fight involves Chris and Captain America fighting the drones. Once again, rinse and repeat. Same applies to Hulk and Haggar.

After the short cinematic, use Ultron Dante to fight Jedah.

Back on Xgard, the Avengers will have to fight Thor.

In the fight against Ultron Sigma you can switch between the Infinity Stones by tapping Up on the digital pad. Use the Mind stone to keep stun locking Sigma.

In the fight against Thanos, you’ll have to use Iron Man and Frank West. Use the Time Stone to keep Thanos off balanced.

Even if you defeat Thanos, Iron Man and Frank will still lose. The sides will switch and you play as Thanos and must defeat Ryu and Gamora.

For the fight against Ultron Omega, you hav eto defeat the boss before Dante dies.

You’ll have to play as Thor and Mega Man X.

Next you’ll need to play as Captain Marvel and Dante, and whittle down Ultron Omega’s life until he reaches the bottom. He’ll step back after you deal enough damage and call in help from two drones. Defeat them before you can go back to doing damage to Ultron Omega.

When he says “Contemptuous fool, we will erase you”… BLOCK!

He will fire a laser beam out of his mouth that will zap a lot of your life otherwise.

Continue to battle him until he dies. Given Marvel’s push to put Captain Marvel in everything, they make sure that she’s there to get in the final hit before Mega Man X uses the Infinity Buster to destroy Ultron Sigma.

The end sequence is pretty badass, though, as Thanos uses the dark Satsui No Hado he took from Ryu in an attempt to kill Mistress Death before the credits roll.