[Disclosure: A review key was provided for the contents of this article]

Taking place on a fictional planet called Magalan and encompassing themes from both sci-fi and fantasy, ELEX is a lengthy, challenging and flawed RPG from the action-RPG sub-genre-veterans at Piranha Bytes. Despite the less than sparkling introduction and a myriad of in-game issues, ELEX isn’t entirely without merit. Across the course of a lengthy fifty hour story, I found plenty of reasons to keep slugging away, although there were more than just a few factors that really tested my patience.

Unusually for a game set in a large open world, players are given an identity right from the start, complete with backstory and (shock horror) an intact memory. We play as Jax, an elite warrior of The Alb, who are arguably the most powerful of the four key factions on Magalan. They are also the bad guys. That said, Jax is betrayed and left for dead by his brethren in the very first scene, leaving him (and us) free to roam around Magalan in search of revenge, friendship or whatever else comes his way.

Broadly speaking, the central storyline inevitable leads to interaction with Magalan’s other factions. Beginning with the naturalistic Berserkers and leading to the machine-worshipping Clerics and the materialistic Outlaws, Jax is ultimately able to join any of them. There are some minor factions such as Alb separatists that also play a part, but wars and alliances with such groups are relatively short-lived as part of the main quest or a side story in its own right. 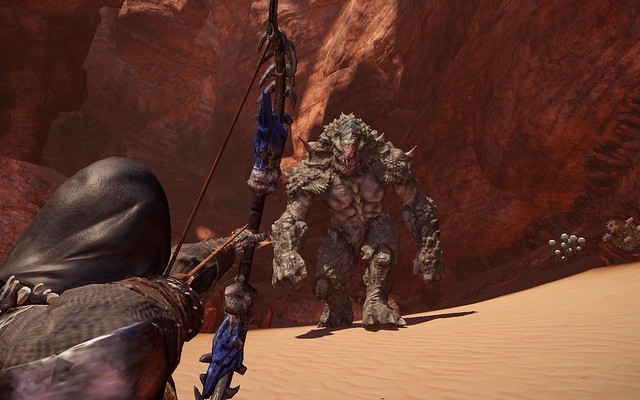 For all the factions of Magalan, daily life revolves around the struggle for ELEX. The key reason for these factions existing is because of a meteor strike on Magalan that almost wiped out all life and left civilisation hanging by a thread. The Berserkers seek to use Elex as a magical force to rekindle natural growth, whilst shunning the use of pre-meteor technology. The Clerics seek the stuff to use as an energy source to power said technology, whilst The Outlaws are a mixed bag of free spirits and raiders, really. The Alb use Elex to create emotionless super-soldiers and a key theme in Jax’s story is his transition from just such a soldier into something that thinks and feels, no matter which faction he chooses to side with.

ELEX‘s story is delivered through cut scenes and reams and reams of fully voiced dialogue. The voice acting and character design is good enough to maintain interest throughout, but it is not among the best you’ll have seen when compared to the real standout titles in the genre. It’s probably as good as Fallout 4 or Skyrim, for example, but falls way short of anything in The Witcher series. I found it enjoyable to be playing on a completely different planet, which allowed for otherworldly creatures and ideas, even if the core concept draws a lot from games like The Elder Scrolls and Fallout series’ in particular.

Unfortunately, ELEX has a lot of gameplay problems. Firstly, Magalan is a nightmare to explore for at least the first ten hours. Early quests place markers all over the map far and wide, but if you do decide to go and seek them out, you’ll be killed time after time by raiders, Alb or the local fauna. Threats of the latter kind include a huge range of creatures from mutant rats and jackals to trolls, carnivorous birds and even dinosaurs. There is a network of portals that act like fast travel points and I did find some success just dodging enemies and activating them to return to later, but it takes a long time for ELEX to become fun to roam around and explore in.

Even when you do become powerful enough to hold your own in combat and perhaps have an ally to call upon, fighting still isn’t much fun. The melee combat system uses combinations of light, heavy and special attacks alongside parry’s and dodge rolls, but it rarely feels as if it flows effectively. Ranged combat is a bit like it is in any average third person shooter, but ammunition is pretty scarce early on and you won’t even be able to handle the majority of ballistic firearms until later anyway. Enemies are tough and threatening, with almost no early game fodder at all and many creatures in the opening areas that will kill you in one or two hits at best. It’s a real baptism of fire and unless you study your mission log carefully for local tasks to build up your stats, you’ll have a very bad time.

Progression in ELEX is straightforward and broadly fine, but it is taken straight from the “how to make an RPG” textbook, with no frills added. Every level, Jax receives ten attribute points to distribute between skills like strength, constitution and intelligence, each of which affects things like attack strength, hitpoints and mana. He also receives a skill point each level, which can be spent at one of various locations throughout the game by speaking to an expert (teacher) in a given area. For example, the first person you’re likely to meet specialises in charisma training. Unfortunately, each skill requires several attribute thresholds to be met, as well as money to pay the teacher. This system punishes new players again by not allowing them to use their skill points, but (without ever saying it) it does force a level of understanding to be reached very quickly. 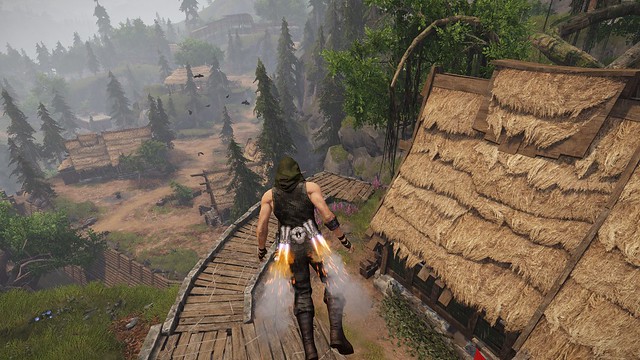 The graphics (on console at least – I tested on an Xbox One S) leave a lot to be desired. Magalan is a fairly interesting world, with a fantastic mix of forest, desert, urban decay and sci-fi locations to explore, yet the visuals look more like a polished last-gen title than a brand new game. This can be forgiven once you start to feel more connected to the story, but again it’s hard to get excited about in the early sequences. There are also a lot of glitches because of how the world is put together. From ally’s not engaging hostile enemies to getting stuck on scenery or being killed through walls, I’ve seen a fair few bugs in ELEX.

Aside from the voice acting, the sound design in ELEX is some of the worst I’ve heard for a long time. Commando rolling on wooden boards (for example) creates a noise that I was sure was an animal cry for at least the first few hours of my time with the game. Weapon effects sound as if they were recorded over a distant phone line, but worst of all the timing between sound and impact appears to be quite awry. This is one of the factors that results in the feeling of lackluster combat that I described earlier and in general, it does nothing to help create drama and ambience as you explore Magalan.

In the end, I got through all these problems and managed to enjoy the story in ELEX despite its best efforts to prevent me. It acts as a reminder that solid RPG stories can exist outside of the largest development houses, however it also highlights how far the extra spit and polish goes. If, like me, you’ve already worked your way through Fallout 4, Skyrim, The Witcher 3 and even the less action focused RPG’s like Torment: Tides of Numenara and Pillars of Eternity, then ELEX might be worth a look. Anyone who hasn’t been through that list would do better to start there. As a result, I’ll give ELEX a middling score, but it’s worth knowing that it’s closer to a Skip It than a Buy It.