Koch Media announced the official release date for MXGP 3’s launch for the Nintendo Switch. Gamers can look to get their hands on the Unreal Engine 4-powered off-road racer starting November 21st. The game is just a few weeks from release and Koch wanted Nintendonites to know that they can play more than just Mario Kart 8: Deluxe no their Switch this fall when it comes to a racing title.

MXGP 3: The Official Motorcross Video Game came out earlier in the year for the PS4. Milestone’s racer will mark its first time appearance on a Nintendo platform. You can see what the gameplay is like with the trailer below courtesy of GameTrailers.

As you can see, the game features a variety of dirt tracks from the supercross division. Physics-wise the game actually looks really good. I’m still thoroughly impressive with the mud physics, the natural lighting, the weather effects and the way the bikes handle in the trailer. How well the game will handle on the Switch during its actual release is a whole other story.

For the Switch the graphics look passable enough, but obviously not quite up to the standard of the PS4 version of MXGP 3. You can see that while the natural lighting is still in effect, the shaders for the soft multi-pass shadows seems to be turned off, and the overall shadow quality has taken a hit. 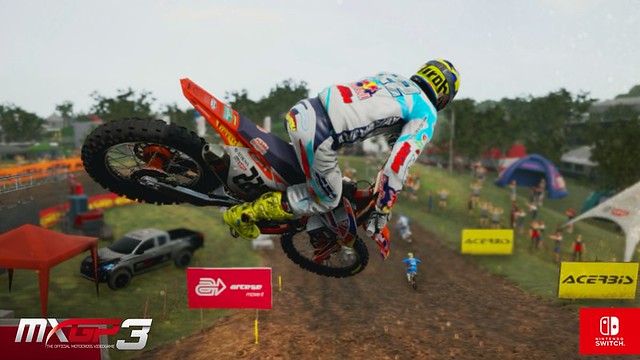 The Switch version for the game was announced back in August, following the May release of the PS4 version. We don’t get many realistic racing titles for the Switch so this is likely a welcomed change from the more arcade-centric racers currently available on the console.

You can look for the game to arrive on the Nintendo Switch at the end of November starting on the 21st, just before Black Friday.