The post-apoc world is mirrored after dieselpunk aesthetics, giving gamers a really neat looking world to race through. The game is scheduled to come out for the Xbox One, PS4 and PC in 2018. 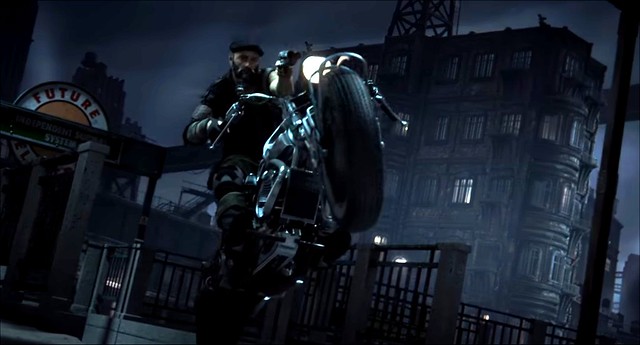 According to art director Jacek Gburczyk, the game takes a lot of inspiraction from Americana iconography but combines it with Tate’s native Polish themes. Gburczyk mentions in the press release…

“We’ve taken everything we love from America in that time period and mixed it up with our favourite parts of dieselpunk and steampunk influences to create something that has a wholly original feel and character”.

Just two hours after making the video public following the lift on the embargo, the comments and votes started rolling in, and the first bits of criticism pointed out the very obvious relationship between the white biker and the black female biker, resulting in the downvotes slowly starting to pile in.

Even though the themes and gameplay seemed original and the trailer featured a new track from the Japanese rock trio The 5678s (the same group who was featured in Kill Bill Volume 1), some critics were quick to let Tate Multimedia know that they aren’t taking kindly to the diversity angle portrayed in the trailer.

If Tate isn’t careful they could end up in the same hot pot of water that Ubisoft found themselves in with Assassin’s Creed: Origins, which ended up getting pelted for months with the comments “We Wuz Kangz” across all the videos and forum boards for the game. It even culminated in extremely heated race debates about Egyptian history.

It would be a shame if this ended up marking Steel Rats the way it did Assassin’s Creed: Origins.