Activision, Raven Software, and Sledgehammer Games’ Call of Duty: WW2 is now out and available for PC, PS4 and Xbox One. The World War II shooter takes gamers back to the European front where Americans battled it out against the Wehrmacht. For gamers interested in receiving a bit of help or guidance for the campaign mode, there’s a Call of Duty: WW2 gameplay walkthrough available.

YouTuber MKIceandFire has a complete playlist series uploaded for the game, covering the campaign from start to finish. You can check out the playlist below.

The game has four difficulty settings, including Recruit, Regular, Hardened, and Veteran.

The game opens with a brief recap of how World War II is the bloodiest war in human history.

After a lengthy cinematic the game then gives you your first taste of war with D-Day, storming the Normandy beach.

More lengthy cinematics ensue and then you’ll finally get to play the beach storming segments. It’s not easy. Use the murder holes for cover. Inch your way up the beach and follow the navpoints.

It won’t be easy. 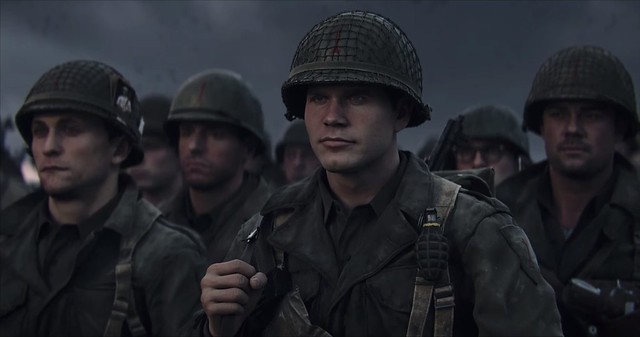 Once you reach the wire, use the banger to blow it open.

If your life is low, find a medic, he will give you a pack to restore your life. Use the right digital pad to heal yourself. You’ll also find health packs on the supply crates throughout the trenches. Take as many as you can because you will need them like John Podesta needs “cheesy” pizza. You can also request first aid kids from Zussman if he’s nearby by pressing up on the digital pad.

Once you make your way through the trenches, you’ll need to clear 5 bunkers.

Use a grenade inside the bunker to clear them out or Rambo your way inside.

You’ll have to travel inside each of the bunkers and blast the crap out of the Nazis inside.

A QTE will commence in the last bunker and Zussman will get stabbed. Save your Jewish friend after he gets knife-raped by the Nazi, and then drag him to cover. You’ll have to use your pistol while dragging around Zussman.

Zussman will need to get healed up at the medic station. Move up behind Turner to take out the artillery at the farmhouse. You can also take ammo from the NPC by pressing up on the digital pad. Move through the farm houses and blow up the artillery to finish up the mission. 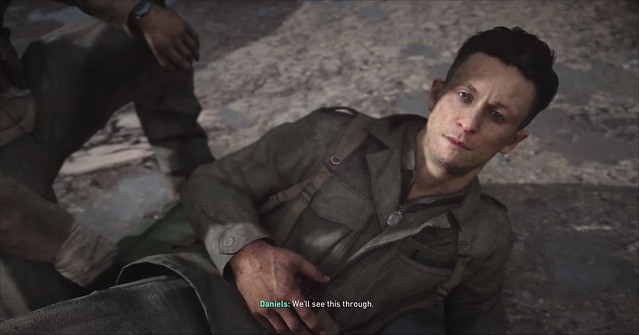 The next mission sees the platoon moving through the hedgerow. You’ll have to ride on top of the tank to get through.

After a moderate cinematic, the tanks along the road will get bombed. You’ll have to head up through the row behind turner and take out the MG nests inside the farm houses while making your way to the artillery.

Chase down the Krauts into the forest and kill them. Take control of the AA cannon and take out the planes.

Ammo runs out quick, so don’t hesitate to grab whatever you can if your ammo starts running low.

During the AA flank segment, you can hold down Square on the Dualshock or ‘X’ on the Xbox controller to swap to a sniper version of the rifle.

Before the tanks can proceed you’ll need to destroy the artillery cannons using the sniper rifle. The house is safeguarded by Krauts. Use the smoke grenade to obscure their vision and storm inside the house.

Some Krauts will surrender – you’ll be able to force them to surrender using the left trigger.

Once you finish escorting the tanks hop into the jeep and race toward Charlie. This particular segment in Call of Duty: WWII is like a rally race. Listen to Zussman’s instructions. He’ll tell which way to turn. Alternatively, follow close behind Pierson’s jeep.

A rail-shooting segment will commence and you’ll need to shoot the enemy soldiers until the mission ends.

Shoot your way through the streets and stick with your fireteam as you proceed through the buildings.

Take out the German soldiers along the way.

Half-tracks will reinforce the German troops – take out the half-track troops and attempt to rescue the allied soldiers on the ground.

Go through the church and reach the top.

A cinematic will play and then you’ll have to defend the church. A flamethrower is at the base, which will help you a ton for defending against the Germans. Do so until you have to throw a smoke grenade at the navpoint and then wait for the bomb strike to end the mission.

Daniels and the crew will team up with two British special forces in a stealth-style mission.

Use the knife to take out the Krauts from behind while attempting to stay stealthy. You can use the environment to sneak behind the Krauts and take them out.

There’s a sawed off shotgun you can grab after the mission gets loud – use the shotgun like the DOOM guy and put more holes in them than a dozen donuts.

The next segment involves chasing down the armored train in a jeep with Zussman.

Shoot at the fuel tankers on the train and blow them to smithereens.

The cinematic will finish and you’ll have to make your way through the train wreckage. The double barrel shotgun will work wonders.

This is another stealth mission. You’ll have to remember the information on the dossier when performing the mission. 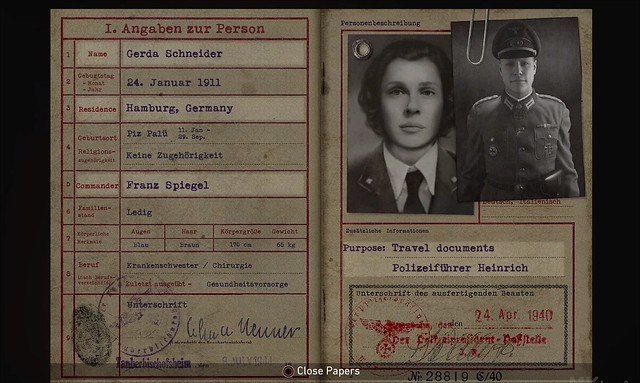 You’ll have to answer a couple of questions during this segment as you talk to a few of the German soldiers at the checkpoints. The first answer is: Travel Documents

Head into the lounge and talk to the officer looking at the map and give him the secret pass phrase. When he asks who you’re there to see, the answer is: Heinrich

You’ll then have to move into the basement and talk to one of the officers near the card table – give him the pass phrase and he’ll ask your name. The answer is: Gerda Schneider.

Ask the officer about your contact and he’ll direct you to the second floor.

Talk to the officer in the second open room and ask if he’s Fischer. Give him the pass phrase.

He’ll direct you to the third floor – talk to the secretary. Go into the room and use the window

Henrich will question you about some things. He’ll ask who arranged for his papers to be sent. The answer is: Spiegel. 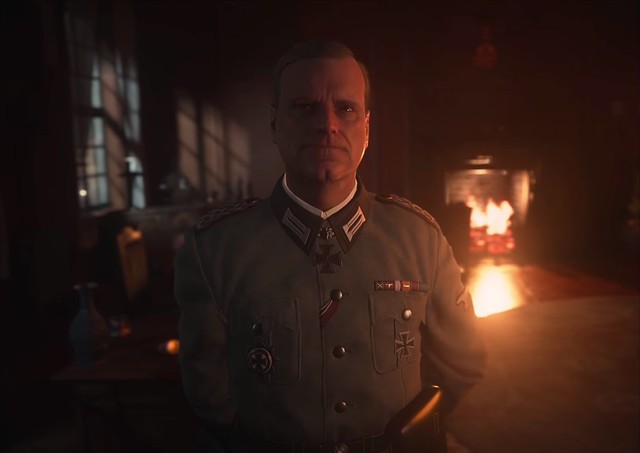 Rousseau will go full feminist on Henrich and kill him using the power of feminism after he powerslams her to the ground and begins choking her.

Once the nod to feminism is done, exit throught he window and head into the next building to take a seat at the war room.

Take the explosives and leave the room quickly.

Head down to Crowler at the guard and no matter what you say Crowler will cover for you.

Hop down out of the window outside and use the silenced Luger to take out the guards – however it will be slightly easier to take out a few of the guards stealthily to avoid getting swamped.

Make your way to the gate and plant the explosives once you’re clear.

When the bomb is planted it will switch back to Daniels and Pierson as they break through the German lines on the wet streets of Paris.

Stick with your mates and breach the German lines until you make your way to the command garrison.

Once inside the garrison you’ll get your hands on a trench gun. Shotgun those mothersuckers like ducks in a crate.

During the defense segment, it’ll be wise to use the sniper to your advantage while also throwing as many molotovs as possible.

Defend the building up until you get blown out of it.

The next mission starts with a bang, a typical M.O., for Call of Duty. You’ll have to make a run to the field phone by the front columns.

Once you get to the phone the mission will switch over to Perez where you’ll need to blast your way through the streets to provide backup for Pierson and the boys.

You’ll have to fight a few Panzers – you can only damage them by hitting it from behind. Proceed through the plaza toward the theater to help Turner and the crew.

Proceed through the streets and the torn up buildings to reach the hotel.

Storm the hotel and kill all the Nazis.

You’ll need to work with Aiello to secure the truck. Take out the Germans in the buildings on the other side behind the truck.

Make your way out of the hotel and defend the truck one final time before the mission ends.

Go give the soldier some chow at the start of the mission – he’s over by the ridge on the eastern side of the camp. Proceed to Turner to start the mission.

Head to the German bunker where the sniper is located and take out the soldiers inside. Up top you’ll find the sniper. You can also save the soldier asking for help before you enter the bunker.

Get to the checkpoint where Stiles is located and take out the Krauts to finish the mission. 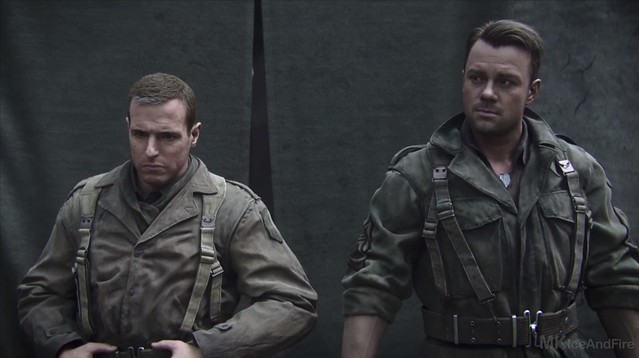 In the next mission you’ll need to work with Turner to go help provide reinforcements for Pierson.

As designated by Turner, take out the Germans on the hill pinning the squad down. There are three MGs on the hills to clear out before you can make it up the hill.

When you get to Pierson, protect engineer Pvt. Parker and make your way up the hill toward the MG nest.

After Parker bites the dust, run up to the pillbox and plant the explosives.

From there you’ll need to take out the AA gun and take the bunker. There’s a flamethrower you can take that will make clearing out the bunker a breeze. Use it.

After clearing out the AA cannons a Panzer will roll in. Get up behind it to plant the thermite charge – it won’t be enough, though.

Kill a few of the reinforcements and then plant another thermite on the back of the Panzer to round out the mission after Turner bites the dust.

Battle of the Bulge

A good ‘ole jolly winter mission set in the Belgium mountains. A short cinematic will lead you into the icy sniper fest ahead.