If you wanted to play through heists in Payday 2 as Ethan or Hila from the popular YouTube channel H3H3 Productions, your wish has been granted by Overkill Software because the duo are currently playable in the first-person shooter via a DLC pack.

The news was made available over on the official website, where there’s a brief promotional look at the two YouTubers dressed up and ready to kill and steal.

The two have their own individual models, with Hila looking like a professional hitwoman and Ethan looking like the cleaner who ate one too many donuts and bought a suit one size too small.

Both come with their own individual masks as well, which include angry clown faces with blue and red beanies on. 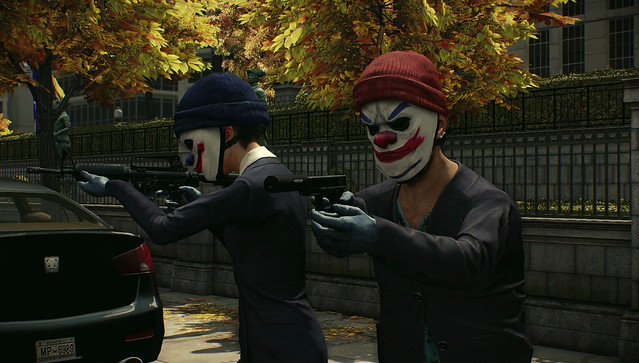 Overkill also added some new weapons for the characters, including an Airbow that fires high-velocity arrows through a pressurized barrel.

There are also some new perks added to the deck, including the Tag Team perks, which is about working together with a fellow heister. This includes regaining health, reducing cooldown timers, and utilizing teamwork to grind through the heists.

Even though I thought the DLC for Payday 2 was supposed to be done and complete, for some reason there’s still a $4.99 charge for Hila and Ethan, which kind of sucks.

To help balance out the cost of the DLC, Overkill slashed the price for both games, making it viable to pick up the first game for 75% off during the Steam Autumn Sale, and 50% off Payday 2. There have been no announcements yet about the DLC making its way to the Xbox One or PS4 versions of Payday 2, much to the disappointment of eager fanboys.

For those of you unfamiliar with H3H3 Productions, they’ve done a lot of videos over the years, and even managed to help expose the CS:GO gambling rings that took the news by storm last year. They also had to deal with a copyright lawsuit of their own after another YouTuber tried taking them down.

Anyway, you can learn more about the Payday 2 DLC by visiting the Steam store page.