It appears 2018 is the year of the revival of racing games. With Milestone set to unleash two new titles in quick succession, and Kylotonn working on an upcoming game as well, we now have Bigmoon Entertainment and Deep Silver jumping into the fray, too. The duo have announced a partnership for the release of Dakar 18 for PC, PS4, and Xbox One, and that the game is due for release in 2018.

The game features a multi-discipline series of races that involves trucks, motorcycles, quads and 4x4s. There will be both a single-player mode and an online competitive mode for multiple players.

A CGI trailer was released to give gamers a quick look at the annual rally raid race that takes place in South America. You can scope it out below.

It’s impossible to glean anything useful from a CGI trailer given that it doesn’t at all represent the actual gameplay. However, one thing that the press release and the trailer description hammer home is that this isn’t going to be another arcade racer.

Bigmoon is aiming to bring gamers a hardcore racing simulator, focusing on realistic physics and vehicle handling, while also putting players in some challenging situations when it comes to overcoming the harsh terrain.

Again, we don’t know exactly what the gameplay is going to be like until a real, in-engine or in-game trailer is released. If it’s like a realistic version of Motorstorm then I doubt you’ll hear many complaints from gamers. 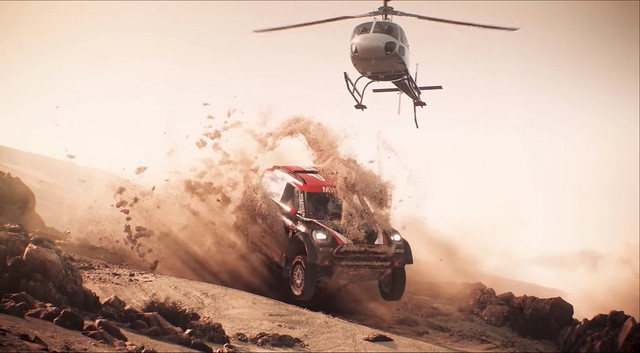 Beyond the various racing vehicle types and wild tracks, there will be official Dakar manufacturing teams, pilots, and five different racing class categories.

They also promise multiplayer modes for both online and offline play, so this should help sate the thirst of those looking for some good local competition.

You can keep track of development of Dakar 18 by visiting the official website.