Crytek’s Hunt Showdown has finally had some kind of public exposure through a limited closed beta test. We’ve finally been able to see enough footage to determine exactly what the gameplay is like for the hybrid, asymmetric co-op/competitive multiplayer, campaign-oriented shooter.

While trying to pin down a description that neatly encapsulates Hunt Showdown into a neat little genre-specific category is about as difficult as trying to frame a Tumblr feminist on the front cover of Sports Illustrated that actually fits her whole body on the page, the game itself can be summed up as an objective-oriented shooter.

The goal is to team up with your buddies, choose a hunter, equip them, and then load into the map where you’ll need to track down the boss, kill it and retrieve the relic before escaping the map. All the meanwhile other players will be attempting to do the same thing, thus the PvP element comes into play with other teams wanting to nab the loot for themselves in order to get stronger. You can see what the gameplay is like with the 40 minute video below from the Rad Brad.

Before hopping into battle you can hire a hunter. The starting hunters seem to be random dudes, but I guess as you level up through the game you can hire more hunters.

The few hunters that Brad has includes two black dudes, a hillbilly, and a gangster. Each one has two starting weapons, a tool and a consumable. Interestingly enough, when you die and you get revived by a teammate you’ll permanently lose one of your red health bars, which is indicated in the bar beneath the name of the hunter in the image below. 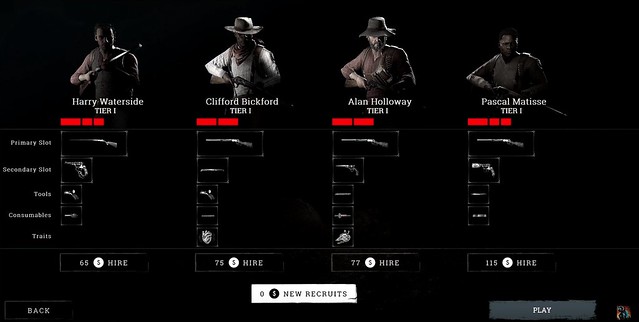 The starting hunters randomize so you don’t have to worry about getting stuck playing as someone you don’t want to play. We see a completely different set of players in the actual game. Brad also switches off the black guy and gives Harry Waterside a try.

After dying a couple of times Brad teams up with a bona fide badass who sounds like the kind of guy who would make monsters in a John Carpenter movie pay dividends with lead diarrhea.

The game is atmospheric as crap. Sound is an extremely important part in navigating the map. After jumping in you have to navigate to areas highlighted in blue and find the clues to pinpoint on the map where you have to go next. Along the way you’ll need to kill zombies and monsters. They don’t always go down easy and require some teamwork.

Being silent works wonders because it can mask your position. It’s a little bit like a Battle Royale game combined with DayZ.

Shooting and exploration is a lot more methodical than games like Battlefield or Call of Duty.

I’m actually impressed with how tense the game is and lot of it is due to the interactivity mechanics and the fact that environments play a huge role in survival.

The 3D sound is also superb and I’m shocked it was captured as well as it was in the YouTube video.

Crytek has a cool game on their hands if they can flesh out the optimization and make sure the game runs well on most rigs, unlike many of their other games.

I sure hope that they keep the game methodical and dynamic and avoid trying to make it a fast-paced shooter. Anyway, you can learn more about Hunt Showdown by visiting the official website.