Scarecrow Studios announced that they have a new game in the works called 3 Minutes To Midnight. The game hearkens back to the old days of point-and-click games that were famous for offering quirky, fun, cartoony adventures back during the golden age of gaming when gamers devoured any and every game that was fun to play and entertaining during the 1990s, especially Sierra Interactive’s unforgettable line-up of point-and-click titles.

Scarecrow Studios is hoping to rekindle some of that nostalgia but for today’s generation of gamer. This means that they aren’t just throwing together a pixel-made clicker with hipster references to Rick and Morty and inside jokes themed around their Tumblr friends they met at FurryCon.

Anyway, 3 Minutes To Midnight is a callback to the classic invasion tales of the late 1940s, themed around a mysterious conspiracy taking place in New Mexico and some sort of inexplicable events that leaves people with amnesia. Players assume the role of Betty leading to the startling three minutes to midnight.

The pitch trailer below makes it known that Scarecrow Studios have been working on 3 Minutes To Midnight since 2016 and have plans on running a Kickstarter this year so that they can finish off the game and get it out during the first quarter of 2019.

Visually the game is designed to mimic the caricatured style of 1940s Americana, back when men were actually men and women weren’t fired for being car models.

As mentioned at the top of the article, the game is a point-and-click adventure with an obvious tinge of crude humor and a play on the tropes from the era following the end of World War II and ahead of all the other social changes that came two decades later. 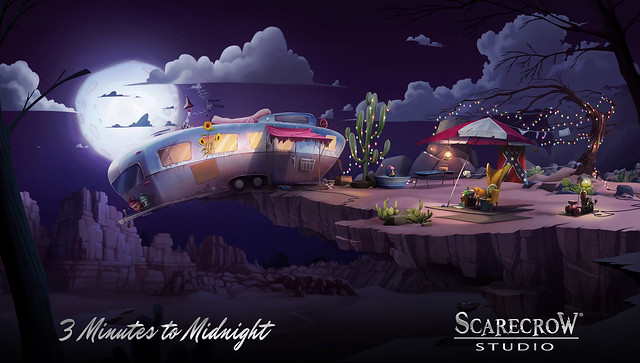 Visually the game reminds me a lot of Tim Schafer’s old games back when he used to make good games and wasn’t worried about calling minorities and women “sockpuppets”.

There’s an obvious head-nod from Scarecrow toward classic LucasArts classics like Day of the Tentacle and Full Throttle. 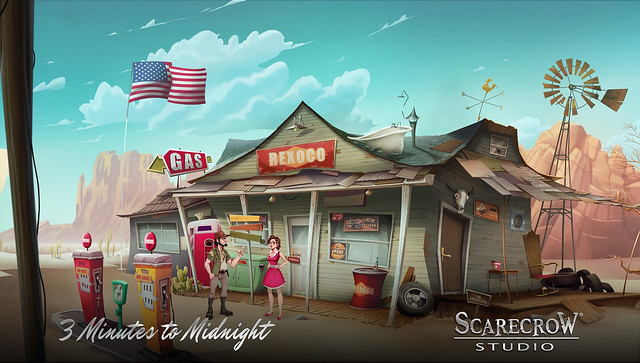 The Kickstarter will take place at some point this year where Scarecrow will attempt to finish off the development of 3 Minutes To Midnight and produce the game on PC, PS4, Xbox One and Nintendo Switch.

We’ll see how that all turns out when the Kickstarter eventually goes live. In the meantime you can check out more screenshots and info on 3 Minutes To Midnight by visiting the official website.