Buka Entertainment and Russian indie developer Sobaka Studio have announced that 9 Monkeys of Shaolin is currently in development and scheduled for release this fall on Nintendo Switch, Xbox One, PS4, and PC.

The Unreal Engine 4-powered beat-’em-up is both a love letter to old-school brawlers and a new-school attempt at evolving and elevating the genre. Not a whole lot of information was revealed for the game, but it’s from the same designers who brought you the hardcore, John Wick-esque isometric action game, Redeemer.

Sobaka and Buka are also currently set to demonstrate the game at the Game Developers Conference in San Francisco, California. You’ll find the console demo at the Xbox Lobby Bar.

A cinematic debut trailer was revealed, clocking in at just over a minute that you can view below.

The cinematic really took me by surprise. The stop-motion style animation effect – bypassing using the fill-rate of frames between key-frame poses – almost made the cinematic look hand-drawn. The added Fresnel shader for the inked graphic novel aesthetic and post-processing canvas effect to emulate cel-shading, both work well together to give the visual depiction of artwork that looks like it was painted and then later shaded in with ink.

The painterly look works well here for 9 Monkeys of Shaolin. 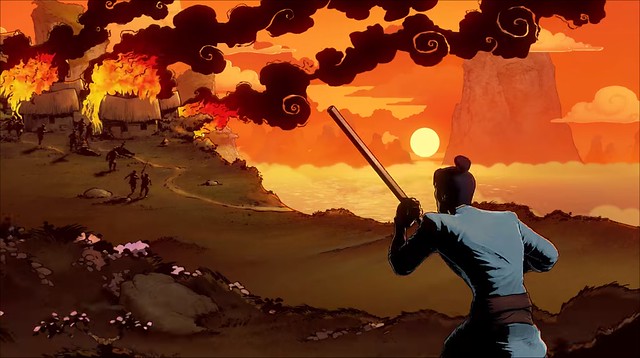 It’s a shame more developers don’t get creative with the material shaders in the Unreal Engine 4 to make full use of its visually diverse shader capabilities. You can make some truly wondrous looking art with some simple normal maps for the mesh, some material blending, and a little post-processing work.

We get a small collage of clips before the trailer ends showcasing how the actual game looks, and it still retains the inked shadow maps, but the canvas effect doesn’t appear to be present.

The full version of 9 Monkeys of Shaolin will feature 10 different types of Chinese and Japanese polearms, each with their own unique traits and moves. And there are three different styles of fighting to master, including the standard ground-based combos, aerial based juggling, and the utilization of magic.

To round it all off there’s co-op play where you can grab a friend and beat the crap out of baddies across 25 different levels set across an expansive and diverse collection of landscapes themed around ancient China.

You can look for 9 Monkeys of Shaolin to launch this fall for the Xbox One, Nintendo Switch, PS4 and PC. For more info feel free to visit the official website.