Building your very own post-apocalyptic war machine is fine and dandy so long as you get to show it off and have fun using your motorized death vehicle to cause mayhem and employ havoc on the land. In Crossout it’s kind of hard to truly appreciate your fine work of dire-road art when you keep getting blown up, drilled, and dismantled by other players in PvP, this is why Gajin Entertainment and Targem Games decided to update the game with some more PvE content featuring all new mission scenarios and single-player stages for players to enjoy. Now you’ll be able to bring your vehicle into battle and duke it out against AI without constantly getting blown up by annoying 12-year-olds.

The latest update arrives on the heels of the massive February roll-out, which included the addition of the Firestarter clan. The clan addition came with all new weapons and means of destruction for players to customize their vehicles with. The new update will give you some new foes to utilize those weapons on, including cargo escort missions, raids, and time-based scenarios. 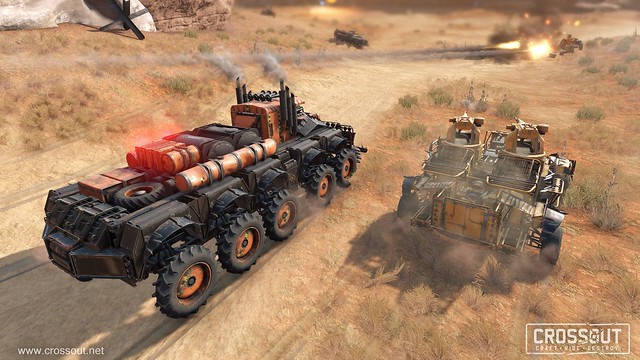 What’s fascinating here is that these PvE scenarios move Crossout one step closer to being the sort of Mad Max game that gamers have been pining for. Not just a game where you play as Max in the Interceptor, but a game where you can create your own vehicle, battle against other players, and explore single-player content in the PvE scenarios.

According to the press release there are multiple raid scenarios, eight in total, available in the newest update.

Between March 30th and April 2nd, Gaijin will also hold a special PvP brawl within Crossout as part of the April Fool’s day celebration. Players who participate in the event will unlock some special decorations and artwork for their rides.

Crossout is available right now for PC, PS4 and Xbox One. You can learn more about the game by paying a visit to the official website.