Funcom and Bearded Ladies have announced that their newest game is Mutant Year Zero: Road To Eden. It’s a tactical game with stealth elements and exploration set in a post-apocalyptic Earth where mutants rule and humans are extinct.

Ulf Andersson of Payday fame joined the project after having paid his dues with AAA development before moving into the AA sector where creativity is actually fostered instead of stamped out in replacement for ways to fit in the wantonly wrought loot boxes for the greedy suits at the major studious .

Anyway, the idea behind the game is to mix in the tactical combat from XCOM but with the role-playing from something like Shadowrun. Andersson explains in the press release…

“Our goal is to blend the deep and tactical combat of ‘XCOM’ with a branching storyline that unfolds as you explore overgrown forests and abandoned cities with your team of Mutants. Mixing that with real-time stealth gameplay gives you a unique way to approach or avoid combat situations you encounter while exploring.”

If you’re scratching your head and having a tough time wrapping your head around the concept, Funcom and Bearded Ladies released a trailer for their “labor of love”, which you can check out below.

Did no one else instantly think of Howard The Duck and that politically divisive cinematic reveal for Beyond Good and Evil 2 when the trailer first popped on?

Anyway, there’s a duck, a boar and a chick with a piece of shrapnel in her head, which is an obvious nod to Hideo Kojima’s depiction of Venom Snake in Metal Gear Solid V: The Phantom Pain.

Also there’s a reference to ED-209 from the first Robocop when they first enter the building and the rusty old robot gives them five seconds to comply. It gets clocked in the head before it can do anything, and the fake Venom Snake chick steals its shotgun.

The trio don’t get to enjoy the scavenging hunt for long due to some floating robots blasting the crap out of the building.

The trio of Dux the crossbow-wielding duck, Bormin the boar, and the zombie chick proceed to ambush the floating droids as the title fades into view.

Unfortunately gameplay footage is staved off until this year’s GDC at the end of the month. Until then you’ll have to settle for checking out the official website for brief snippets of info on the gameplay and story. 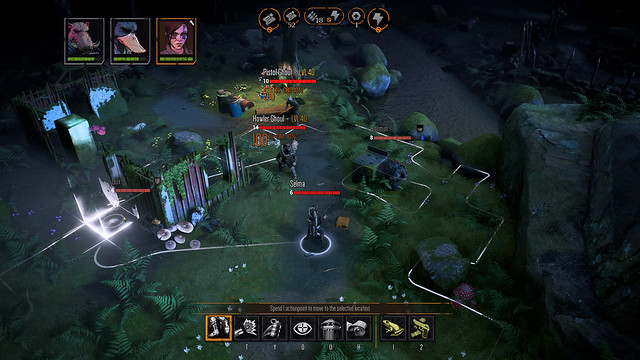 There are also a few screenshots on the Steam store page, depicting the isometric and cinematic views of the game’s combat system. It really does look like Firaxis’ rendition of XCOM.

My only concern is that Funcom seems to have brought Ole Herbjørnsen on board as a producer, even though this guy was in charge of The Mandate, a Kickstarter project that has been left to rot in the crowdfunding Tartarus of broken dreams and unfulfilled hopes. Let’s hope that Funcom keeps Herbjørnsen at arms length when it comes to The Bearded Ladies’ Mutant Year Zero: Road To Eden.