Extinction Review: Kill It Off

In what must be one of the greatest disappointments of the year (for me at least) I don’t have a lot of good things to say about Extinction. I first saw it advertised around a year ago and the still images made it look very cool. I was completely sold on the idea of a more complex, technically engaging version of Attack on Titan, perhaps featuring challenging Souls-like game play and strong replay value against a bold, visually stunning backdrop.

Sadly, aside from the fact that it is best described as a crap interpretation of Attack on Titan, none of these other promises turned out to be true. Maybe I oversold it to myself based on a handful screenshots, or maybe, just maybe, it is not unreasonable to expect more from a full price and relatively big budget release than what Extinction offers? Let’s dive in and find out what I’m moaning on about, shall we? 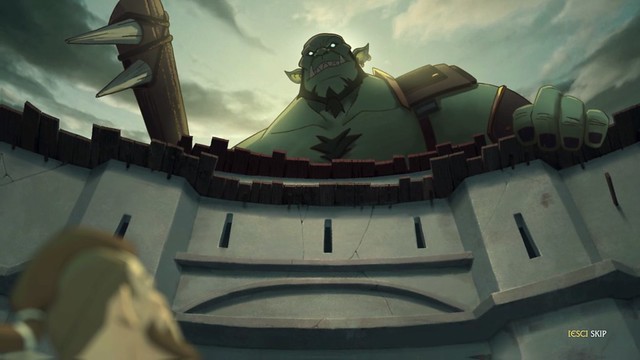 Actually, let’s do the opposite and begin with what is good, or at least acceptable. Firstly, in certain limited situations, Extinction looks OK. It’s almost always OK when standing still, although the brutish Ravenii (the gigantic antagonists in the game) are neither awe-inspiring nor terrifying to look at, thanks to the cartoonish art style and their bog standard Ork styling. When moving, as long as no Ravenii are present, things move at a fair clip – buildings, smaller enemies, trees and people all zip past as hero Avil speeds through the landscape.

The campaign is also fairly lengthy (maybe ten hours) and spans seven chapters, each of which is split up into a handful of individual missions. These include relatively simple objectives such as rescuing civilians, killing Ravenii or more complex ones such as handling several Ravenii whilst also holding a key structure. The campaign mode and mission structure is basically fine and I enjoyed the knockabout storytelling that links the missions together and aligns well to the secondary objectives dished out liberally enough.

There’s also a skirmish mode that allows players who do enjoy the game almost limitless access to more Ravenii killing, although sadly I can’t count myself among them. Unfortunately, aside from this overall presentation, I don’t have a lot more positive aspects to discuss, but that can all be summarised by stating that the game just feels rushed – in game play terms, it offers just about the bare minimum of everything.

Take regular navigation and combat, for example. In Attack on Titan, the Gear that The Scout Regiment uses to propel them into the air makes movement fun and zipping around the heads of Titans feels genuinely exhilarating. In Extinction, Avil simply runs so fast that the screen blurs and has a trigger mounted ability to do a kind of super jump. Building up momentum in the air is close to impossible due to the way scenery works, so it’s often better to simply sprint everywhere.

Combat and exploration is worse. Fighting the smaller Reaver enemies is mind-numbing in its dullness, to the extent that I didn’t even realise that new enemies had been introduced. Yes, some are slightly larger or can absorb more hits, whilst some even fly, but all of them are dispatched by hammering the attack button (with occasional dodges thrown in at random.) What’s worse is that the reason for killing them feels entirely tacked on. 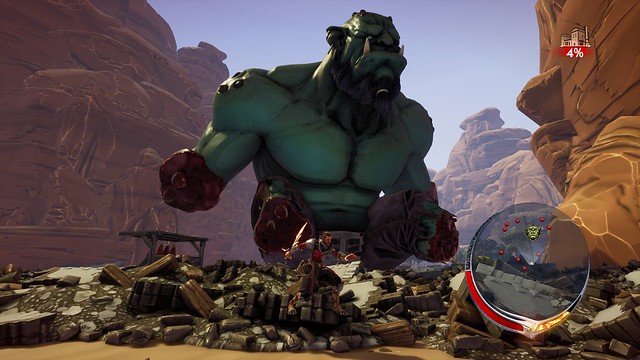 You see before you can kill a Ravenii (which I’ll discuss in a minute) you’ll need to charge Avil’s Rune Blade. This involves either killing a load of Reavers or alternatively, rescuing a ton of civilians. Let’s just touch on that for a minute – the world that Extinction is set in is literally filled with hundreds of teleportation stones, which is where the helpless peasants (who neither fight to defend themselves nor run from harm) congregate and await rescue. Why are these people incapable of activating the stones for themselves? Because of some throwaway line delivered in the first ten seconds, that’s why.

I feel like I’ve made the point, but I can’t help laboring it – the fact that civilians are just hanging around these stones waiting for death makes no sense either thematically or in terms of how the game plays. I feel like the rescue element is a tacked on addition that was perhaps made in lieu of a more engaging rescue mechanic. Perhaps the intention was for Avil to gather survivors and lead them to safety, but as time and money grew lean, the decision was made to simply copy and paste hundreds of identical teleporting stations onto each map. 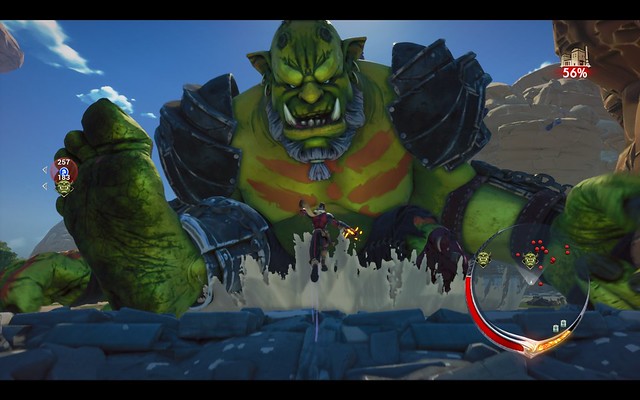 Hey ho, that’s just a very small part of the game. The real meat (literally) is on the Ravenii who, just like in Attack on Titan, can be dismembered limb by limb before a final blow is dealt to the back of the neck. The twist (OMFG) in Extinction though, is that most Ravenii come with some form of armour that takes multiple, well placed hits to remove. I was almost shocked by such tremendous innovation, but what really shocked me was how appalling the camera becomes when climbing a fallen Ravenii.

The fluidity that propels the player so gracefully into the air in AoT is replaced by a cumbersome, confusing session of smashing the jump button and hoping that Avil reaches the shoulders, rather than falling through an armpit and into harms way. Back to the Souls-like comparison that I made earlier, I wouldn’t mind if Extinction was a slower, more deliberate game that made players climb the Ravenii in a way  such as Shadow of the Colossus does, for example, but as it stands, it’s neither one nor the other. Getting up these things is just no fun.

Ultimately, Extinction lies somewhere between a Skip it and a Try it, for me. If you can spend a few hours with it without having to invest, then there is a chance that you’ll find some kind of dumb, repetitive fun in it. If you have to risk forty quid (or sixty dollars) for the privilege, then you could simulate the experience for a much lower price by simply drinking a bottle of turps (which would give you a similarly chaotic view on the world) and then climbing onto the back of a large bouncer at your local pub. Personally, I wouldn’t recommend that – and I don’t recommend Extinction, either.