Neowiz announced that Bless Online is currently available in advanced Early Access on Steam, ahead of the official public Early Access that goes live on May 30th. Yes, this is literally Earlier Access, which funnily enough was mocked last year during Devolver Digital’s mock E3 press conference. Heck, the only thing companies need to do now is start up an Earliest Access where you start paying and playing for the game while the coders are still working on the live-build in real-time.

After the game enters into full Early Access on May 30th, Neowiz expects to spend another year working on the game and fleshing out some of the content, including balancing issues, combat expansion, refined user interfaces, new field boss raids, large-scale realm-vs-realm combat, new classes, higher levels, and “community content”. I’m definitely curious what they mean by “community content” because if it is what I think it is, then that could make Bless Online well worth the time of engagement. Of course, we’ll have to wait to see what Neowiz whips up in that regard when the Early Access tenure draws to a close.

As far as the gameplay is concerned, you can check it out with the trailer below to see what it’s like.

Visually the game has oftentimes been compared to Pearl Abyss’ Black Desert Online, since both games are quite visually spectacular when it comes to actual in-game play… for MMOs, anyway.

Bless Online has been in the news quite a bit leading up to its release. Most people view it as just another generic South Korean MMORPG, but there’s a lot of good waifu material available in the game, and given today’s dearth of high-quality games with solid tools to build good looking, stable waifus, it’s likely that Bless Online could become popular with the otaku culture for that reason alone. For instance, check out the size of the knockers on the hottie below. 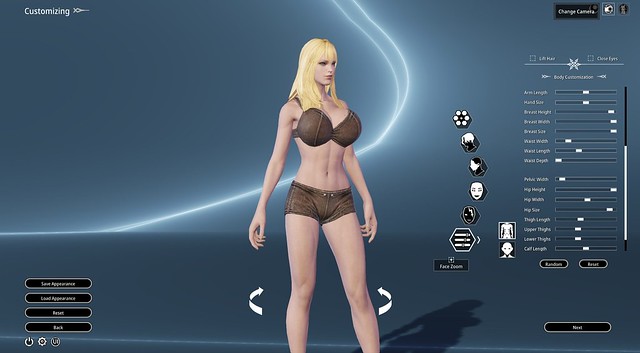 You can’t make fap-bait like that in any of the newer Western RPGs, so that’s likely going to be a strong selling point for Bless Online. Heck, I may even put together some guides later so people will know how to make the perfect waifu.

Anyway, the game features to main factions at war with one another, seven different races to choose from, five different classes to master, and the super in-depth character creation suite that I mentioned above.

If you want to learn more about the game or join in on the advanced Early Access release, you can do so by visiting the Steam store page.