Whether this particular Amazon Prime endeavor turns out to be worthwhile or not is something that’s completely up in the air, but if you’re a fan of distinct, visually enriched media, you’re probably going to like Nicolas Winding Refn’s Too Old To Die Young.

Yes, this is from the same mind that brought you Only God Forgives and Drive. I was not at all a fan of the overtly pretentious and self-indulgent Only God Forgives – even though Kristin Scott Thomas and Vithaya Pansringarm gave unforgettable performances – but I can’t spill out enough praise for the ultra-violent crime flick, Drive. 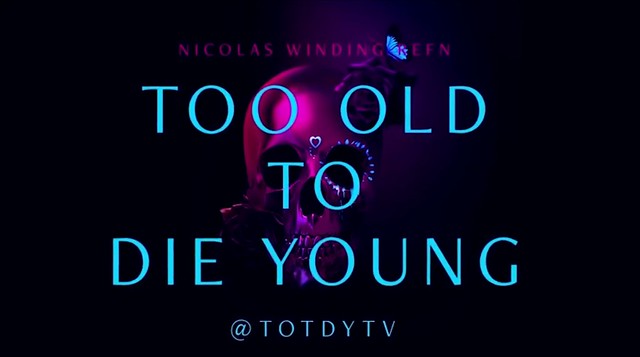 Refn is the sort of director who will never let you down when it comes to captivating your ocular senses, but can very well bleed you dry when it comes to your intellectual nourishment. With Too Old To Die Young the verdict is obviously still out on whether or not this will be as topically substantial as it is visually gripping.

It’s just a shame I can’t even tell you what the film is about. There’s a tapestry of imagery painted from an easel of grimdark splashes representing a bleak urban culture, while also tonally juxtaposing it to the faded and forgotten remnants of the old west.

No doubt, it’s a pretentious trailer, but it’s hard to look away. You can check it out courtesy of Movie Trailers Source.

In typical Refn fashion, the tonal range seems to be set between deep saturated blues and neon purples.

It’s impossible to tell what Too Old To Die Young is about from the trailer alone. It’s a mish-mash of characters involved in criminal-looking activity, murder, and apparently unspeakable consequences.

According to the Twitter account, the show will be about killers and “samurai in the City of Angels”. In which case, if anyone read that last line out of context from the rest of this article they would assume it was a cyberpunk tale.

However, the Twitter account breaks away from all the mystery and intrigue posed in the trailer by revealing that it’s going to be an Amazon Prime series starring Miles Teller and Jena Malone, along with supporting cast mate John Hawkes.

I’m guessing this is going to be Amazon’s answer to HBO’s True Detective? I don’t really know.

In any case, if Refn can reel in his style-over-substance abuse, I think it might end up being a worthwhile watch. I’m not privy to Refn getting heavy into the cult of SocJus, so that’s something viewers will have to keep an eye on. But for now, at least there’s a trailer with plenty to visually sink your teeth into as it preps for release.