First Studio’s producer Kenichiro Tsukuda, who is famous for his Armored Core games, will be helming Daemon X Machina for the Nintendo Switch. Marvelous Entertainment’s upcoming exclusive mech-action game is themed around customizing your very own battle mech and heading out into the world to complete a series of missions in order to save the world.

The hardcore metal soundtrack and lightning fast gameplay work well together, as players will hack-and-slash their way through minions while using heavy armament to blow the crap out of everything else that gets in their way. It’s like Armored Core that got ravaged in an alley by an anime strung out on speed.

Check it out below.

While a lot of games have trouble being ported to the Nintendo Switch due to the system’s hardware limitations when it comes to accommodating the portable factor of the Switch, First Studio decided to get around this limitation by focusing on the Switch’s unique hardware capabilities, specifically the GPU shaders that allow for deferred rendering and unique color saturation, so we get a game that looks great without being a resource hog.

The anime-inspired art-style also helps a lot as it reduces the need for certain kinds of shaders, and allows the team to put more effort into the art design rather than the graphics engineering. 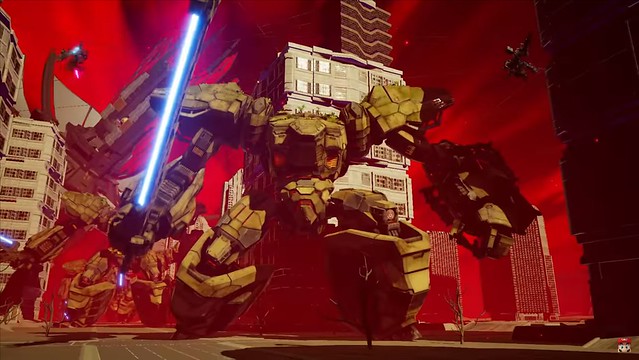 So we see things like hard shadows but not soft shadows, creating striking contrasts on the active on-screen objects, as well as the avoidance of physically based rendering to accommodate more stylized lighting.

The gameplay hints at the possibility of multiplayer, but before the trailer gets into that it instantly cuts off. So obviously there’s a lot more to share about this 2019 outing, but we’ll likely have to wait further into E3 for the details or they’ll likely arrive later on during the Tokyo Game Show or a separate Nintendo Direct altogether.

You can look for Daemon X Machina to launch at some point in 2019 exclusively for the Nintendo Switch.