While Sea of Thieves fell off the charts shortly after its release harder than Madonna took that tumble down the stairs during a concert, it’s actually back in the minds (and apparently the streaming sessions) of gamers who are interested in finding (and fighting) the Megalodon. Well, lucky for you, there are some walkthrough guides available.

First thing is first, make your way to Shark Bait Cove. It’s located on the map, and looks like a series of fragmented ellipses. Check out an image of the island below. Once you get there, you’ll then need to find Merrick’s journal. It’s located in the center of the island on a small rocky altar with skeletons and pottery, as depicted in the Sea of Thieves: Hungering Deep video walkthrough below by MassiveG.

Travel to the next location, where you’ll need to head underwater to the cave at S16.

It’s northeast of the island if you pull in from the southwest.

The next task is a bit difficult.

You’ll need to go find Merrick on the island and then meet up with five other players.

. At least one person must play the drum from Shark Bay Cove until you reach the summoning spot for the Megalodon – in the video it was located at T26. You’ll need five drums, and all five players must play the drums in unison when you reach a specific location. 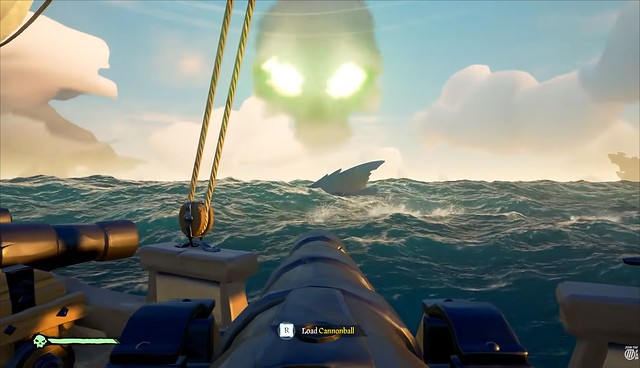 As all five players play the drums on a single boat while at the location, the Megalodon will finally appear.

What you’ll need to do is wait for the Megalodon to start charging the ship and then use the cannon to fire at the Megalodon directly in the mouth when he opens up. You’ll know you hit it when it blows up and the shark ducks underneath the ship instead of ramming it.

If you don’t hit it effectively then it will charge the ship and ram it so hard that it will spin the ship around.

The Megalodon will circle the ship a couple of times and attack. It’s best to have at least three ships ready to fight the Megalodon. Also keep in mind that the sloop will take massive damage when attacked, and players will instantly die if they’re standing on deck. If you stand below deck you can partially tank the shot.

Additionally, rifle fire does do damage to the Megalodon. So what you’ll want to do is fire your cannonballs and then use the rifles against the shark in between shots. Also don’t hesitate to use the rifles when the shark is either directly in front or directly behind the ship where the cannons can’t aim at him.

Rinse and repeat this process until the Megalodon dies. Now keep in mind that if your ship dies and there are other players still in the area, then the shark will stay spawned. If everyone who is fighting the shark dies in battle and all the ships sink, then the Megalodon will de-spawn and you’ll have to do the entire mission all over again.

Once the Megalodon is killed all good and dead, return to Shark Bait Cove.

Go back and talk to Merrick. He’ll give you a handmade figurehead for your ship.