Focus Home Interactive and Dontnod Entertainment’s Vampyr turned out to be a sleeper hit of sorts. Plenty of gamers seem intrigued with the world that Dontnod created in the new IP for the PC, PS4 and Xbox One. For those of you curious what the endings are like, there’s a quick guide to explain Vampyr’s endings.

The game starts in 1918, shortly after war veteran Dr. Jonathan Emmett Reid returns home to London, England from the World War. During the intro, the servant of the Red Goddess Morrigan, Myrddin Wyllt, talks about life and death while we see images of Dr. Jonathan Emmett Reid being bitten by Wyltt, and presumably left for dead. However, it turns out that Dr. Reid did not die, but was turned into a vampire.

After being dumped into a pit of dead bodies, Dr. Reid awakens and crawls out of the pit only to be greeted by a hysterical Mary Reid, his sister. In a fitful rage of bloodlust, Dr. Reid bites his sister, who dies but later becomes a vampire, unbeknownst to the Doctor. 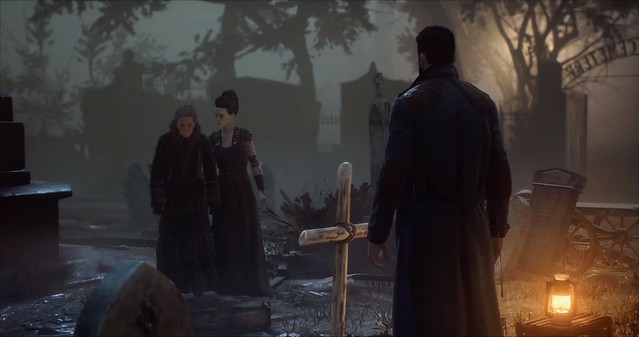 Reid has no time to properly mourn his sister’s death, however, as policemen and vampire hunters known as the Guard of Priwen begin to hunt the good Doctor like a wounded dog through rainy streets.

After catching his bearings, and attempting to make sense of himself, Dr. Reid is offered help and refuge by Dr. Edgar Swansea at the Pembroke Hospital. Dr. Swansea has been working with another vampire at the hospital named Lady Elizabeth Ashbury, and conducting experiments using her blood, unbeknownst to everyone at the hospital, including Lady Ashbury and Dr. Reid.

While battling against his own vampirism, the doctors at Pembroke attempt to deal with a deadly outbreak of both the Spanish Flu and a string of grotesque murders plaguing the Whitechapel area.

After Dr. Reid’s arrival at the hospital, the murders begin to increase, and violence spreads throughout the city like an untamed beast.

Dr. Reid worked with the local authorities to track down one of the killers, who turned out to be his sister, Mary. Mary was filled with rage and scorn, and after being defeated by Dr. Reid, asked for forgiveness and freedom from the burden of being undead.

A scourge of murders continued throughout London, even after resolving the situation with Mary. Dr. Reid is led to believe that a strain of mutated vampires known as skals are the reason for the murders. However, Dr. Reid discovers that the skals aren’t the actual cause of the spread of death and disease, but are actually a symptom. 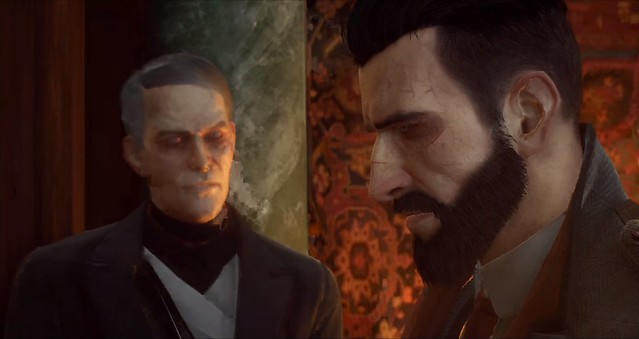 He also discovers that one of the leaders of the skals, Old Bridget, is actually the former wife of Lord Redgrave, the leader of a vampire sect known as the Ascalon Club. Redgrave claimed to be the progeny of the great knight of England, and one of the ancient vampires, William Marshal. However, Redgrave was of a poor lineage and anyone he attempted to turn would turn into deformed vampires known as skal. 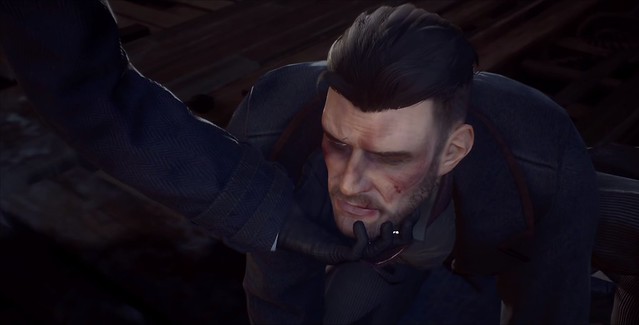 Meanwhile the Guard of Priwen, led by master hunter Geoffrey McCullum begin massacring vampires and skals throughout London. McCullum also ends up capturing Dr. Edgar Swansea, as he has a bitter hatred for vampires since they killed his parents. McCullum also hates that Dr. Swansea offers safe harbor to Dr. Reid and Lady Ashbury, and suspects that Dr. Swansea is behind the skals infestation spreading throughout London.

When Dr. Reid goes to save Swansea he discovers that McCullum was correct, and Dr. Swansea had been using Lady Ashbury’s blood to conduct experiments on the patients in his attempt to quell the spread of the Spanish Flu.

William Marshal managed to find an antidote for Lady Ashbury that suppressed the strain, but when her blood is administered to other living beings, they too become carriers for the blood of hate, also known as the Disaster.

Dr. Reid attempts to save London by concocting an antidote based on his own research, along with notes from William Marshal and Dr. Swansea. He also manages to acquire ingredients for the antidote by convincing certain rivals and allies to proffer the blood of ancient vampires and kings to cure the skal virus. After retrieving the blood of the ancients from Lord Redgrave and Geoffrey McCullum, Dr. Reid returns to the skal hive to wipe out the host of the virus for good.

An old, bitter, hateful woman with a heart filled of spite named Harriet Jones was originally presumed dead earlier in the game. However, Harriet Jones was turned into a skal at the Pembroke Hospital when Dr. Swansea used Lady Ashbury’s blood in an attempt to cure her of her ailments. The blood mutated Harriet into a deformed and foul creature, where she retreated to a hateful life in the sewers with the other skals.

The old woman eventually succumbed to the blood of hate, and turned into the Disaster, a vessel embodying the rage and anger of the Red Goddess. Disaster Harriet goes on a pure rage-induced killing spree, slaughtering the Guard of Priwen and all the skals in the sewers.

Dr. Reid eventually has to get stronger and use his new powers to fight Disaster Harriet. He is able to defeat her, but her death catalyzes an avatar for the Red Queen.

Dr. Reid manages to kill the avatar of the Red Queen, and sate her desire for carnage… for a time. The Doctor also finds out that only women can awaken the metamorphosis of the Disaster, which leads him to track down Lady Ashbury, who he finds at an old castle on the hills where she’s taking care of a dying William Marshal.

Dr. Reid discovers that William Marshal cannot leave the castle because even though he found a cure for the Disaster strain, the strain still runs thick through his decrepit veins. Dr. Reid discovers that Myrddin Wyllt, the same entity that bit him, was also the progenitor of William Marshal, and that both Dr. Reid and Marshal were to be Wyllt’s champions. However, after hundreds of years, Marshal succumbed to the effects of the Disaster strain, and requests of Lady Ashbury to finally behead him. 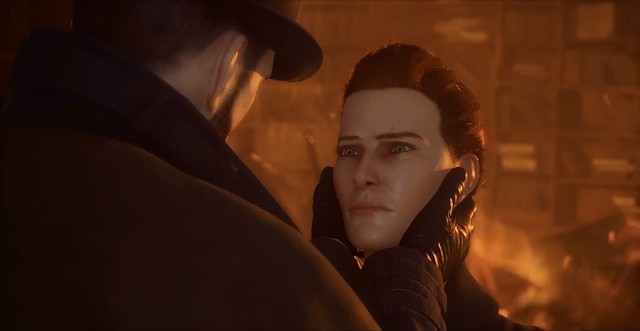 If Dr. Reid spares the people of London, and forfeits turning anyone into a vampire, as well as healing them where he can and providing them solace and medicine (while also denying Dawson his immortality) he will be able to convince Lady Ashbury to join him in a search for the cure of her carrier strain. The two will confess their love to one another and venture to America, away from the violence and disease plaguing London.

In the second good ending, if Dr. Reid has turned a few people into vampires, but did not kill anyone or murder innocents, Dr. Reid will be able to convince Lady Ashbury to join him in solitude, away from the world as they attempt to find a cure for her carrier strain. 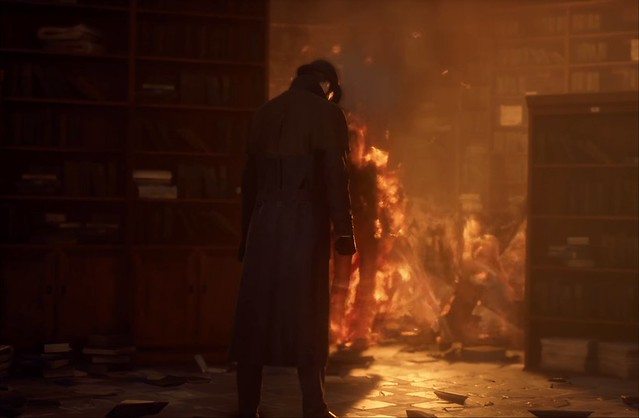 If Dr. Reid spent his time going on a hate-filled rampage through London, killing and murdering innocent people at will, Lady Ashbury will see the hate in his heart and after beheading William Marshal she will step into the flames and kill herself to spare the world anymore pain, as well as knowing that she could never live in a world with someone as bloodthirsty and savage as Dr. Reid. A passionate Dr. Reid will fall to his knees in a fit of tears, mourning the death of Lady Ashbury, while venturing out into the night as the castle burns, London falls, and the good Doctor begins feasting to his heart’s desire.

In the final ending, if you kill and murder all the innocent people of London, as well as join the Ascalon Club by turning the tyrant Aloysius Dawson into an immortal vampire, Lady Ashbury will see Dr. Reid as a power-hungry and bloodthirsty vampire. She opts to end her life, both to spare the world of her carrier strain, and to forfeit having to watch Dr. Reid evolve from an innocent vampire into the strident and confident killer lurking in London’s shadows and doing the bidding the Ascalon Club.

TL;DR: Dr. Reid is bitten by an ancient minion borne from the Red Goddess known as Myrddin Wyllt, and turned into a vampire. Dr. Reid accidentally kills his sister during his newfound bloodlust, and vows to find a cure for his vampirism. However, the Doctor gets wrapped up in the Spanish Flu epidemic plaguing London’s poor and destitute.

One of Dr. Reid’s confidants, Dr. Swansea – in his attempt to find a cure for the Spanish Flu – ends up  haphazardly creating a new kind of deadly vampire strain that spreads throughout London. This was due to Dr. Swansea using blood coming from Dr. Reid’s love interest, Lady Ashbury. Dr. Reid manages to cure the virus after many people, vampires, and mutants, are killed and massacred in the process.

Depending on the ending, Dr. Reid can attempt to work on finding a cure for Lady Ashbury, or she will kill herself to put an end to the carrier strain.