Unfortunately, this review of Vampyr is late. Unusually, it’s not late because I took ages to play the game in question, but instead because I didn’t know it existed. The day other outlets were publishing their reviews of Vampyr was the day that I started playing, which puts me in the slightly uncomfortable position of having read several opinions about the game before I formulated my own. This isn’t the first time that’s happened, but it probably is the first time that I’ve seen a game that divides critical opinion so widely.

Yes, I’ve read reviews about Vampyr that suggest it is both the “best game ever” and the “worst game of this generation” as well as everything in between. Some people praise the combat whilst others hate it, most people seem to think that the headline district stability system and the way that it links to player choice is brilliant whilst other, notable outlets report that feature as being more or less pointless or non existent.

Against this backdrop of my industry colleagues bravely punting their opinions into the communal soup that is metacritic, I simply worked through the game in an unusually leisurely fashion and it was an experience that I almost entirely enjoyed. Vampyr is a storytelling RPG that is set in a small but finely crafted interpretation of London during the Spanish Flu epidemic of 1918. The war weariness and appalling social conditions of the time are exceptionally well represented and Dontnod’s London reeks of an almost palpable squalor that sets the tone for everything else in the game.

Players take on the role of  Dr. Jonathan Reid, a newly made vampire who immediately questions the morality of his unwanted immortality, which becomes a key theme for almost every interaction in the game. Following recent frontline service, Reid is no stranger to making tough decisions about life and death, but faced with a largely helpless and pitiful populace balanced against his own need to feed, his decisions become the players to make, which is the most unique and notable feature of Vampyr.

You see, Reid can mesmerise, kill and feed upon any citizen of London, should his mesmerise level meet their own resistance. In doing so, he gains strength (or in common video game language, XP) which allows him to unlock ever more powerful skills and abilities. Should he kill someone in this way, he’ll also remove them from the game permanently, potentially unsettling the entire balance of power in the district where they live as the result of consequential effects. I should also mention that the more you know about a person, the more rich their blood will be, so completing quests and getting to know people is in your interest whether you choose to kill a person or not.

Kill a pillar of the community, for example, and the reward will usually be quite rich, but the consequence could result in a power shift that results in the death of many more innocents because monsters will freely roam the streets. Kill too many low level residents and The Guard of Priwen (a local vampire hunting society) might move in to put a stop to your hunting, which might mean that the risk is greater than the reward. You’ll never know how a district is affected until you take an action, either, so this is certainly a game that I’ll be replaying. 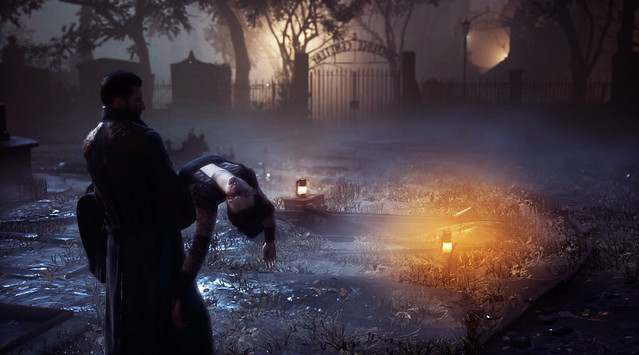 Of course, Reid will slowly gain XP from unavoidable, traditional encounters with enemies both man and beast, although this XP comes more in drips than floods. The game is therefore inherently harder as the result of playing it without killing. If Reid attempts to save everyone, he simply won’t (or shouldn’t) have as easy a time as he progresses through the frequent fights with bosses and sub-bosses. Saving people is my bag in most games and Vampyr was no exception and although I was able to complete the game despite restraining myself, I must admit to dying a few times.

On the note of combat, I actually think that Vampyr does a decent job. Reid has a primary attack and a secondary one that will usually offer a buff or status effect (for example it will stun enemies allowing them to be bitten) and the option for two handed weapons. He also has access to up to four of his specific skills at once, as well as an ultimate attack. His vampire powers include being able to launch a spear made from blood at his enemies, or to slash them to ribbons with Wolverine-style claws. He can also heal himself, cause enemies to explode and so on.

All of these abilities are powered by blood, but not the same blood as provides him with XP. Instead, the blood that Reid uses for abilities is stored as a finite resource that can only be replenished by biting stunned enemies in combat, using serums or via a few of the secondary weapon abilities. Running out of blood mid-combat is often fatal, so ensuring that you have a strategy to both deal damage and replenish blood is essential to success, whilst also creating an interesting tactical challenge.

Enemy variety is not huge, but there are several kinds of vampire to face, as well as several other supernatural foes. Human enemies come in several guises as well, from grunts with burning torches to cross wielding preachers with several powerful attacks. Named enemies are frequent and interesting, especially those who are somehow connected to the wider story beat, which is in itself a good reason to play the game. 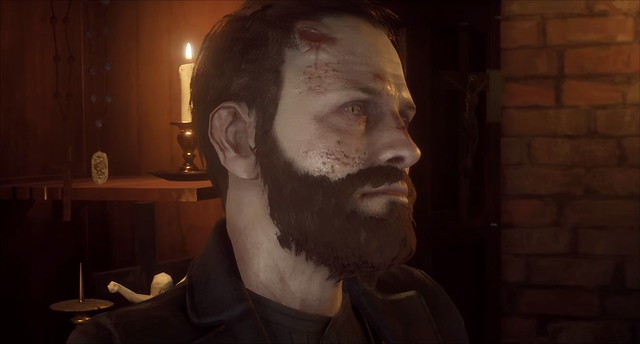 For a game that offers a number of variable outcomes (based on districts falling or being affected in numerous ways) Vampyr manages to hold a main story together that is compelling. With everything from compassionate vampires to twisted, psychopathic preachers, you’ll never quite know what to expect, although I’d be lying if I said that you couldn’t guess what you were dealing with from the very first time you meet each character, with possibly just one or two exceptions.

Vampyr is visually appealing, although it uses black, white, red and sometimes sepia tones to accentuate the mood, which can leave it looking rather muted. It’s rare to see a colour beyond this basic set except in brightly lit locations like the Pembroke Hospital which Dr Reid and his closest pals often convene at. The voice acting and music also add to the overall aesthetic and whilst the music is a creepy, industrial string ensemble that works almost perfectly throughout, the characters voices are often a little bit patchy.

As my first (and only, so far) play of Vampyr drew to a close, I couldn’t help but wonder what else the game might have been had I made different choices. Sometimes I did what I thought was right, but ultimately, I made things worse because I didn’t see the big picture. On other occasions, I got exactly what I deserved. As I made these decisions and watched the impact it had on this exceptionally well imagined vision of London, I have to say that I enjoyed almost every minute of it. The combat might be a bit clunky at times and the voice acting cheesy, but Vampyr is an ambitious and above all else, enjoyable romp.