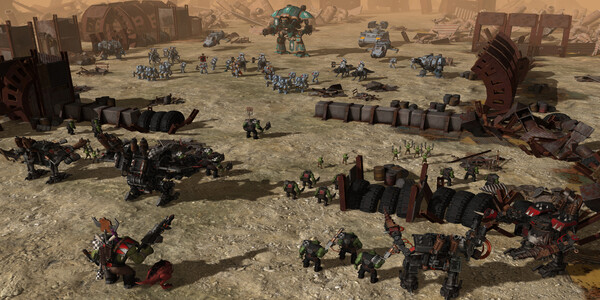 Just before E3 2018 landed and destroyed the news cycle for basic non-E3 news, Neocore Games slipped out Warhammer 40k: Inquisitor – Martyr. The game graduated from Early Access and launched with a buffet of mixed reviews from users. For those of you who bought into the game and still have it, there are some cheats available to help make the adventure a little bit easier and a lot more tolerable.

You can download the first cheat trainer from over on WeMod.com.

The Warhammer 40k: Inquisitor – Martyr trainer contains seven cheat options, which you can view below:

All the basic cheats that will help get you up and running and winning like a superstar space marine with tiger blood. The ability to kill enemies with one hit means that bosses go down faster than CM Punk did in his first UFC fight, and the unlimited ammo means you can fire off more rounds than a false flag mass-shooter in a deputy-free no guns zone.

If you’re willing to dish out some cash, there’s a premium version of the Warhammer 40K Inquisitor – Martyr cheat trainer over on the Cheat Happens page.

The trainer contains the following options:

The cheats are practically the same, so if you don’t mind using the same old cheats just at the cost paying for them… well, have it at, ace.

Warhammer 40K Inquisitor – Martyr is an isometric action-RPG. It’s designed as a Warhammer equivalent to other isometric ARPGs like Path of Exile or Grim Dawn or Diablo. If Neocore can iron out some of the wrinkles that gamers have complained about (and issues they should have fixed while it was in Early Access) it might eventually evolve into some grand.

In the meantime, for those of you who already have the game and want to cheat like you were Bill Clinton in 1999, feel free to grab the trainers right now. But don’t forget to cheat responsibly if you decide to play online, otherwise you’ll get VAC banned.