The PC version of Wreckfest will launch on June 14th, right during E3, while the PS4 and Xbox One versions of the game will be available at the end of the year during fall on November 14th.

As for the newest trailer, it’s the official launch trailer for the PC version of Wreckfest, and it’s put together quite well. It features a voiceover of a guy basically warning you away from the lifestyle of wrecks and carnage that come with being a destruction derby driver. If there’s a career mode that’s half as compelling as the voiceover makes the game seem, then it might be worth the price of entry for that alone.

After the scenario for the setup of twisted metal and ruined fenders is put into place, we then get to see the vehicles do what we all came to see them do: crash.

It’s funny because there’s a tractor that comes in and just wrecks everybody, but we also get to see the soft body deformation at play, as vehicles bend, twist, flex and crunch under shunts, bumps, grinds, and head-on collisions with other four-wheeled vehicles destined to retire in a junkyard Valhalla. 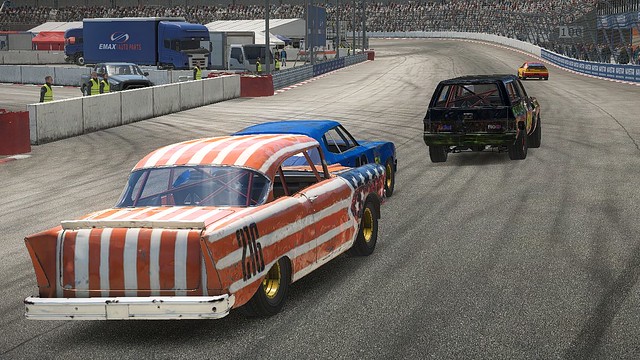 Heck, if this were the early 1980’s this would have been directed by Walter Hill, starring Burt Reynolds and Steve McQueen.

It’s a shame we don’t have directors willing to make masculine films anymore, and an even bigger crying shame we don’t have mainstream actors with the grit and testosterone of actors from yesteryear. Heck, it’s always possible a movie could be based on the premise of Wreckfest as outlined in the trailer above starring Mel Gibson and Hugh Jackman, with John McTiernan at the helm, but it’s probably best to just be glad that Wreckfest is finally coming out of Early Access on June 14th and will be available on home consoles this upcoming November.

If you’re not convinced about what you’ve seen in the trailer above, there’s some actual gameplay from YouTuber Bay Area Buggs that gives you a quick look at half an hour worth of gameplay that you can check out below.

The full game will have a price increase from $39.99 up to $44.99, and will feature single-player and multiplayer modes, along with vehicle customization, a career mode, and Steam Workshop support.

You can pick up a copy while it’s still $39.99 from the Steam store ahead of its official Early access graduation, or you can wait for the full game to launch on PC starting June 14th.