A licensed based kart-racing game from GameMill Entertainment and Maximum Games called Nickelodeon Kart Racers is currently in development with a release scheduled to for the holiday season of 2018 later this year.

The game features both competitive and cooperative gameplay modes, where players will be able to focus helping each other to win cups, unlock upgrades, and team together (or against one another) in order to secure a win in local play or online play.

The cornerstone promotional quality of the game rests in its four-player splitscreen features, which is designed to bring family and friends together. 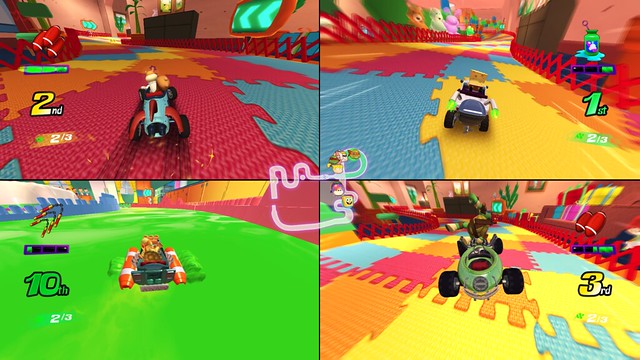 You’ll be able to play across a number of different tracks themed around popular Nickelodeon properties, along with being able to choose from a number of different popular characters from their line-up of shows, including Teenage Mutant Ninja Turtles, Rugrats, Hey Arnold! and SpongeBob SquarePants to name a few.

You’ll take the racers and speed across 24 different tracks themed around the various properties, including racing through the home of the Rugrats, or speeding through a toy store, or blasting around the tight corners of a sewer.

As you win cups you’ll unlock new parts for each of the karts, not unlike the way Nintendo has it setup for Mario Kart 8 Deluxe.

Visually it’s hard to get a gauge on the game since GameMill didn’t release a trailer for the game and all we have to go by are some screenshots.

Now the game is scheduled to release for home consoles and PC, but based on the screenshots I’m going to say that this is definitely coming to the Nintendo Switch because some of the stages are rather low-poly and the shadow mapping has fairly low resolutions with only the most rudimentary of shaders being rendered. You can see a lot of the scaled back effects on display in the image of the sewer track below. 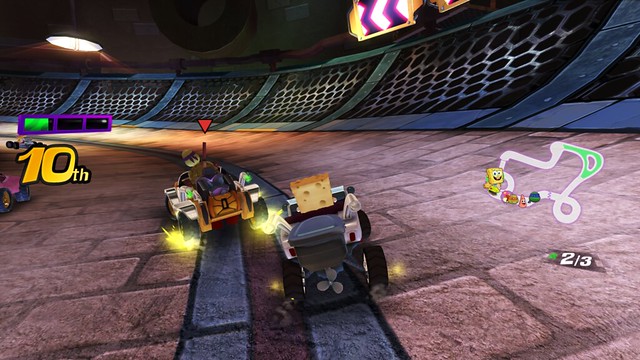 If you look off to the side you can see that the wall textures are very basic with pre-baked shadow maps to cut down on rendering load. You can also see that there’s no physically based rendering for the light emitters; the purple glowing signs on the side of the track don’t have any visual impact on the track itself, so there’s no light cast from the signs or emitters.

Also if you look at the grates on the right side of the track you’ll see where the vertices start and end on the bends to create the curve. So the LOD on the track has been reduced significantly when it comes to geometry in order to accommodate the hardware. And also you’ll note that the shadows under the karts are just fuzzy black blobs instead of actual dynamic shadow renders of the karts themselves.

I would say that the game is likely being fine-tuned to run in the portable mode for the Nintendo Switch, which is why the graphics look the way they do.

Anyway, they didn’t specify the platforms but I would guess that the game is coming to PC, PS4, Xbox One and Nintendo Switch. The game is due for release this upcoming Christmas season and will retail for £29.99 / €39.99.